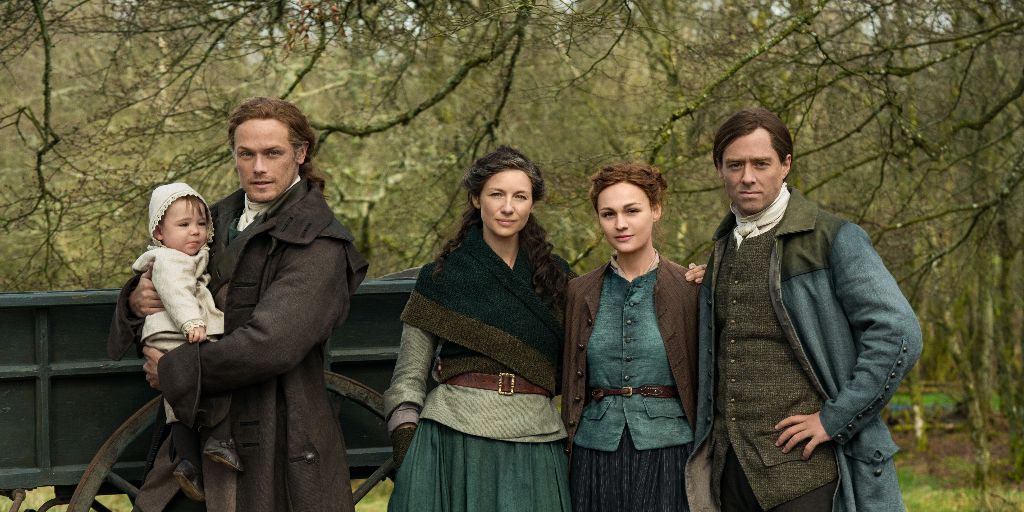 The 10 Fiery Cross Moments We Hope to See On Outlander

SPOILER WARNING: Key events from the book are summarized below. If you have not read the book, be warned of possible spoilers for the upcoming show. We can't guarantee that any of these moments are featured in season five, we are simply saying that as fans of the books, we hope to see some (or all) of these moments.

Starz's hit drama Outlander is returning for its fifth season on Sunday, February 16. Ahead of its return, get STARZ® now on DIRECTV and read on for a preview of what (possibly) lies ahead on the show.

The Fiery Cross is the fifth book in the series by Diana Gabaldon. The events of book five span two years, from October 1770 to October 1772. The Revolutionary War is on the horizon, and everyone's loyalties are tested as the Fraser clan faces a myriad of threats. It is the first book in the series that doesn't feature time travel, which makes for a slower-paced read. Even so, there are plenty of captivating moments we can't wait to see come to life on the big screen.

Roughly the first 200 pages of The Fiery Cross are dedicated to what Gabaldon has referred to as "the longest day ever." It starts when Jamie (Sam Heughan), Claire (Caitriona Balfe), and their family attend the so-called Gathering, a traditional Scottish celebration held at Mount Helicon. It is here that Brianna (Sophie Skelton) and Roger (Richard Rankin) are officially married; their son Jemmy is baptized, along with Fergus (Cesar Domboy) and Marsali's (Lauren Lyle) children Germain and Joan.

The day ends when Jamie receives word that Governor Tryon (Tim Downie) has ordered him to form a militia to enforce the Crown's laws (you may remember this moment as the season four cliffhanger). Going into season five, it will be interesting to see how the Gathering is evolved.

The Horrorshow at the Beardsleys' Cabin

When Jamie and Claire depart Fraser's Ridge to gather men for the militia, they are sidetracked at the Beardsley Trading Post. There, they meet young Fanny Beardsley (Bronwyn James) and discover that her husband Aaron (Christopher Fairbank) is an abusive old man who murdered his first four wives. What's more, Aaron has had a debilitating stroke and Fanny is pregnant.

Jamie must kill Aaron to put a stop to his suffering because there's nothing Claire can do to help him. The next morning, Fanny is gone and she has left her newborn daughter in Jamie and Claire's care. They end up giving the baby girl to the Brown family in nearby Brownsville. This whole narrative sequence should make for an incredibly creepy episode.

I am so excited... we premiere the Season 5 @Outlander_STARZ world exclusive this morning on @GMA — THEN you get to see my set visit the week of February 10 during GMA’s Outlander Week. pic.twitter.com/VBkaf2y7yc

It remains to be seen just how much the little gray kitten named Adso will appear in season five. Adso doesn't play a particularly prominent role in the book, but it's safe to say that the cat will be featured in the show. During the 2020 Television Critics Association winter press tour, Skelton shared with the audience how naughty she and co-star Balfe were during filming when it came to the cat.

"Caitriona and I quite like to sneak the cat into the scene, and then realize it’s a continuity nightmare because the cat just kind of moves around," revealed Skelton.

Balfe added, "We have had a couple of scenes where the cat will be sort of on the front porch in the scene and then by the time they say cut, we have about 15 people looking for the cat because it’s either gone under the crawl space or it’s like off into the woods. Animals are never easy to work with. There’s no training a cat."

Life on the frontier being what it was, a 20th-century doctor like Claire feels pretty helpless. For one, she is unable to convey how critical cleanliness is, or how necessary it is to have access to antibiotics. But our heroine is quite the self-sufficient problem solver. Indeed, she grows her own penicillin and uses it to treat infections and perform surgical procedures.

It really is quite remarkable what Claire is able to accomplish when it comes to medicine. The odds are against her, but she is resourceful and resilient.

The Fraser family travels to River Run to attend Aunt Jocasta's (Maria Doyle Kennedy) wedding to Duncan Innes (Alistair Findlay). It is an affair fraught with danger, as Claire and Jamie have an encounter with the nefarious Phillip Wylie (Chris Donald) and Stephen Bonnet (Ed Speleers) as they try to figure out who killed one of Jocasta's slaves.

The main reason Bonnet is snooping around River Run is that he and Lieutenant Wolff (Lee Boardman), a former suitor of Jocasta's, suspect River Run is the hiding place of a stash of gold that King Louis XV had sent to help Charles Stuart's rebellion in Scotland many years ago. This gold — the "Frenchman's Gold" — was previously referenced in book three, Voyager, and also makes an appearance in book six, A Breath of Snow and Ashes.

The Battle of Alamance

The Revolutionary War may not have arrived just yet, but there is a mini pre-war raging during The Fiery Cross – what historians have called The War of the Regulation because it involved the Regulators (North Carolina colonists and farmers) rising up against colonial officials, including Governor Tryon.

This war culminated in the Battle of Alamance, which Tryon and his men won, forcing the would-be rebels to then sign loyalty oaths to the Crown or be hanged. There were, however, several Regulators who were hanged on the governor's orders. This should provide a thrilling episode near midseason, especially because it leaves Roger forever changed.

This Season was the first time I really got to work with @SamHeughan as our characters have been very much apart, previously. I can tell you that it was a heck of a lot of fun; he's quite a darling and there's a lot of really great stuff between those characters coming up! https://t.co/G3HswQRx7F

Toward the end of the novel, Jamie and Roger go hunting and Jamie sustains a venomous snake bite. Claire is able to save him, but during his near-death experience, he and Roger are finally able to bond as Jamie confides in Roger how he can keep their family safe if Jamie dies. Jamie's recovery is also what brings Thomas Christie to the ridge and he'll be an important character moving forward.

The Plan to Catch Stephen Bonnet

Bree's ready for whatever the 18th century throws her way. #Outlander pic.twitter.com/0237xt9GOk

Jamie and Roger concoct a plan to catch and kill Stephen Bonnet for raping Brianna in book four, but the plan goes sideways and instead, Bonnet finds Claire, Bree, and Marsali with the children. Brianna shoots Bonnet, but it does not kill him. And don't think for one second this is the last we're going to see of Bonnet.

This one should make for quite an exciting final episode. Young Ian (John Bell) returns from his time with the Mohawk, bringing with him a gift for Claire in the form of a diary by "Otter-Tooth," or the man whose skull Claire found in season four that had silver fillings in it, indicating he was also from the future. At this point, Claire, Brianna, and Roger all come clean to Ian about being time-travelers.

Get STARZ® now on DIRECTV.