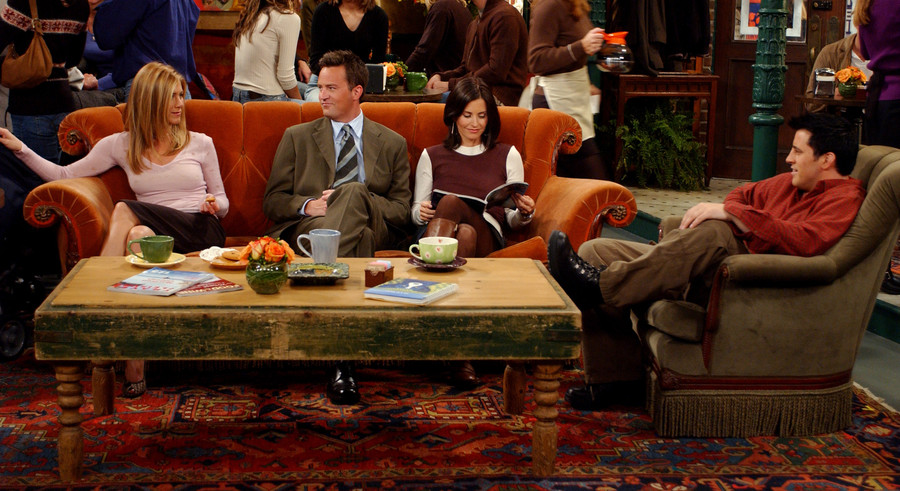 "Friends" is one of the most beloved sitcoms of all time. Viewers discovered magic the day that Rachel Green (Jennifer Aniston) ran out on her wedding and found her old friend Monica (Courteney Cox) at Central Perk.

With "Friends" available now on HBO Max, a complete series rewatch may be in order. But if you don't have that kind of time, here's a guide to the 20 best "Friends" episodes, which outlines a fun journey of the show.

The pilot hilariously establishes the characters and their various dynamics very quickly, including the fact that Ross (David Schwimmer) has been pining for Rachel since they were teenagers, which kicks off one of the major plotlines of the series.

The One With the Blackout, 1x07

Not only is it fun to watch five friends trapped in Monica and Rachel's apartment during a blackout — "Top of the world lookin'/ down on creation!" — but Chandler (Matthew Perry) is "stuck in an ATM vestibule with Jill Goodacre," where "gum would be perfection" — which also describes this episode.

This episode firmly cemented the show as some of the greatest comedy writing on TV due to the sheer amount of amazing one-liners. Plus, it has an incredibly sweet Ross-Rachel side plot.

The One Where Rachel Finds Out, 1x24

Ross' pining for Rachel comes to a head in the season one finale when Chandler accidentally blurts out at Rachel's birthday party that Ross was in love with her. Everyone's heart swells as Rachel rushes to the airport to tell him she loves him too...only to watch Ross deplane with a mystery woman. Uh oh.

The One With Ross' New Girlfriend, 2x01

Isn't it just kick-you-in-the-crotch, spit-on-your-neck fantastic that Ross comes back from China with a new girlfriend, Julie (Lauren Tom)? Plus, the side plots of Phoebe (Lisa Kudrow) giving Monica a haircut like Dudley Moore instead of Demi Moore, and Joey (Matt LeBlanc) finding out his tailor is a pervert are both very funny. "That's how they do pants!"

The One Where Ross Finds Out, 2x07

Rachel gets drunk and tells Ross that she's "over him," raising the question, "Over me? When were you... under me?" Also, Monica gets Chandler to start working out: "Give me five more [sit-ups] and I'll flash you!"

Ross and Rachel's relationship is not without its bumps. It takes Rachel seeing an old video from prom night that shows Ross' excitement over getting to take her after she'd been stood up, only to have his heart crushed after Rachel's date shows up at the last minute for her to realize what she had meant to him all for these years.

This is a classic "Friends" episode and could easily be named the No. 1 of all time — in fact, it's one of the best "bottle episodes" TV has ever seen. There are several different emotional threads playing out for Rachel and Monica, plus Chandler and Joey fighting over a chair. "That is so not the opposite of stealing somebody's underpants!"

The One With the Football, 3x09

Monica's competitive nature is an outstanding running gag through the entire series, but it gets really fun in this Thanksgiving episode because it shows Ross getting almost as competitive as his younger sister. Also, this half-hour kicked off the "Friends" Thanksgiving-episode dominance.

The One With the Embryos, 4x12

This episode battles "The One Where No One's Ready" as the greatest "Friends" episode of all time: Chandler and Joey win Rachel and Monica's apartment in a trivia game, and Phoebe finds out she's pregnant.

This two-parter features Ross' wedding to Emily (Helen Baxendale), and it isn't so much a great episode as it is a huge turning point in the series. Who can forget when Ross says Rachel's name at the altar instead of his fiance's? Plus, Chandler and Monica hook up at the reception.

The One With All The Thanksgivings, 5x08

One thing "Friends" always did really well was incorporating flashbacks into the plot. This episode features flashbacks to everyone's worst Thanksgivings...and Monica wearing a turkey on her head.

The One Where Everybody Finds Out, 5x14

This episode takes a hilarious game of sexual chicken between Chandler and Phoebe and turns it into one of the most heartstopping moments of the show: "Because I'm in love with Monica!"

Another Thanksgiving episode features the famous trifle debacle where Rachel tries to cook and the only person who likes her "dessert" is Joey.

This episode features a lot of trope-y misunderstandings, but in the end, the emotional beat where Monica and Chandler get engaged is so well done that the rest of it can absolutely be overlooked.

This wedding marks another big turning point in the show as Monica and Chandler go from secret lovers to a married couple, and leaves viewers with Rachel's pregnancy cliffhanger.

The One With the Fertility Test, 9x21

Monica and Chandler's storyline where they couldn't have biological children was incredibly well done. The show managed to still be funny while dealing with a heartbreaking issue that a lot of couples continue to face.

The One With the Late Thanksgiving, 10x08

In this episode, Monica and Chandler find out that a woman has chosen them to adopt her baby. It's a heartwarming payoff after all of their struggles.

Paul Rudd was a great addition to the show, especially since it would have been weird to have all the "Friends" romantically paired off by the end. Mike and Phoebe's wedding in the snow was a beautiful moment.

The series finale manages to tie up loose ends, with everyone moving on with their lives and Ross and Rachel finally getting back together.

The Lore Behind the Lore: Fun Insider Facts About “The Lord of the Rings: The Fellowship of the Ring”