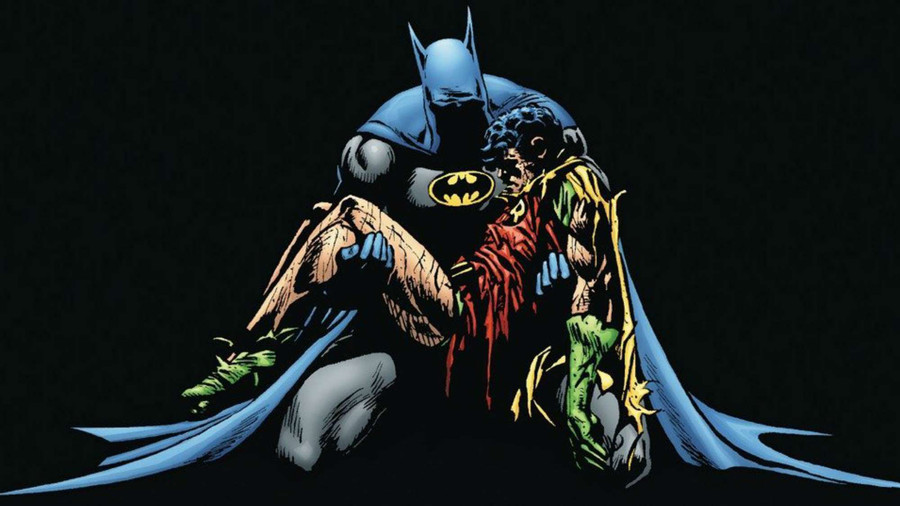 The 30th Anniversary of Batman: A Death in the Family

December 2018 marked the 30th anniversary of the legendary Batman story arc "A Death in the Family." The storyline featured one of the most innovative comic book marketing decisions of all-time. In a move that predated American Idol's phone voting and present day's social media voting contests, DC Comics decided to leave the fate of Batman's second Robin, Jason Todd, in the hands of their readers.

At the end of Batman #427, DC placed a massive ad that proclaimed the following in all-caps: "Robin will die because the Joker wants revenge, but you can prevent it with a telephone call.” The ad featured an illustration of Batman holding a badly injured Todd along with two phone numbers — one printed on each side of Batman's head. 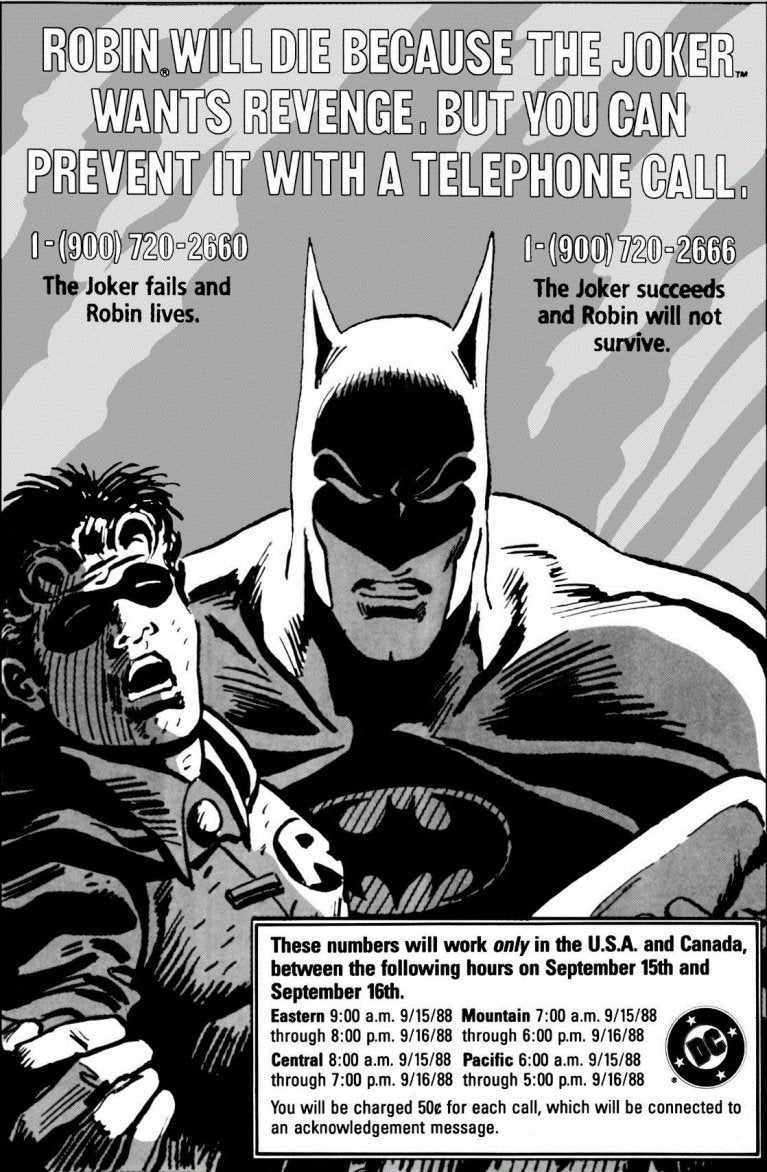 In a very dark turn of events, Batman fans voted for the Joker to kill Robin. Overall, 10,614 calls were received by DC. Around 5,343 callers voted for Robin to die, and 5,271 callers wanted Robin to survive. It was a slim margin of just 72 votes, but it was enough for DC to say bye bye to Todd.

This controversial story arc actually started with Batman #426 and ended in Batman #429. In #426, Batman told Todd that he was no longer needed as Robin. Todd had been causing some unnecessary trouble as Robin, which led to this confrontation. Batman wasn't the only one unhappy with Todd, though. Batman fans had also had enough of his antics.

Glen Weldon's comprehensive book on Batman, "The Caped Crusade: Batman and the Rise of Nerd Culture" features an interview with Denny O'Neil, the editor of Batman in 1988. This interview helps explain the details of how the "Death in the Family" storyline was conceived.

Advertisement
O'Neil stated, "They [the fans] did hate him [Todd]. I don't know if it was fan craziness — maybe they saw him as usurping Dick Grayson's position. I think that once writers became aware the fans didn't like Jason Todd, they began to make him bratty."
Grayson was the original Robin, and fans were much more fond of him than his replacement, Todd. This disdain for Todd resulted in DC trying to figure out what they should do with the character.
During a DC writers' retreat in 1988, O'Neil brought up a Saturday Night Live skit where Eddie Murphy brought out a live lobster and told the audience to call one of two phone numbers. One of the phone numbers would cast a vote for the lobster to be boiled alive on next week's episode. The other phone number would cast a vote to keep the lobster alive. Around 500,000 viewers called in to vote, and millions of Americans were talking about the skit all week.
O'Neil's mention of the SNL skit sparked immediate positive reactions from the rest of the DC team, including Jenette Kahn — DC's publisher at the time. However, the DC team wanted to make sure they leveraged the concept the right way.
O'Neil explained, "We didn't want to waste it [the phone voting concept] on anything minor. Whether Firestorm's boots should be red or yellow ...This had to be important. Life or death stuff."

Todd faced a gruesome beatdown at the hands of the Joker and then perished in an explosion in Batman #428. Despite the widespread disdain for Todd, the press and many readers were still shocked that Robin died. Some people were genuinely unhappy and angry about the decision by DC.

In an interview featured in the book "The Dark Age: Grim, Great & Gimmicky Post-Modern Comics," O'Neil professed his shock at how readers reacted to the death of Todd: "That was probably the biggest surprise for me, because of how seriously people took it. I thought it was a way to have the readers participate in the storyline — not unlike what happens in improvisational theater, for example. And hey, you know, no real kid died. This is paper and ink, and it's stuff that people make up at 3 o'clock in the morning in front of computers. But, wow, the backlash was enormous."

In an effort to defend DC, Batman, and his own reputation, O'Neil had to talk with the press for days. "For three days, I did nothing but talk on the phone to radio guys," said O'Neil. "The woman who was in charge of public relations (for DC Comics) at the time felt it was part of her job to minimize it. So, I mean, it's not that we went out and sought that attention. We dodged a lot of it. They, for example, did not let me go on television. I was grateful for that. I didn't want this face to be attached to that stunt — this face that rides the subway 20 times a week."

“It changed my mind about what I did for a living,” O'Neil said. "I just thought I was a writer and an editor working in an interesting field, a form of storytelling that I found very congenial. But after that, I realized that, no, I am in charge of post-modern folklore. These characters have been around so long and so ubiquitously that they are our modern equivalent of Paul Bunyan and mythic figures of earlier ages.”

As we reflect on "A Death in the Family's" story arc during its 30th anniversary, we can see how one decision can change the course of comic book history and impact the real lives of human beings in the process. After Jason Todd died, Batman was never the same — and neither was Denny O'Neil's life.

Batman is a mythic figure, and his diehard fans have constructed their own romanticized versions of the character in their head. This is the perfect illustration of just how powerful a great comic book character can be. They can change lives — for better or worse.

If you're interested in learning more about "A Death in the Family," you can check out the video below.