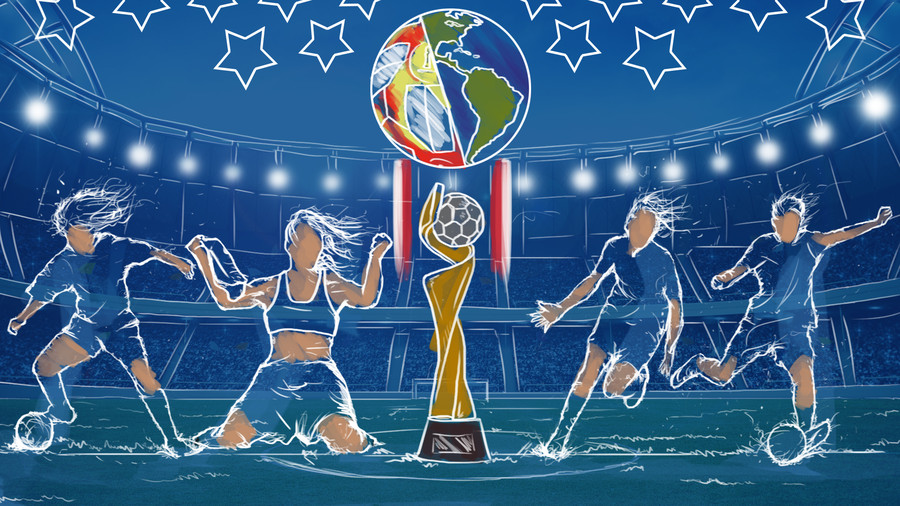 The 4 Most Iconic Moments in USWNT World Cup History

As the United States Women's National Soccer Team prepares for their 2019 FIFA Women's World Cup opener, it's worth considering just how much the team has already accomplished over the past 28 years.

The team's first World Cup victory back in 1991 may (or may not) seem like ages ago. But when thinking of all that the USWNT has done to thrill their fans en route to not one, not two, but three stars over the crest, the sheer magnitude of iconic players and moments over a relatively short period of time is staggering..

Let's zoom in on the best of the best, the moments emblematic of the way the USWNT has led the charge into an increasingly competitive and compelling world of women's soccer.

The 1991 U.S. team was not the overwhelming favorite it's become in recent World Cups. In fact, just reaching the final registered as a surprise, according to the best-known player from that group, Michelle Akers.

"No one expected us to get this far,” she said prior to the final. “We'll be disappointed if we lose. If we do our best, I don't think anyone can beat us."

A primary reason the U.S. reached the final, however, was Carin Jennings, now Jennings-Gabarra. In the semifinal against vaunted Germany, Jennings started scoring and just didn't stop. Like Lloyd in 2015, Jennings scored three first-half goals,  the third on the most poised bit of footwork, waiting Germany's goalkeeper out and then slotting it past her to give the U.S. an insurmountable 3-0 advantage.

Jennings had to navigate her way forward in an American sports landscape that still didn't provide many opportunities for women athletes, and even fewer for Americans with an interest in soccer. Yet she found her way into the record books, and helped lift that 1991 team to a World Cup.

Even so, hard as it is to believe now, with the record crowds and millions who watch on TV, the nation's collective response was nonplussed. When Jennings and the rest of the team arrived at JFK Airport after securing the win, maybe a dozen people were on hand to greet them, veteran soccer reporter Michael Lewis told me back in 2015.

But they were the first, and responsible for all that came next. Even if it's retroactive, the hat trick from Carin Jennings is a seminal USWNT moment.

It's worth remembering that when Brandi Chastain put the ball in the upper right corner, past China's goalkeeper, that moment only exists because of several other iconic accomplishments ahead of it. There is no goal seen 'round the world without Kristine Lilly's header in sudden-death overtime that same game, or the diving save by Brianna Scurry that set up Chastain's game-winner. It was a series of moments, capped by Chastain's score-and-reveal, her black sports bra a signal to women everywhere that there was room on the field for them.

Chastain's left-footed shot capped a summer that meant more than just a second star on the U.S. jersey. As the century concluded, it was the USWNT that reinforced the lesson that this country could collectively obsess over a women's sporting event and team. If Jennings was forgotten by the time she reached American soil, at least at the time, Chastain is still referenced all the time, even 20 years later.

At the sendoff press conference for the 2019 team, Alex Morgan was asked about the iconic 1999 team.

“The '99ers had a huge impact on me, and growing my passion to want to play,” the American forward said back in May. “And being good friends with a lot of them now, I draw a lot of my inspiration from them even now. Great people that really shaped the history of this program.”

And yet, for all that legacy, would the team be remembered so fondly, could they have pushed women's soccer forward quite so forcefully, without Brandi Chastain's deft left foot?

No, the 2011 USWNT didn't join its predecessors in 1991 and 1999 in winning a trophy. That year's final saw Japan win on penalty kicks, leaving an American squad with an in-prime Abby Wambach, young Alex Morgan, and goalkeeper Hope Solo just shy of the championship.

But the 2011 squad signaled something else, a hallmark of what the USWNT has come to be known for almost as much as its soccer: a voice.

Few have been more significant in this American evolution than Megan Rapinoe, whose willingness to speak out on issues social, political, and economic have coincided with a truly remarkable playing career.

Nowhere did those two facts come in closer proximity than when she scored a screamer of a goal against Columbia early in the second half of a 3-0 group stage win, and then promptly ran to the microphone at the corner of the field and, well, here, watch for yourself:

For Rapinoe, the moment represents who she is—her extroverted personality fully at ease with how she presents herself to the world. For what the USWNT has come to represent for women, especially this decade, Rapinoe's ability to translate that into both the way she finishes on the field and the way she speaks off it has mattered. Her representation matters. As long as there are people talking soccer, Rapinoe will be among the first players discussed. This goal, and what came right after, will lead the discussion.

Well, it's not that impossible. For most people, it's her Jennings-esque hat trick in the first half of the USWNT's 5-2 win over Japan to win the 2015 World Cup.

Simply scoring three in a half would qualify Lloyd for immortality on its own. But the way she scored that third goal, the kind of emotional build up to fans seeing... this:

Like in 2011, the U.S. came in against a quality Japan team with the trophy one win away. This time, Carli Lloyd made sure there'd be no doubt, no suspense, no penalty kicks. If the Chastain moment crystalized the drama of her age, Lloyd invokes the signature characteristic of her career here: pushing her limits to absolutely dominate.

Carli Lloyd will be coming off the bench, at least to start, in the 2019 World Cup. But make no mistake: it will be an upset if she fails to provide a coda to a career with so many peaks. And every single person watching will be thinking, every time she gets the ball, that she can score from anywhere on the field.

The 2019 Women's World Cup is sure to yield its share of iconic moments. If their history is any indication, the USWNT will add to this list. Catch all the action and more from FIFA Women's World Cup France 2019™.