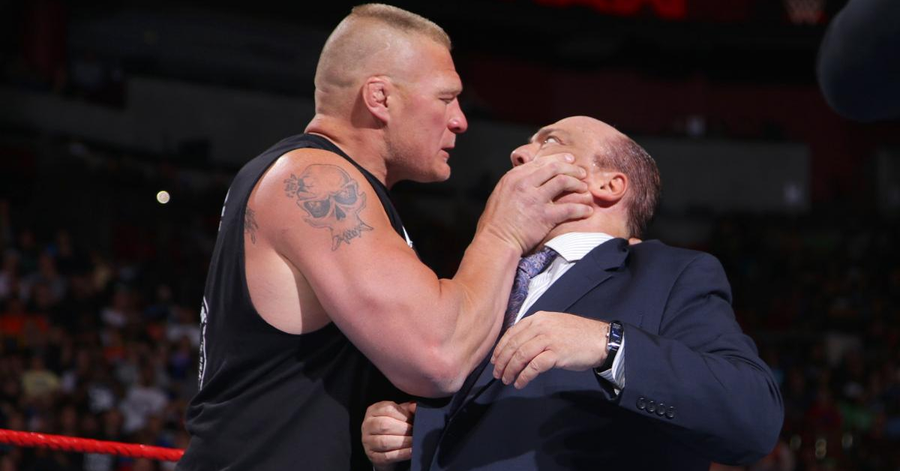 The Beast Shows Up, Grandmas in Peril, Babymania – WWE THIS WEEK: 5 THINGS WE LOVED AND 3 WE DID NOT

SummerSlam is almost upon us with several matches having been confirmed and a few more taking shape: Will the Big Dog finally usurp the Beast? Will Becky Lynch and Charlotte come out of Brooklyn with their friendship intact? Will Miz and Daniel Bryan finally have a baby on a pole match?!

Find out how the WWE Superstars are faring this week on their road to the Barclays Center in Brooklyn on August 19th with five things we loved (and three we certainly did not) below!

Say what you will about Brock Lesnar’s love (or lack thereof) of professional wrestling and the WWE Universe, but when he’s good, he’s FRIGHTENING.

The Brock Lesnar that showed up on RAW Monday was the Brock Lesnar that we’ve been hoping would show up for years now. An unstoppable, uncaring, unfeeling beast who needs no one by his side to get what he wants, not even his longtime “advocate” Paul Heyman. Unless it’s a steak, medium-well, a baked potato, and broccoli, steamed. Either way, only a monster eats steak medium-well.

Who knows if he’ll keep it up all the way to SummerSlam, or if this signals a switch of allegiance for Heyman, or a swerve of epic proportions culminating in Roman Reigns counting the lights in Brooklyn once again, but we are suddenly looking forward to the same SummerSlam match that most people (including us) balked at only a couple weeks ago.

LOVED: Miz and DB Go IN. Again. Plus, More Babies!

We thought it would be hard to top the drive-by babying from last week's SmackDown Live!, but this week’s back and forth between Daniel Bryan and the Miz came very close to being their best work since the infamous Talking Smack promo from two years ago that lit the fuse on this feud to begin with.

Bryan came to the ring to shame the Miz for hiding behind his wife and “baby” last week and implored him to accept a match against him at SummerSlam in Brooklyn.

The Miz, who was, as an A-list celebrity, on location from the set of his show Miz and Mrs., joined SmackDown Live! via satellite (as one of his stature does) simply to pump the brakes on DB’s roll.

Stating that Bryan’s improbable comeback was nothing short of an egregious failure and that he should just go back to wrestling in the same high school gyms he was frequenting before Miz took him under his wing 10 years ago (kinda), the A-Lister made a strong case for not accepting a match with the Yes Man at SummerSlam.

He then proceeded to unleash even more infant-centric vitriol calling Bryan a crybaby complete with imagery and sound effects of twelve inconsolable children.

Miz can’t get punched in the face soon enough.

LOVED: AJ Styles is a Terrible Father (According to Samoa Joe)

According to Samoa Joe, AJ Styles is a great champion that he respects very much. This was nice! However, since this is Joe we’re talking about, it didn’t stay warm and fuzzy for very long.

Last week, AJ told the WWE Universe a heartwarming tale about being able to stare into his daughter’s eyes, telling her that she can be whatever she wants to be… before he got choked out by Joe, cementing their title match at Summer Slam.

This week on SmackDown Live!, Joe had a counterpoint to make. Claiming that AJ was barely home enough to even hug his child much less look her in the eye and tell her much of anything. Because Joe knows that AJ is much more comfortable being on the road and living out of a suitcase than he is being a husband and father.

Nothing I can say here will do justice to the pure evil that is current NXT Champion, Tommaso Ciampa. I mean…

And this was the SECOND time that Ciampa taunted this SAME poor woman!

I will fight any grandma. Any day. Any time. #GrandmasDontScareMe pic.twitter.com/yrCxdFBLkt

Having ridden a rollercoaster of emotions the past few weeks (months? Years?), Sasha Banks and Bayley appear to finally be on the same page this week as they teamed up to form a kickass tandem dubbed the  “Boss and Hug Connection” in a match against Riott Squad members Liv Morgan and Sara Logan.

While we’re certain this won’t end well, as these things are wont to do, we’re happy to see these two bossin’ and huggin’ their way to SummerSlam (and perhaps the much rumored Women’s Tag Team titles).

NOT SO MUCH: Becky Lynch and Charlotte to Clash at SummerSlam

A bit of a disclaimer: This is actually really good! But our love for Becky Lynch and her constant uphill battle to the top of the mountain makes the fact that Charlotte, her genetically superior BFF, is now one of her opponents (in addition to the SmackDown Live! Women’s Champ, Carmella) at SummerSlam puts this in the DO NOT LIKE column.

Can Bex get out of this one with her friendship intact?! If we know anything about wrestling, we would say most certainly not. Honestly, we just hate to see Becky unhappy. Hopefully this goes smoothly for both women and nobody gets hurt. That’s how wrestling works, right?

NOT SO MUCH: Woken Matt Hardy Retiring?

This isn’t so much a thing that happened as much as speculation based on a tweet. Which, given the current state of things, is all we need to know. Matt Hardy retirement CONFIRMED?! (But hopefully not.)

To all that supported me in the independents & OMEGA..

To the fans of Team Xtreme..

To the Mattitude Followers..

To the OUTSPOKEN fans who brought me back in 2005..

To the people who backed me when I was REINCARNATED in pro wrestling..

To the #WOKEN Warriors..

NOT SO MUCH: Death of Nikolai Volkoff, Grand Master Sexay, and Brickhouse Brown

The wrestling world lost three legends in one day this past weekend as Nikolai Volkoff, Brian “Grand Master Sexay” Lawler, and Brickhouse Brown all passed away within hours of each other.

Volkoff, born Josip Hrvoje Peruzović in Croatia, rose to prominence in the 80’s as one half of a Cold War-era bad guy team alongside the Iron Sheik and managed by elderly fashionplate, Classy Freddie Blassy. Despite not actually being Russian, Volkoff’s insistance on singing the Russian National anthem prior to each match garnered so much ire from American crowds that Volkoff and Sheik were forced to cook dinner in their hotel rooms for fear of getting attacked while out and about. His “evil Russian” persona aside, Volkoff was known to be one of the kindest and gentlest people in the business outside the ring. He was 70 years old.

Brian Lawler aka Grand Master Sexay, a member of the Attitude Era team, Too Cool, alongside Scotty 2 Hotty and Rikishi, and son of the legendary Jerry Lawler, sadly hung himself in a jail cell after receiving another in a long line of DUIs and other various run ins with the law in recent years. He was 46 years old.

While never a household name, Brickhouse Brown wrestled for nearly every prominent promotion in the 80s and 90s including WWE, AWA, USWA, and the CWA. Feuds with Terry Funk, Scott Steiner, and Jerry Lawler cemented him as one of the most reliable men in the business during his heyday. He was 57.