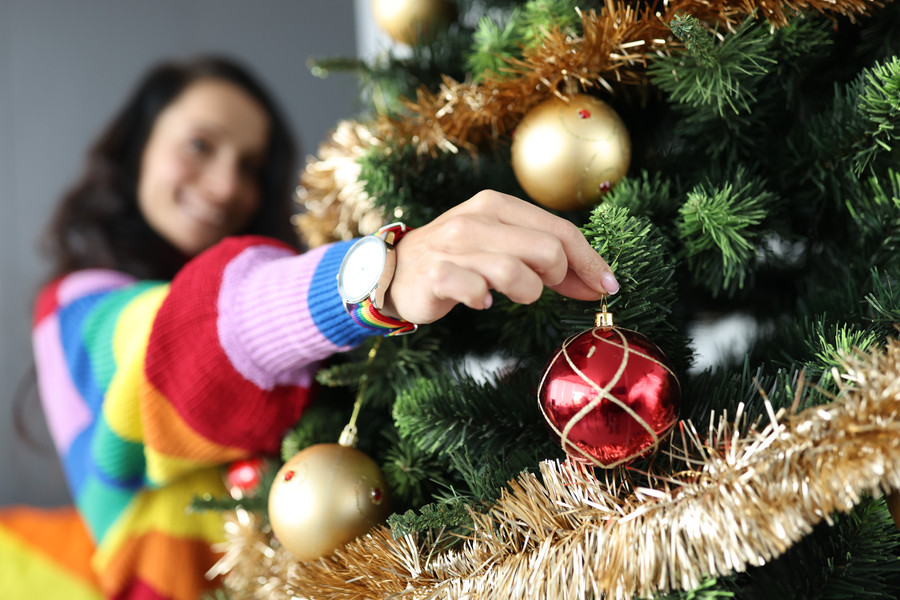 'Tis the season for a slew of "Best Holiday Movies" lists to spread across the internet. Whether these articles feature sleeper hits like the 1940's charmer "The Shop Around the Corner" or well-known classics like "A Christmas Story," there's one thing you can count on that all these movies have in common — they're heteronormative as hell.

Holiday movies (and, let's be honest, movies in general) still have a long way to go in terms of inclusivity and accurate representation. But thankfully, in more recent years, studios, streamers, and indie filmmakers have made an effort to change that.

And while there's most certainly still a long way to go in terms of visibility, there are now a host of films that deliver holiday cheer as well as characters that identify as gay, lesbian, bisexual, transgender, or queer. Here's a selection of representative and inclusive holiday movies that will deck your halls this winter.

Todd Haynes has been a figure in queer cinema since the independent film movement of the early '90s began with films such as "Poison," "Velvet Goldmine" and "Far from Heaven" to his name. But it was 2015's "Carol," starring Cate Blanchett and Rooney Mara as two women falling into a forbidden love affair, that may well prove to be his opus. Set during the Christmas season in 1952, this moving period piece might not inspire you to start caroling from door to door, but it does have the distinction of being named the best LGBT film of all time by the British Film Institute.

Sean Baker's "Tangerine" may have been filmed on an iPhone, but this indie darling took Sundance by storm for its hilarious and heart-wrenching portrayal of a transgender sex worker who discovers her boyfriend (and her pimp) is cheating. Set in Hollywood on Christmas Eve, "Tangerine" shattered casting conventions when Baker cast transgender performers Mya Taylor and Kitana Kiki Rodriguez, who up until that point, had no acting experience. Spoiler alert, they're amazing.

When it comes to depicting as many queer characters as possible in a film, the ensemble comedy "Friendsgiving" doesn't mess around. Written and directed by Big Gay Sketch Show's Nicol Paone, the film has nearly a dozen queer characters, as they each attend a hilariously dysfunctional Thanksgiving dinner. With a chaotic feast featuring former lovers, ex-friends, and a cameo by Wanda Sykes playing a fairy gay mother, "Friendsgiving" is not to be missed.

Last year's "Happiest Season" proved to be the breakthrough queer holiday film of the year. Kristen Stewart stars as Abby, who plans to propose to her girlfriend, Harper, over the Christmas holiday, only to discover she hasn't yet come out to her parents. While some viewers may have been understandably put off by some outdated cliches, others see "Happiest Season" as a pioneering queer film.

"Anna and the Apocalypse"

What holiday season would be complete without a screening of a British Christmas zombie movie? Enter "Anna and the Apocalypse." When the zombie apocalypse descends on the sleepy town of Little Haven, just as the Christmas celebration is about to commence, it's up to Anna and her ragtag group of friends to fight for survival. Oh, it's also a queer musical — what else could be on your wish list this year?

The Hallmark Channel is something of a holiday movie powerhouse, churning out a seemingly endless supply of festive films every year. And just last year, they debuted their first film with a leading gay couple: "The Christmas House." For those looking for wholesome fare sure to warm your heart, look no further. Jonathan Bennett ("Mean Girls") and Brad Harder star as a couple headed home for the holidays while waiting to learn if they've been approved to adopt their first child.

While 2007's "Holiday in Handcuffs" may not be remembered as a quintessential queer Christmas film, it's worth including in a holiday movie marathon if only for Kyle Howard's classic coming-out scene. Melissa Joan Hart stars as a dumped waitress determined to bring home the perfect boyfriend for the Christmas holidays, even if it means kidnapping an unsuspecting customer.

While LGBTQ holiday films are something of a recent phenomenon, "Make the Yuletide Gay" was a trailblazer for the genre dating back to 2009. They say that imitation is the sincerest form of flattery, and, in this case, the screenwriters of "Happiest Season" have a lot to owe "Make the Yuletide Gay." This cheesy, campy comedy follows Nathan joining his boyfriend Olaf home to his parent's house for the holidays only to find that (gasp!) Olaf hasn't come out to his parents yet.

When a snowstorm hits a small town on Christmas Eve, several sweet stories of love and friendship collide in the episodic film "Let it Snow." Based on a YA book that originally did not feature a queer love story, the filmmakers included one major shift by depicting a budding romance between two young queer women. We won't give it away, but like many classic Christmas films, a heartwarming ending might be in store.