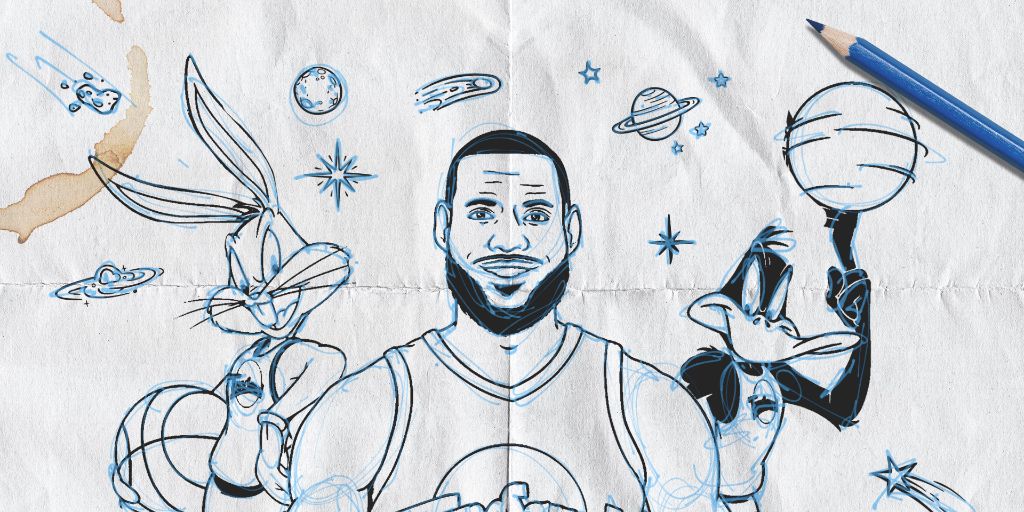 The Best NBA Actors of All Time

LeBron James is currently working on a sequel to the legendary basketball film Space Jam, and basketball fans around the world can't wait to see some of the NBA's biggest stars on screen alongside Looney Tunes characters and the Monstars.

With all the anticipation surrounding Space Jam 2, it's got us wondering: Who are the best NBA players ever to grace the silver screen?

Here's our definitive (unranked) list of the top seven NBA actors ever:

With Space Jam 2 fresh in our minds, it's only right that we kick off the list with the GOAT (greatest of all time) himself, LeBron James.

LeBron's comedic turn in Trainwreck was a welcome surprise to fans of Judd Apatow and basketball alike. Wowing audiences with a hilariously over-the-top, self-absorbed parody of himself,  Lebron proved that he can easily put his ego aside and make fun of himself.

Before we get off the Space Jam train, we need to talk about His Royal Airness, the King of Jam. Michael Jordan's starring role in Space Jam remains one of the most memorable acting roles in basketball history. Though his performance may not have won him any acting plaudits, Jordan's majestic presence (and hoop skills) were enough to make for a very entertaining film.

Okay, we'll say it: Ray Allen's performance in He Got Game is the single most impressive acting performance by any NBA player in the history of cinema, worthy of all the praise he's received from both movie critics and basketball fans. Though not a trained actor by any means, Allen delivered a performance that could fool anyone unfamiliar with his storied NBA career.

The fact that Allen was the leading star in a Spike Lee joint speaks for itself. The legendary director believed in Allen's talent enough to put him front and center in his film. On top of that, Allen was able to hold his own opposite Denzel Washington. Let that sink in for a moment...

Allen plays Jesus Shuttlesworth, the top high school basketball player in the country, inundated with countless scholarship offers from the best universities in the country. Washington plays Shuttlesworth's father, who, having spent most of Jesus's life in prison, is temporarily released for one month by the governor of New York in hopes that he can convince his son to sign with the governor's alma mater, Big State University.

Roger Ebert had high praise for Allen and the film as a whole, saying, "[He Got Game] never creates artificial drama with game sequences, even though Ray Allen, who plays for the Milwaukee Bucks, is that rarity, an athlete who can act. It's about the real stakes, which involve money more than final scores, and showmanship as much as athletics."

Rick Fox's acting career might not have a singular highlight as bright as Allen's starring role in He Got Game (although he played a bit part in the film), but Fox's lengthy filmography may be the most impressive out of any NBA actor.

Fox had roles in Blue Chips, Eddie, Resurrection, Holes, Meet the Browns, Dope, Oz, One Tree Hill, The Game, and many other films and TV shows.

Kareem Abdul-Jabbar moonlighting as a pilot in Airplane! is a hilarious sight to see. In the classic screwball comedy, the legendary center with the unstoppable hook shot plays a fictionalized version of himself who's attempting to lead a double life under the pseudonym "Roger Murdock."

Most memorable moment: a kid recognizes the seven-footer cramped in the cockpit of the plane. Kareem flatly denies he's a famous NBA player...until the kid mentions that his dad doesn't think much of Kareem's effort on the court.

"The hell I don't [play hard]!," Kareem bursts. "Listen kid, I've been hearing that crap ever since I was at UCLA! I'm out there busting my buns every night! Tell your old man to drag Walton and Lanier up and down the court for forty-eight minutes!"

Kareem's acting catalog goes deeper than just comedy films, though. His movie debut came eight years before the release of Airplane!, with the martial arts film The Game of Death, where he went toe to toe with another legend: Bruce Lee.

The most unfortunate thing to happen to Griffin's acting career was getting traded to the Detroit Pistons. When he was on the Los Angeles Clippers, he was at the epicenter of entertainment. Detroit's a great city, but there's not much of a film industry there.

Hopefully, Griffin will have more acting opportunities in the future. If he keeps working on his acting, there's a very good chance he will end up becoming the best NBA actor of all-time.

Kyrie Irving might not have the natural acting ability of Blake Griffin, but his ability to play one comedic character to perfection earns him a spot on this list. Uncle Drew has been a hit with NBA fans ever since Irving first donned a gray wig and put on pounds of makeup.

Uncle Drew started out as a Pepsi Max short film/commercial and immediately blew up on YouTube.

After the success of the initial commercial, Irving filmed additional short films as Uncle Drew. The Pepsi Max series of Uncle Drew short films became so popular that Irving developed an entire film based on the Uncle Drew character.

The film ended up pulling in $46.7 million at the office. Not bad for a Pepsi commercial character!

Kevin Garnett stars in the upcoming Safdie brothers film, Uncut Gems. The movie won't be released until December 13th, 2019, but it's already being touted by critics as one of the best movies of the year. Garnett plays a fictionalized version of himself who buys jewelry from the film's main character, Howard Ratner (played by Adam Sandler).

In an interview with the LA Times, Sandler said, “The more I was around Kevin as an actor, the more I got to know him as a person, I feel — I’m so happy that I know him. In the NBA and in [Uncut Gems], he just took it as serious as you could take something, and cared about his part in this movie.”

That's pretty high praise for Garnett. We can't wait to see him on the big screen next month.