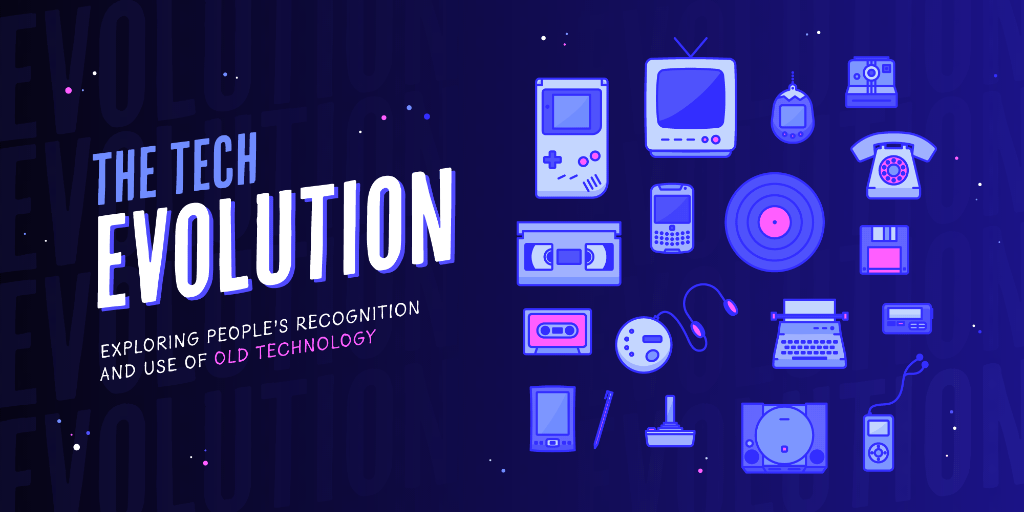 Think back to your youth. Was there a particular piece of technology that excited you most? Maybe the heaviness of the iPod Classic, or getting your hands on a Motown vinyl and then watching it spin in your record player. Were you the kid who chased the coolest camcorder, shot videos in your backyard, and played them on the VCR at family reunions? Those were the days.

However, if you’re wondering if VCR stands for virtual reality helmet, you’re wrong – but not alone. With technology evolving quickly over the years, some people may not even be able to pick a Game Boy out of a lineup. But who are they?

We were curious, too, so we showed people pictures of various technology throughout the decades and asked them to identify what they saw. We also asked participants if they’d used specific technology, and which pieces they missed the most. Keep reading to take a trip down memory lane. 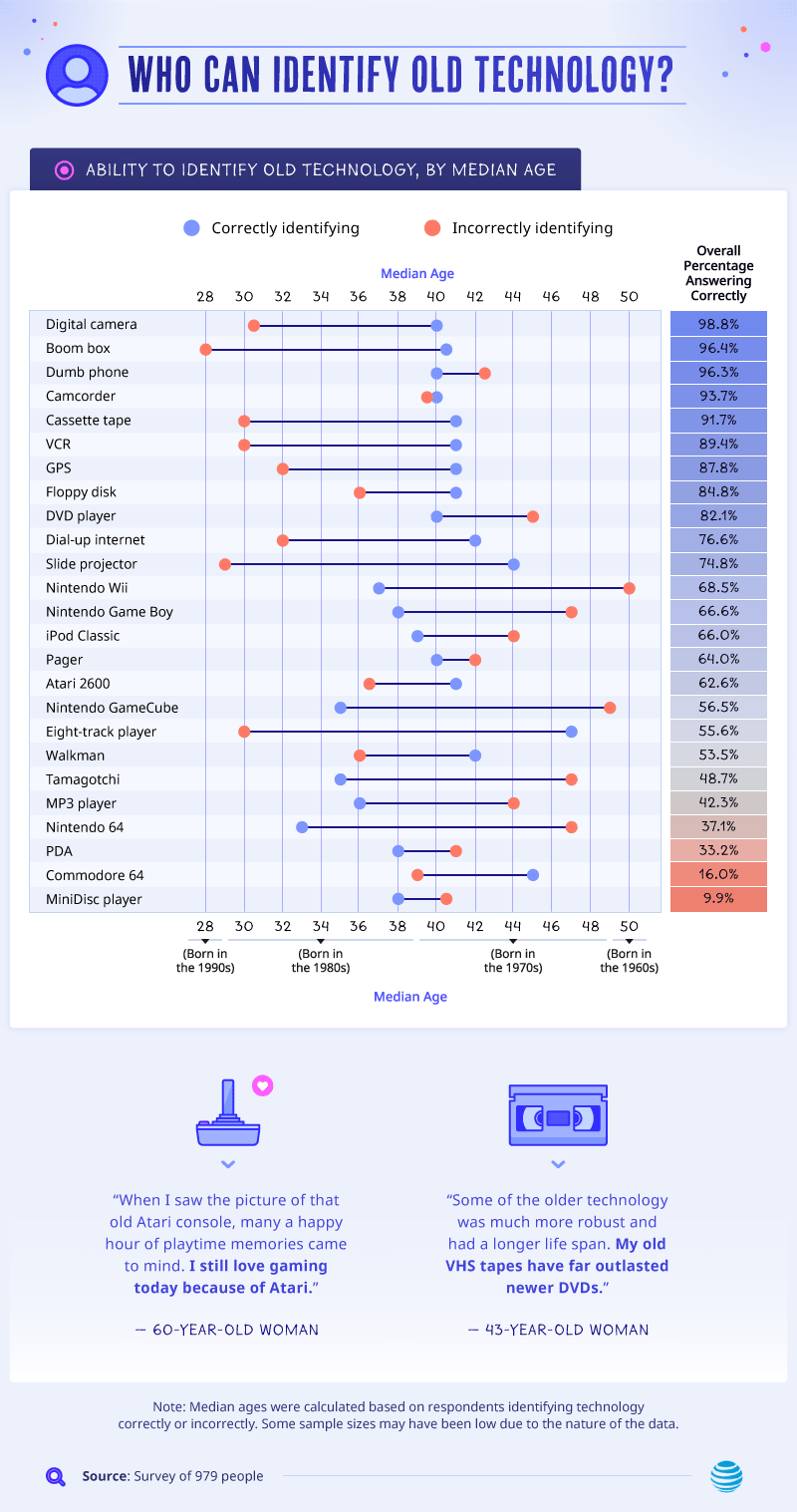 Television shows like “Stranger Things” and “Mixed-Ish” have been bringing us back in time as of late. And the nostalgia is real: Walkmans on hips, cassette players, and Nintendo matches abound on these shows.

When we asked participants in our survey to identify a list of technology throughout the decades, trends in which age groups remembered which devices emerged. A majority of people correctly identified a digital camera, boombox, dumb phone, camcorder, and cassette tape. Although invented in 1975, digital cameras became popular in the 1990s, becoming a staple in many households, which might explain why 98.8% of people correctly identified one. 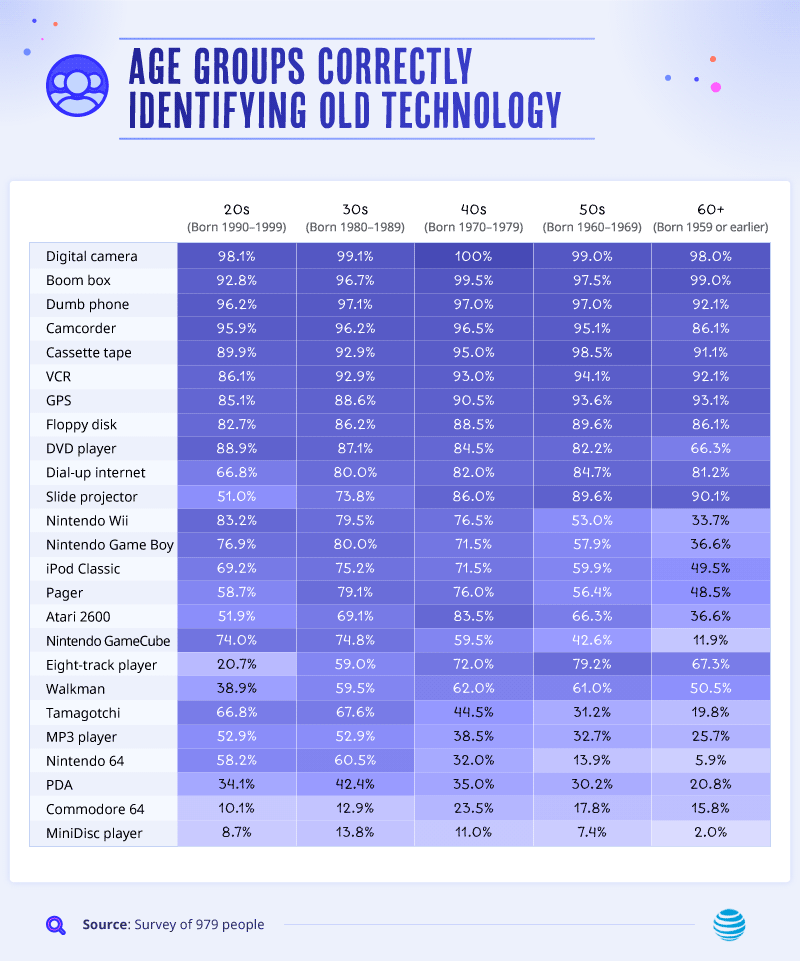 Funai, the last company to make videocassette recorders, better known as VCRs, stopped production in 2016. While this might be inconvenient for older Americans who may have to digitize their home videos, VCRs going extinct may mean younger generations will never have to experience the sorrow of accidentally taping over grandma’s 80th birthday. Still, 86% of 20-somethings in our survey correctly identified a VCR, and 89% labeled a DVD player accurately. However, people age 30 and older had a better recollection of a VCR than they did a DVD player.

Was one item correctly identified 100% of the time? Yes. Forty-somethings were experts about the digital camera, but only 11% could say the same for a MiniDisc player. And while the MP3 player didn’t score as well with older generations, more than half of those in their 20s and 30s recognized the device, probably because the digital audio player is still in circulation.

Additionally, while those aged 50 and older did an unfavorable job identifying the Wii, Nintendo 64, and Tamagotchi, 58% of 50-somethings and nearly 37% of 60-somethings correctly identified the Game Boy, and about half of those age 60 and older recognized the iPod Classic.

But Have You Used It?

It’s one thing to pick a retro piece of technology out of a lineup; it’s another to have operated one. As part of our survey, we asked people aged 20 and older which technology they’d gotten their hands on.

More than half of 20-somethings had used vinyl records (51.4%), a typewriter (53.8%), and a film camera (69.2%). Millennials may have a reputation for killing everything from golf to department stores, but they’re reviving the typewriter business (along with Tom Hanks). Most 30-somethings are considered millennials, and 79.5% had also used a typewriter.

However, every 60-something surveyed had operated a typewriter, and more than 9 in 10 had used just about everything on our list except for ham radio (19.8%). They weren’t alone: Amateur radio was the least popular across all age groups. While the transistor radio didn’t do well among people under 40, more than 4 in 5 of those aged 50 and older had used one.

The Light Phone is reminiscent of the dumb phone, preventing us from being sucked into a social media black hole. But are there other technology people would like to see revived?

Nearly 2 in 5 respondents said they want vinyl records to make a comeback, and they’re on their way: Vinyl and cassette sales doubled in 2018. Following vinyl records were Polaroid (21%) and film (14.8%) cameras. Phone booths also made the top 10. For the 11.1% of participants who said they are interested in this specific technology, New York City has a fifth of the 100,000 phone booths remaining in the U.S.

Stuck in the Past

And those phone booths? A majority (32.4%) of the people who said they want phone booths to come back were people in their 50s.

Are you ready to test your knowledge of old technology? Take our short quiz to put your memory to the test. Can you recognize old devices? Do you know when they made their debut? What about what they’re actually used for?

Reminiscing on the past can be nice. In some cases, it may even help connect younger and older generations. Maybe that’s why many popular TV series take us back in time.

Whether you want to experience a sci-fi series set in a fictional 1980s town or enjoy Humphrey Bogart classics (in the event someone taped over your old VHS), DIRECTV is here to help. Our high-speed internet connections make streaming effortless, and our packages cover all your favorite channels. Visit DIRECTV to choose the package that best suits you.

We surveyed 979 people about various pieces of old technology to see if they were able to recognize them. Respondents were 51.8% women and 48.2% men. The average age of respondents was 41.2, with a standard deviation of 14.

Respondents were shown images of various pieces of old technology and asked to write their best guess as to what each was. Responses were manually grouped and categorized as correct or incorrect. Allowances were made for incorrect spelling as long as it was clear the respondent knew the device’s name. For particular devices, we required that respondents be as specific as possible to be considered correct. For example, when shown a picture of a Nintendo Game Boy, it was not considered correct if respondents wrote in something like “handheld gaming console.”

From the outset of this survey, we endeavored to get a sample of respondents of a variety of ages. Sample sizes for the age groups are:

Due to the smaller sample size of people aged 19 and younger, that group was excluded from the parts of this project breaking down metrics by age. However, these respondents were included in our broad look at the data.

Respondents were asked if they’d ever used particular pieces of old technology. They were instructed to select all options that applied to them. Therefore, the percentages for these data may not equal 100.

When reporting which old technology they would have liked to make a comeback, respondents were able to select up to three of the options listed. Therefore, percentages for these data may not equal 100.

Technology has come a long way, and it feels like it evolves faster than ever these days. If someone you know would enjoy this project, you are free to share for any non-commercial reuse. We simply ask that you link back here so that readers can see the entire survey and review the methodology. This also gives our hardworking contributors credit for their efforts.