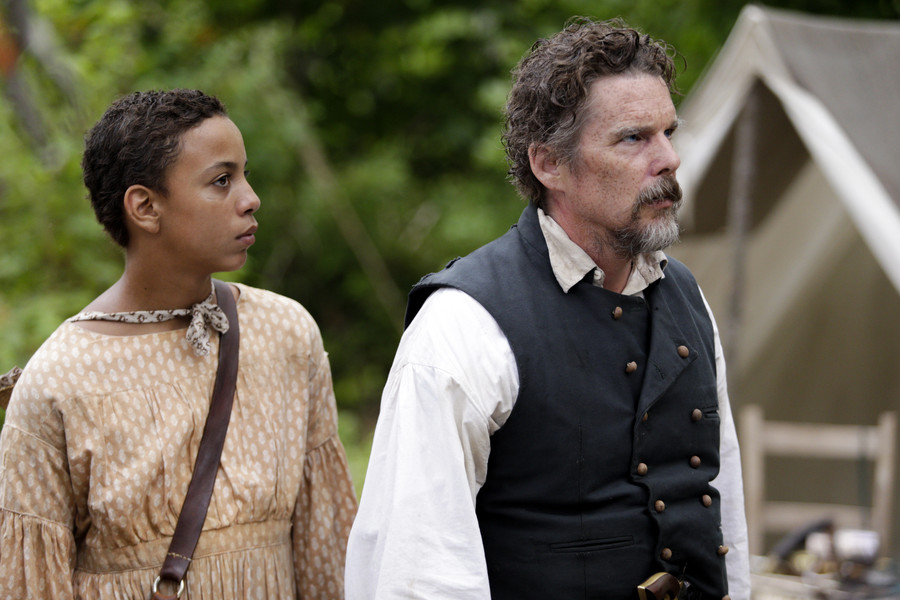 "The Good Lord Bird" is an upcoming Showtime miniseries based on the book of the same name by James McBride. McBride, who also serves as an executive producer on the show, wrote the book from the point of view of a 14-year-old enslaved boy named Henry Shackleford (Joshua Caleb Johnson), who encounters abolitionist John Brown (Ethan Hawke) in a bar. They begin working together, encountering Frederick Douglass (Daveed Diggs), Harriet Tubman, and taking part in Brown's famous raid on Harpers Ferry.

At the 2020 Television Critics Association winter press tour, McBride told reporters that he has always seen John Brown's journey as "this funny story" full of "idiosyncrasies of African-American life," which can be "very difficult to deal with even for African-Americans," especially when it involves a topic like the idea of the "white savior," i.e. a white person helping a non-white person in a self-serving manner. But what McBride and Hawke, who is also an executive producer, want to do with "The Good Lord Bird" is tell a new kind of white savior story.

"It's a story of caricature," he continued. "Frederick Douglass is treated as an element of caricature. ... I want to see something that informs me, that's funny, that gives me and gives the viewers a chance to say 'Oh, I made a mistake,' 'Oh, this is funny,' and 'Yes, it's true as well.'"

Hawke feels much the same way about the project, telling reports what John Brown himself would say about the idea of a white savior: "'Black folks don't need saving. It's white people that do.' That's the spiritual work of his life."

Hawke also said that McBride's book was a revelation when it came out in 2013 because it was making jokes about slavery, an issue whose repercussions are still very much present and prevalent in today's society.

"I remember, when the book first came out, it threw people. It was, like, 'Wait. You can make jokes about this? You can make this funny, this story that's touching the great national wound?' Yes, you can. And when you do that, when you do it with love and wit and silliness and intelligence and don't ignore the pain, you can do something original," said Hawke.

In telling the story of Brown and the fictional boy, named Henry, the miniseries aims to make viewers take a look at the issues that are deeply rooted in American history and how they still resonate today.

"Here we are in 2020, and all of the things that people are bristling up against each other about are not new. And [McBride] found a way to make us laugh and see our common humanity and see that we are all participating in something much bigger than our individuality and that... storytelling can be powerfully unifying when we start to realize that all of our experiences aren't as unique as we think."

Hawke also said that what fascinates him about Brown is that he was somebody who was "clearly on the right side of history" and who "went to extreme measures for his beliefs," something that you can find today all over the world — and those people challenge the status quo in the same way Brown did.

"If you really study this character, he asks a lot of you philosophically because he challenges why so many of us accept the unacceptable," said Hawke.

McBride added, "[Brown] managed to roust a whole nation to really push its conscience to the forefront and deal with the moral issue of what slavery represented, and that really says an enormous amount about this person. And we are the first major ... players to take this to a wide audience so that Americans can actually learn how to discuss our history in ways where we are not slapping each other in the face and punching each other out. We have to find ways to talk about race where we have, like, real regal discourse as opposed to just yelling and shouting, and this is the means. This is the road in. This guy showed us how to do it."

And in tackling the material, Hawke said he didn't realize how much he didn't know about slavery and the time period — he thinks there's a lot that most people don't know.

McBride added, "John Brown is a real hero to me and to many Black people who are no longer alive, and I'm so glad that we brought this story to people. Yes, we do take a couple of hits at Frederick Douglass. We have fun with it. I'll take it. That's mine. That's my work. But the fact is John Brown gave his life and two of his sons' lives to the cause of freedom for Black people and he started the Civil War. And they buried this man's story for a long time because nobody could figure out how to tell it without losing money or losing their career or getting themself deep‑sixed some kind of way. We managed to do it."