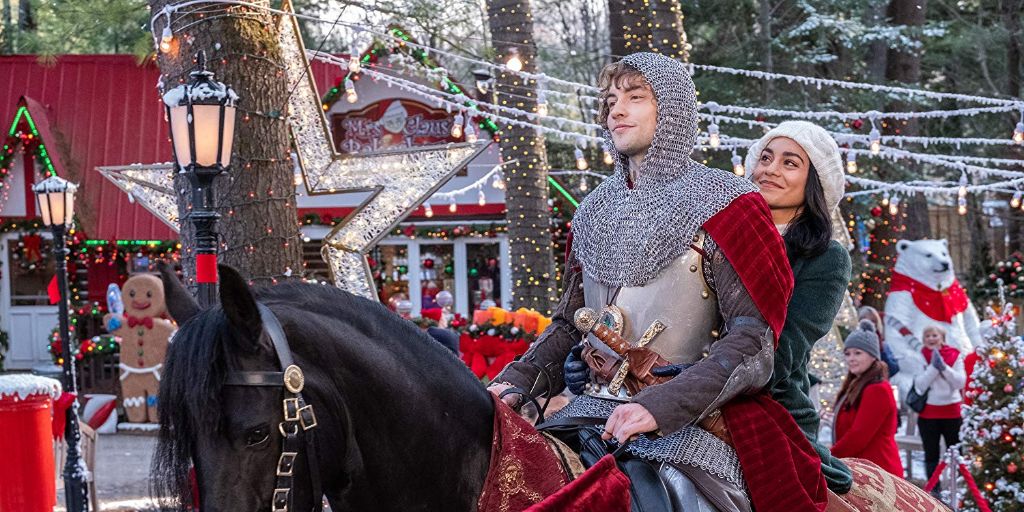 The Knight Before Christmas Makes No Sense and, Frankly, I Love That

Absurd Christmas movies are proliferating across the media landscape like a whimsical but terrifyingly invasive species of flower. There’s no better example of the sheer unhinged delight this genre can afford than The Knight Before Christmas.

The premise is pretty simple, really: A 14th century knight named Cole is zapped to 2019 Ohio so that he can fulfill the special quest that will make him a “true” knight, which in this case is not being roped into yet another ill-advised edition of the Crusades but rather something involving his heart. Leaving his trusty steed galloping back to the castle, confused, he lands smack in the middle of a town Christmas festival, where the attendees include a high school teacher named Brooke who’s been burned so badly by her cheating ex that she feels comfortable telling one of her students that fairytales about love are bogus. (Fun to imagine that student’s conversation with her mom when she got home!) Brooke hits Cole with her car and, assuming he has some sort of amnesia as a result, volunteers to take him in. Obviously, they fall in love in the week that leads up to Christmas, bonding over food, the blizzard rescue of Brooke’s niece, and also binge-watching Netflix.

This setup might seem ludicrous and completely off-the-wall, except for readers of old-school romance novels, who will be very familiar with the time-traveling medieval romance trend of the early 1990s, which kicked off with Jude Deveraux’s Knight in Shining Armor. (It’s the publishing context that originally produced Outlander.) It’s a well-established trope, but it doesn’t really make sense for a number of reasons even if you grant the premise of magic. For one thing, somebody from 14th century England wouldn’t speak fancy but basically modern English. He’d speak Middle English, and he wouldn’t be able to read a diner menu, either. The movie seems to have cobbled together its understanding of what knights actually were and did from the back of a Melissa and Doug dress-up set and maybe a quick peek at whatever automatically populates on the Google search page for “knights.” Whatever! It’s fine. We’re not in an episode of the BBC’s In Our Time, here.

Combining the time-traveling medieval romance with the Christmas romance-movie format pioneered by basic cable, though, is an innovation, one that allows the writers to get away with new levels of absurdity and extremely high expectations for your ability to suspend disbelief. Because she feels guilty for lightly bumping this man with her car — and maybe causing him some temporary amnesia — Brooke invites him to stay in her guest house (she’s inherited her parents’ apparently enormous Ohio home, and I spent a substantial chunk of the movie fantasizing about her more-than-ample closet space). This is a man wandering around in full medieval costume, claiming he’s from the 14th century, carrying a FUNCTIONAL sword that the hospital simply hands back to him as he leaves the emergency room, a cop standing right there. Even accounting for the Christmas-movie magic of not being afraid of ax murderers — when her sister asks, “What if he’s dangerous?” Brooke replies, “I’ve been teaching school long enough to know a good apple when I see one. Trust me, he’s harmless!” — surely this town has some sort of social programs?

Brooke proceeds to loan the knight her car, on the assurance that he has tamed many beasts before; even if she doesn’t think that he’s a time-slipped 14th century knight, and even if she thinks he’s a great guy, this man is a stranger. He can be a great guy and a terrible driver! How would he even figure out how to put the car in gear? Brooke is also entertaining the possibility that Cole might be a knight from 14th century England literally halfway through the movie, just days into their acquaintance. She is, by the way, a science teacher. But again: It’s fine! Get in the clown car, we’re going to the North Pole!

The production values, meanwhile, are beyond what you might expect from even the most marquee offerings of Hallmark. Nobody is wearing an obvious wig. The opening sequences, filmed in Ireland — as opposed to Romania or, say, a New Jersey Medieval Times — feature at least seven horses, numerous knights clad in chain mail, and a crowd of extras wearing nice velvet instead of just grubby mud-peasant getups, and also a falcon. Granted, you can probably get a great deal on anything fake-medieval in Ireland right now, thanks to the end of Game of Thrones, but still! The effect is paradoxically to make the whole movie even more ridiculous because they actually spent some money on this thing and yet they are absolutely not taking it seriously whatsoever. But they’re also not treating it as such a joke that you’re offended at the laziness. It’s weird and it’s shaggy and it’s goofy and somehow, inexplicably, it’s perfect!

I’m not sure how Vanessa Hudgens got the job as Queen of Netflix Christmas — the last thing I saw her in was Spring Breakers — and yet here she is, somehow serenely untroubled by the absolute ridiculousness of her surroundings. Josh Whitehouse, who plays Cole, is a floppy big-shouldered kind of cute without being the very specific sort of cookie-cutter catalog-model handsome guy you see in a lot of these movies, and his comedic timing is good. He constantly refers to the woman who time-warped him into 2019 as “old crone,” not in a rude way, exactly, just in the way you might say, “Excuse me, ma’am?” when trying to get the attention of someone who’d dropped her MetroCard. At one point, he stands in the grocery store behind Brooke and begins sampling the dinner rolls, which he finds unacceptable. It’s not exactly high-level humor. Really, it’s more like something you’d watch a teenager do on TikTok. And you know what? It’s funny!

That’s the thing: This movie is goofy and knows it. At one point, the town Santa gives Cole a little pep talk about faith and Christmas, which our hero takes at face value. As Cole walks off, Santa mutters to himself, “Damn, I’m good,” which I choose to read as a self-aware joke about all the treacly real Santas from Hallmark movies, despite the fact that the director, Monika Mitchell, has made multiple movies for the channel. He also suggests at one point that he might open a bakery, which also feels like some light clowning with the conventions of the genre. Yes, this movie does eventually pivot to the entire town's raising money to do Christmas for a struggling family, which feels like a brief detour into Dr. Quinn, Medicine Woman. But it’s also dramatically hornier than anything that’s ever been on Hallmark. This is in keeping with the tradition of the old-school romance trope, which grew out of the old-school medieval romance, which was absolutely part of the bodice-buster canon; these were the types of books wherein someone could at any point begin having sex on some sort of fur pelt.) At one point, they have a conversation with Brooke’s neighbor as Cole stands there in his knightly undershirt, which is so translucent you can get a little sense of nipple and the clear line of his flank.

Let me sum this movie up for you: At one point, they turn on the TV and another Netflix Christmas movie (specifically, the one featuring Rob Lowe and Kristin Davis in Africa at an elephant sanctuary, for some completely mystifying reason) is playing. Also, eventually he goes back to the 14th century, says goodbye to his brother, and returns with his horse, basically just so the couple can trot off into the Christmasy sunset. None of it makes any sense, and it’s fine. In fact, I love it!

This article was written by Kelly Faircloth on The Muse and shared by Kelly Faircloth to Jezebel from Jezebel and was legally licensed through the NewsCred publisher network. Please direct all licensing questions to legal@newscred.com.