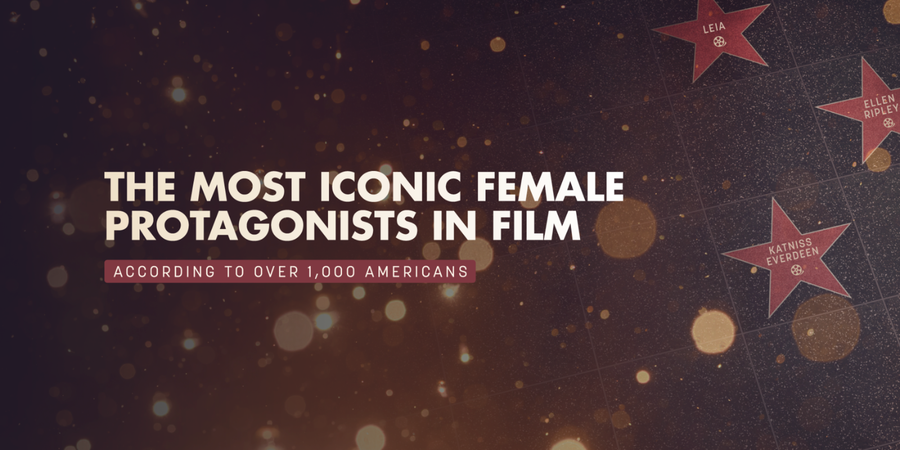 The Most Iconic Female Protagonists in Film

Of course, Daisy Ridley's path to the title role in "The Last Jedi" and Gal Gadot's instantly iconic portrayal of the titular Amazonian princess in "Wonder Woman" didn't happen overnight. While movies like "Alien" may have broken the mold on far-off films, many of the most highly regarded science fiction movies of all time have featured men at the helm.

So what has the film industry looked like for female leads and the powerful characters they've portrayed over the years? Taking a look at the buildup to 2017 and beyond, we surveyed over 1,000 people about the most iconic female characters and how men and women perceive these roles differently. Read on for an exciting trip down memory lane as we take a closer look at some of the greatest heroines ever to grace the silver screen.

When asked to rank the most iconic female characters of all time, the most popular pick was a legendary character from 1939: Dorothy Gale from "The Wizard of Oz." More than Judy Garland's breakout performance, this Technicolor musical is often cited as one of the most important and fundamental movies to revolutionize the film industry. From her blue and light pink gingham dress to those famous glittering ruby red heels, Dorothy reigns as the most iconic female character ever in a science fiction or fantasy film.

Other more recent female characters also earned the same distinction. Leia Organa, played by the late and beloved Carrie Fisher, and Ellen Ripley, played by Sigourney Weaver, in "Alien" helped round out the top three. Even more modern characters like Katniss Everdeen, the teenage heroine from the "Hunger Games" played by Jennifer Lawrence, and Gal Gadot's Diana Prince in "Wonder Woman" ranked among the all-time most iconic female portrayals in film.

Some of these characters may have even amassed global appeal. "The Hunger Games: Catching Fire" earned $864 million globally, making it the third highest-grossing film with a female lead ever.

If the Bechdel Test tells us anything, it's that even after so many notable achievements in film for female characters, female representation in film still has a ways to go before comparing to the roles led by men.

To imagine what the future of cinema might look like with a more diverse cast, we asked people to imagine some of their favorite films with women in roles that have historically been held by men. James Bond movies ranked as the ripest for a gender-bending makeover. Women in James Bond films have often been met with harsh criticism, and while the debate continues to rage on about how to evolve Mr. (or Ms.) Bond for a more modern audience, producers may consider looking even further outside the box.

The "Indiana Jones" and "Mission: Impossible" series were also popular films that movie fans wanted to see a woman take up the mantle for, and some movies were even reimagined with an entirely female cast. Men were interested in seeing "Fight Club" recast with women at the helm, while most women preferred a comedy like "The Hangover."

A Cut Above the Rest

So what makes these female characters so memorable, even decades after their films have come and gone? Katniss Everdeen's bravery and strength as a victor in "The Hunger Games" made fans most want to be like her. Her self-sufficiency in the face of adversity, her passion for family and love, and her humble attitude have helped her rank among the most admirable and iconic female characters ever.

Hermione Granger from the "Harry Potter" franchise was a character who viewers considered the smartest female character and most wanted to befriend, while Mulan was voted the best female character for breaking gender norms. Set to become a live-action film in 2020, "Mulan" also challenges sexuality.

Diana Prince from "Wonder Woman" was widely regarded for her strength (something actress Gal Gadot helped channel in her portrayal), and Erin Brockovich –based on a real-life story and played by Julia Roberts in the 2000 film – ranked as the best role model for adults.

Female characters don't always exclusively appeal to female audiences. Both men and women had opinions on which iconic heroines (and films) ranked as the most memorable.

For men, Sigourney Weaver's Ellen Ripley in "Alien" was the most iconic leading lady. Premiering in 1979, the choice to frame this sci-fi space adventure around a remarkably human female character was a groundbreaking decision by director Ridley Scott at the time. Despite her courage and strength in the face of insurmountable odds, the decision to keep Ellen Ripley firmly grounded as a relatable and human character helped catapult her status as a film legend.

Women had a different perspective, though. While men admired characters like Ellen Ripley and Lara Croft (the female character they'd most like to be themselves), women picked Leia Organa of "Star Wars" fame as the most iconic female lead. It could be Carrie Fisher's legacy that helped cement the way women see and relate to the role she pioneered, though. Considered by many to have been a powerful, feminist force, Fisher was known for being critical of the sometimes sexist portrayal of her character in early films.

In 1977, the world met Leia Organa (and her hairdo) when "Star Wars: Episode IV - A New Hope" landed in theaters. Despite being over 40 years old, millennial women ranked the princess as the most iconic female character in film. As a popular choice for protest signs at women's marches and rallies these days, young viewers have proven Princess Leia remains a timeless piece of cinematic history.

While millennials also favored characters like Hermione Granger from the "Harry Potter" films and Diana Prince from "Wonder Woman," older generations had a somewhat different take. Female Gen Xers ranked Katniss Everdeen from "The Hunger Games" as the most iconic heroine in film, and baby boomers instead voted for Scarlett O'Hara from "Gone With the Wind."

"Gone With the Wind" is known for presenting a modern, independent woman, despite also being potentially problematic in some other ways. While Scarlett O'Hara may have been overwhelmingly favored by older women, newer characters left a similar mark. Nearly 1 in 10 female baby boomers had a similar affection for Katniss Everdeen, and almost 5 percent voted for Belle from "Beauty and the Beast."

From Real Life to the Big Screen

From intergalactic space fights to wizarding schools and distant dystopian futures, the female characters both men and women considered the most unforgettable were often entirely fictional (even if they were sometimes loosely based on real people).

Still, protagonists in films based on women from history have the power to leave a similarly profound mark on audiences. Nearly 8 percent of women chose protagonists rooted in reality over fictitious characters.

Baby boomers were more likely to root for Queen Elizabeth I (played by Cate Blanchett in "Elizabeth"), while Erin Brockovich left a lasting impression on female Gen Xers and millennials. The role of Queen Elizabeth I will be reprised in late 2018 by Margot Robbie in "Mary Queen of Scots," and critics are already buzzing with thoughts of Oscar season for both Robbie and Saoirse Ronan as the ill-fated Mary Stuart.

Just because female film characters are considered iconic by generations of viewers, those characters may not always receive as much screen time as their performances deserve. The Bechdel Test monitors how many named female characters appear in a film, how often those characters speak to one another, and whether they engage in at least one conversation that isn't about a man. While 85 percent of the movies discussed here pass the Bechdel Test, several notable films do not.

In "Star Wars: Episode IV - A New Hope" Carrie Fisher may have brought the eternally iconic Leia Organa to life, but her representation on screen failed to pass the Bechdel Test. And despite being the title character (and a favorite among male audiences), Lara Croft in "Tomb Raider" met the same fate. Even Scarlett Johansson's Black Widow in Marvel's 2010 "The Avengers" failed the Bechdel Test requirements, a fault that producers hope to remedy by giving the character her own female-directed solo film.

The Face of Film

Whether you're interested in space, biopics, or superhero films, women are starting to take a more dominant role in everything from leading roles to directorial and cinematography credits.

And while they may not have the same amount of screen time as some of their male counterparts, audiences of every age have thoughts on some of the most iconic roles women have led over the years. Characters like Princess Leia, Dorothy Gale, and Katniss Everdeen didn't just break the mold or revolutionize the industry – they've left a lasting mark on the men – and women – who've watched their stories unfold.

Want to see more of these groundbreaking, earth-shattering leading ladies for yourself? DIRECTV has all their films and more waiting for you to watch online, wherever you are. From live TV streaming to new movie releases and timeless classics, there's no end to the heroic, hilarious, and heartwarming stories you can explore with DIRECTV. See for yourself at DIRECTV.com.

A preliminary supplementary survey was run to ascertain the list of the most well-known and iconic female protagonists. A list of the female protagonists who participants could select from can be found below. We also gave them a write-in option if an iconic character was not listed. These responses were later categorized.

We then collected responses from 1,003 Americans about iconic female protagonists from Amazon's Mechanical Turk. Fifty-eight percent of participants were men, and 42 percent were women. Participants ranged in age from 18 to 77 with a mean of 36 and a standard deviation of 12.

The data we are presenting rely on self-reporting. There are many issues with self-reported data. These issues include but are not limited to the following: selective memory, telescoping, attribution, and exaggeration. No statistical testing was performed, so the claims listed above are based on means alone. As such, this content is purely exploratory, and future research should approach this topic more rigorously.

Feeling inspired to rewatch some of these iconic female film characters? We'd love to see the results of this survey shared with your audience for any noncommercial use. Just make sure to include a link back to this page so that our contributors also get credit for their work.