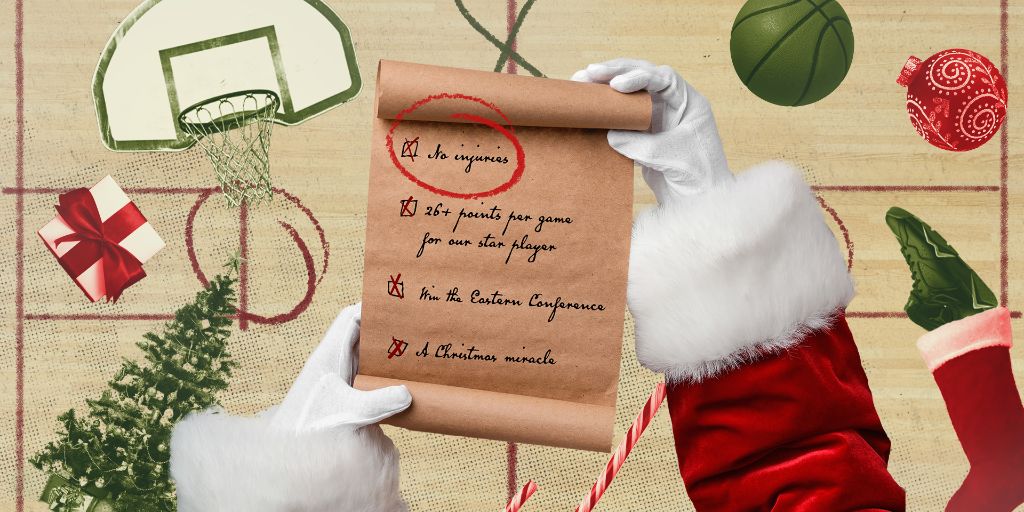 For decades, the holiday season has held extra special meaning for basketball fans, thanks to the annual tradition of Christmas Day games. This year will be no different: five games will be on TV, including the Los Angeles Lakers vs. Los Angeles Clippers (ABC, 8 p.m. EST) and two big Eastern Conference showdowns, first between the Boston Celtics and champs Toronto Raptors (ESPN, Noon EST) in Toronto, then with the Milwaukee Bucks visiting the Philadelphia 76ers (ABC, 2:30 p.m. EST).

No matter who’s playing, it’s Christmas for everybody in the NBA. Teams across the league are now reflecting on 2019, evaluating where they stand, and making their wish lists for 2020. Santa, take note: we have some gift ideas for several teams, including the ones playing on Christmas Day.

Here’s what we want to see under the NBA tree this year.

A Reset Button For The Utah Jazz and Portland Trail Blazers

If you had to guess two teams in the NBA this season that might be wishing to start their season over again, the Utah Jazz and the Portland Trail Blazers would be safe picks. Once, both teams were seen as major contenders in the Western Conference. Now, both are scuffling to stay in the playoff picture, albeit for different reasons.

Portland has been the victim of bad health. Jusuf Nurkic is still slowly healing after a brutal broken leg ended last season. Forward Zach Collins is out until at least March with a shoulder injury. Starting small forward Rodney Hood suffered a torn Achilles earlier this month. Carmelo Anthony’s NBA debut has been the lone salve during a rough Blazers season.

In Utah, the struggles are less tangible but more perplexing. The Jazz traded several key players from last year’s team to Memphis in exchange for the perennially underrated Mike Conley. But ever since the Jazz unwrapped Conley, their prize has struggled mightily to find his footing. Conley is averaging his lowest points per game since 2011, shooting below 38 percent from the field for the first time in his career. And he’s dealing with hamstring trouble. Utah’s other big-money acquisition, Bojan Bogdanovic, has been good, but he hasn’t singlehandedly saved the team (yet).

For these two Western Conference would-be contenders, it’s hard to imagine a better gift than a fresh start in 2020, free of bad health, bad breaks, and plain bad luck.

A Quick Vacation For Nikola Jokic

Nikola Jokic was one of the best players in the NBA last season. He pushed the Denver Nuggets to the No. 2 seed in the Western Conference, leading their best playoff run since Carmelo Anthony left in 2011. But ever since the FIBA World Cup in China where his No. 1-ranked Serbia team failed to medal, he has looked a little bit slower than usual. Jokic’s offensive numbers, the stats that arguably made him the best center in the league last year, are down across the board.

At 14-7, the Nuggets are still a good team. And luckily for them, their Christmas Day opponents, the New Orleans Pelicans, have been without Zion Williamson all season. But an easy game on the schedule might not be a big enough gift for Jokic this year.

No, what our guy needs is a little bit of a vacation. A tropical island, a spa, a sensory deprivation chamber—whatever helps him rest up. The Nuggets might need him to stay at the top of the Western Conference, but Jokic needs a bit of an energy jolt.

If Santa needs inspiration, he can look to the two-week leave LeBron James took to get his back right during his first season with the Cavaliers. Jokic doesn’t have any injuries that we know of, but perhaps what he needs to rest is his mind. Preferably without having to miss any games. We’re allowed to ask for miracles—it’s Christmas, after all.

Respect For The Eastern Conference

For the past two decades, the Western Conference has dominated the league. Even though we can’t definitely say the tide is turning for good, we should give the East some respect for finally evening out an imbalance this year.

The defending NBA champions are from the East this year. At least through Christmas, the Eastern Conference has a legitimate claim to being a better conference than the West so far this season.

The East currently has one more above-.500 team than the West does, as well as six teams with 16 or more wins compared to just three in the West. For decades, people derided the East as the NBA’s version of AAA, but they’ve followed up a title season with an even better regular season.

The East deserves our respect for Christmas. We don’t have to wait for Santa to give it to them.

Catch all the Christmas Day NBA games with DIRECTV.