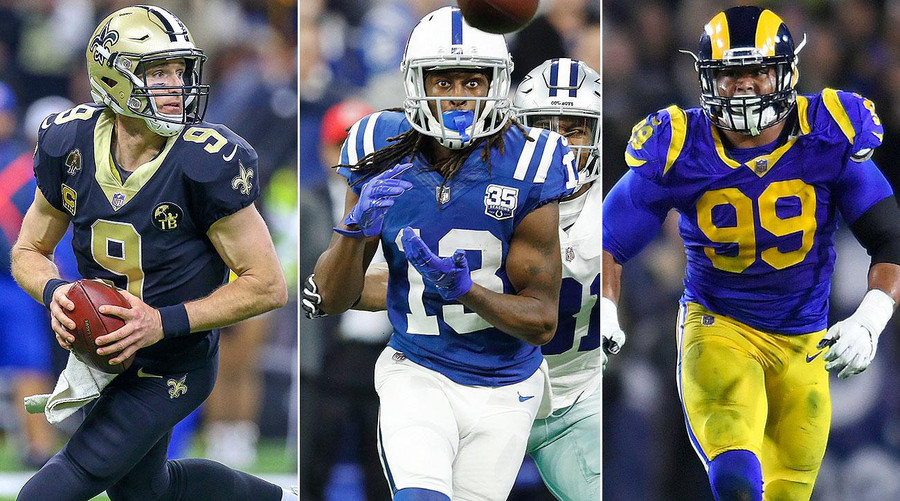 What if you built a team from a pool of the NFL’s smallest players? What would that roster look like, and—just as importantly—how would a coach scheme with it?

We decided to find out, constructing a team of players who are notably lighter and shorter than the average height and weight of players at his position. This is not an All-Star team of small guys, per se, but rather the best all-around team one can construct—this exercise also factored how players fit together and into a scheme. We’re building this team the way a smart NFL GM would.

We can go ’round and ’round debating whether Brees or Wilson is the best undersized quarterback—it’s a matter of philosophical preference. Brees brings scientific, highly structured quarterbacking to a roster, while Wilson is an artful, sandlot-style quarterback. I believe in structured quarterbacking, not just because it’s inherently more consistent than out-of-structure playmaking, but also because it’s easier to scheme around. If this offense is comprised of tiny players and led by a QB smaller than 6' 2" and 222 pounds, the coach must craft specific designs that capitalize on speed and quickness. Brees will execute those designs to a T, and Wilson might or might not. It’s worth noting that if a design fails, Wilson offers a life raft with his running ability that Brees does not. Wilson is also the better deep ball thrower, which can take on added significance in an offense built on speed. Still, most speed-based offenses stress safeties deep in order to create windows at the intermediate levels. No one is better on those designs than Brees.

Undersized backfield receiving weapons are not hard to find; undersized first-and second-down ballcarriers ARE. The lightning-quick Lindsay would be my starting place, with the understanding that he’d have to rotate with Dion Lewis, who has actually been more of a base tailback than third down back the last several years. We know a tandem of White and Lewis works because it did in New England.

It’s hard to leave DeSean Jackson off this roster, but Hilton and Cooks are just as fast and have more left in the tank. Last year Lockett had one of the most proficient downfield receiving seasons in history, and he can probably work the deep-intermediate levels in the right system. With pure vertical weapons like Hilton and Cooks, the third and fourth receivers must be viable underneath. Crowder, who is shifty on shallow routes, gets the nod, with the understanding that some of his snaps might go to the less talented, but more schematically expansive, Amendola, who can play inside or outside.

Not surprising that both are pass-catching tight ends—though to their credit, they compete when they’re asked to block (especially Reed). Because this roster is small, defenses will probably play nickel and dime packages against the team, which partly negates the benefit of having a flex tight end. Still, these guys, even smaller than the average 6' 4", 254-pound tight end, can beat most cornerbacks.

I’d love to put 6' 4", 310-pound Packers stud David Bakhtiari here, but he is a little too close to the average size of an offensive tackle (6' 5", 315 pounds). Boles struggles with power rushers, especially when their initial contact comes near the top of his pass-set drop. Brees, who is great at climbing the pocket, can negate this, but it’s a concern worth monitoring.

This brings us to the discovery with offensive linemen: there really aren’t small ones, especially inside. The average guard weighs 314 pounds; only nine weigh below 305. Daniels gets the nod on talent and potential, beating out Dallas’s Connor Williams, who struggled mightily last season.

Kelce might be the NFL’s best center period. His football IQ and his agility are off the charts. He’ll bring a lot of dimension to the screen game, which is critical when playing with undersized backs and receivers.

Yanda might be in decline, but he’s declining from one of the highest right guard perches in football. He is a savvy pass blocker and excellent all-around run-blocker, including when on the move.

Hubbard last year earned a big contract with the Browns after steady growth as an off-the-bench player in Pittsburgh. He can be trusted to pass-block on an island, which is rare among NFL right tackles and huge for our team, given how often we’ll operate out of spread formations.

Both are quality starters. Leno, in fact, is probably a better left tackle than the much more gifted Bolles. Both Leno and Andrews have not just subpar size, but modest athleticism. The only way you overcome that is with outstanding mechanics and a strong football IQ. We’ll feel comfortable each week with our depth up front, which is uncommon in pro football.

Judging from this group, you might say that being small is advantageous for a defensive tackle, given that Donald and Flowers are two of history’s highest-paid defensive linemen. One could argue that Flowers is more of a defensive end than defensive tackle, though he is not a pure edge player. We’re more than comfortable playing him fulltime inside. The question is, who in our group can line up shaded over the center on first and second down? (Flowers would get the first crack.)

This group needs no explanation. All four are dominant pass rushers, with Miller being one of the all-time greats and still firmly in his prime. Setting the edge in run D could, at times, be problematic, though Miller is strong there and Ford is better than you’d guess. Ngakoue and Ingram are also viable run defenders if they can operate on the move. We’ll try to put all these guys on the move as much as possible, especially since they’re supple and explosive on designer rush tactics like stunts and twists.

Small linebackers must be kept clean from blockers, which is difficult when the defensive tackles are also small. Most likely, on early downs, this team will gamble and blitz often, hoping to make offenses play on OUR schedule and at OUR speed. Blitzing requires man coverage. And yes, the ’backers are often part of the blitzes, but having some who can also cover makes us that much more diverse. Jones and Thompson for sure can cover. The Falcons put a lot of burden on Jones to handle running backs on his own in man-to-man.

As for Thompson… the Panthers have been known to play base 4-3 personnel against three-receiver sets, treating Thompson essentially as a slot corner. That’s extremely unusual, and it should be noted Thompson’s slot snaps come mostly in zone coverage. We’d want him to match to tight ends in man. Alexander and Kendricks are both middle linebackers, which works well because Jones plays the weak side and Thompson can play the strong side.

One would think that it wouldn’t be difficult to find cornerbacks smaller than the average (5' 11, 192 pounds). Turns out, there are just a lot of corners who are 5’11” to 6’1” and at least 185 pounds. This team is limited to corners who are below both marks, and the pickins’, like the very corners themselves, are slim. Aside from Jackson, these men are primarily slot corners. We’d probably experiment with Young outside (he got snaps there as a rookie). Overall, a limited cornerbacking group throws a serious wrench in our plans to blitz and play man coverage, which is why the team would only send pressure on early down, when the blitz can double as a run-stopping tactic. On third down, as much as we can without being predictable, we’ll go zone and trust our scarier-than-hell pass rush to get home.

The versatility of Mathieu and Diggs should help out, but only by so much, given that neither has played much outside corner (which is by far the weakest spot). Diggs is a pure, bona fide football player in every sense. It wouldn’t be fair to play him at outside corner, but it wouldn’t be surprising if he could do so and stay above water. Stylistically, Matheiu and Baker are basically the same guy (which is why the Cardinals kept the cheaper Baker and let Mathieu leave two years ago). Both can play back deep, but they’re better in the slot. Neither is as good as Diggs, though. Would it be wiser to just play Diggs in his most natural safety position?

Defense is the concern, especially on early downs, where teams can run right at us. But let’s not overthink it, either. Any D-line that features Donald AND Miller will be tough to face, no matter the situation. On offense, Brees and mismatch-making targets like Hilton, Reed and White provide schematic flexibility, and our O-line is better than you’d guess, which will make us competitive on traditional play designs. Division titles and Super Bowl appearances are the expectation with this club.

This article was written by Andy Benoit from Sports Illustrated and was legally licensed through the NewsCred publisher network. Please direct all licensing questions to legal@newscred.com.