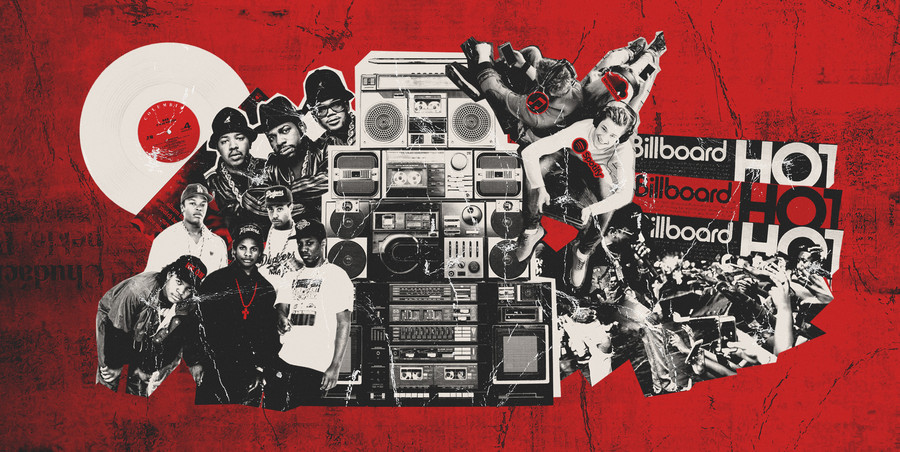 Youth. Rebellion. Fun. The ingredients for rock ‘n’ roll are as timeless as the songs they inspire. Before rock ‘n’ roll, young Americans gravitated to blues, jazz, and bluegrass. Anywhere that young people could gather around music without the watchful eye of adults or government became an epicenter of culture.

It should come as no surprise then that rap would emerge as the new rock ‘n’ roll. In January 2018, Business Insider and several other outlets reported that rap had surpassed rock as the most listened to music genre, according to statistics company Nielsen. Rap, which purists would differentiate from hip hop, was born in the Bronx where Black, Dominican, and Puerto Rican youth would host house parties, and DJs played the latest in disco, funk, and dance music.

Emcees, coined from the acronym MCs or "Master of Ceremonies", began as party hosts who would get the crowd moving through a series of call and response chants. Some of the MCs even came up with their own branded intro chants. You’ve likely heard these call-and-response choruses before—the most famous rap inspired by these moments comes from Kurtis Blow, whose track “The Breaks” became the first rap song to be certified Gold, selling over 500,000 copies and charting in the top 10 on multiple Billboard charts before there even was a rap chart. If you’ve ever heard this iconic opening, then you’ve likely heard “The Breaks”:

Clap your hands everybody

If you got what it takes

Cause I’m Kurtis Blow and I want you to know

That these are the breaks

Legendary songs like “The Breaks” and “Rapper’s Delight” made hip-hop a household sound, and began the sample culture that would dominate the hip-hop sound well into the 1990s. With the explosive expansion of this new American art form came its commercialization, and in the mid-1990s hip-hop became what we now know as rap—the flashier, commercialized, pop version of the original impact art.

In the same way that rock gave way to hair metal, hip-hop gave way to rap, but unlike hair metal or rock, the modern rap movement is aided by the independent spirit and by tools to circumvent the “gatekeepers”—big money producers, studios, record labels, and networks—to create a worldwide buzz. But the independent spirit doesn’t happen alone. There are three main areas that, when given a closer look, are directly responsible for the rise of rap as the new rock ‘n’ roll.

The role of technology is irrefutable in the growth of both rap and rock. Music is spread by being shared, and technological advances have made sharing music faster, easier, and more accessible. In the 1940s and 1950s, when rock 'n' roll was soaring in popularity, it quickly rose alongside the modern radio and the automobile stereo. Up until then, radio culture revolved around softer genres like jazz and bluegrass, or around radio shows like "The Lone Ranger" and CBS "Radio Mystery Theatre".

When rock ‘n’ roll hit the scene, it soared through radio speakers and hit everything in its path, scaring parents and exciting teenagers. With the rise of automobile manufacturing and the explosion of suburban life following World War II, car listening became a widespread activity, making rock music ubiquitous and turning rock bands into household names.

And then there was television.

Shows like "The Ed Sullivan Show" featured rock acts regularly to the entire nation and were responsible for breaking now-legendary acts like The Beatles, The Monkees, and more. This was a revolutionary time—at no other point in history was it possible to communicate with an entire, captive audience at once, and all of a sudden, millions of people could share the experience of hearing and seeing their new favorite band without purchasing a concert ticket or traveling miles away.

But rock ‘n’ roll, in addition to being an experience, was becoming a commercial endeavor, and the rise of vinyl and the record player gave music fans the ability to buy, listen to, and share their favorite music with one another. Vinyl was scalable; concerts, television appearances, and radio play were not.

Similarly, rap music has risen alongside the growth of the internet and media streaming. From Spotify to Tidal and beyond, the internet has taken rap from bedroom studios in Atlanta to audiences around the world. With a global audience to capitalize on, rap is experiencing as close to an organic rise as is possible—music fans, with an infinite library of music to choose from, have chosen rap as their preferred genre.

Computer technology has also made music production and recording easier than it’s been at any point in history. By now, there are numerous charting rap songs that were written, recorded, and distributed all from a laptop in a bedroom. Lil Nas X’s “Old Town Road,” which broke the record for Billboard’s longest-running number-one single in history, was made using a beat that the young rapper purchased from YouTube. When it came time to release the song, Lil Nas X and young rappers like him are able to use yet another emerging technology: social media.

Social media has strongly aided the rise of rap. The ability to build a large following online via Instagram, SnapChat, Twitter, and most recently, Tik Tok, has given rap artists a totally scalable way to move their music throughout the globe. Not only that, but the culture surrounding rap also lends itself to lean, spreadable content—because rap was born out of DIY fun, there’s a built-in audience acceptance of “imperfect” content. The manicured, pristine and polished aesthetic of many pop stars on Instagram is being up-ended by rappers like Cardi B, whose wildly charismatic personality and disdain for perfection is an attractive antithesis to high-end visual production.

In short, rappers don’t care. And the public loves them for it.

The “I don’t care” attitude isn’t new to entertainment, nor is it unique to rap. The rise of rock ‘n’ roll was founded on the rebellious spirit of the 1960s, a decade of sex, drugs, and, well, rock ‘n’ roll. A nation full of young adults in a post-war United States were rebelling against the conservative values of the 1940s and 50s, joining protests against the Vietnam War, marching in support of the Civil Rights Movement, and testing boundaries as they cuddled their way into the sexual revolution. Hippies were happy, and rock ‘n’ roll was their soundtrack.

These same hippies have gone on to become Boomers, a generation of parents and grandparents who are characterized as unsympathetic to the economic and social conditions they helped create, and who have no problem vocalizing their disdain for millennials, Gen Z, and their emerging internet culture. So much so that young people have coined the phrase “OK Boomer” as a sarcastic response to any Baby Boomer making an unfounded complaint about millennials or Gen Z. Rap music and the raunchy lyrics that are commonplace can be interpreted as young people’s way of saying “Get off our backs,” in the same way hippies would sing along to The Beatles’ “Revolution”.

Let’s not forget the elephant in the room. Sex sells, and rap is full of it. Video vixens are as synonymous with rap music as 808s and microphones, and the eye candy result has spread rap across the globe, both in broad view and in private. For better or worse, American culture loves sex, and rappers aren’t afraid to leverage it around their music.

From 1955 to 1975, the US was engaged in the Vietnam War, drafting soldiers from across America to go and fight what would end up being an unsuccessful military campaign. Back home, young people across the United States were marching to protest the draft and the war, and music festivals like Lollapalooza and Woodstock were epicenters for liberal thought and protest rallying. Rock ‘n’ roll became associated with anti-establishment, anti-war, and anti-oppression sentiments, and many rock bands were outspoken about their anti-war ideals. When John F. Kennedy became the youngest president ever elected to office, he seemed to symbolize the spirit of youth that accompanied rock. When he was assassinated, rock music was there to console a world shaken by the national tragedy.

Today, rap has risen in the age of two first-ever American presidents. Barack Obama’s election as the first-ever Black president represented a historic shift of the dynamics of the United States politic, a symbolic reconciliation of America’s oppressive past and an acceptance of Black culture and Black people. Donald Trump’s election and momentous rise to power marks a pendulum swing back to America’s conservative roots, a reminder of the quiet hatred that America still hasn’t fully addressed and a sign of the disenfranchisement of middle America.

Rap music sits in the middle—a representation of Black freedom, a voice of rebellion, and a good time during hard times.

Rap music is bigger than catchy hooks and flashy lifestyle. Rap music is what happens when individuals lose faith in institutions and are given the tools to take things into their own hands. Rap music is what it looks like when young people get to be famous without anyone’s permission. To put it in the words of Kanye West, hip hop and rap are “the first art form created by free Black men” in America.” We don't know what the next rock ‘n’ roll will be, but we’ll likely call it The New Rap.

How Artists Can Optimize The Virtual Concert Experience

Virtual concerts are finally getting more interactive. Four months into the ...