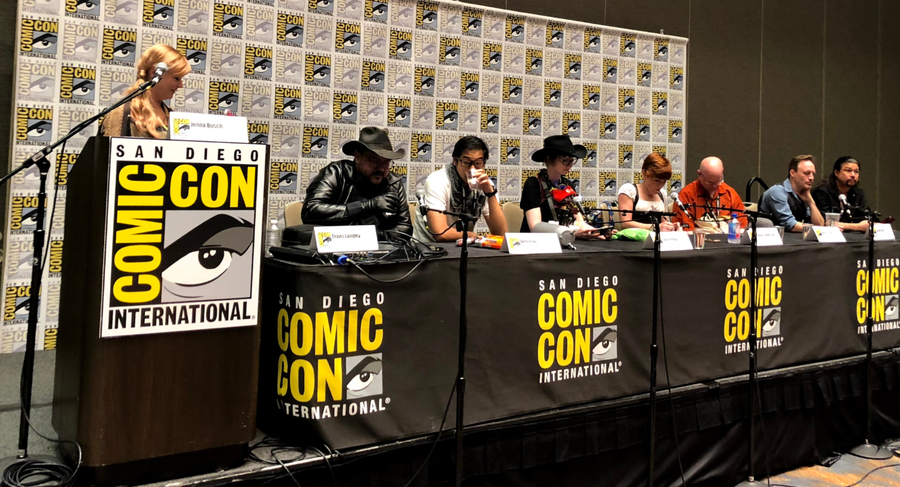 The Science of Westworld & Rethinking Our Relationship With Technology

Comic-Con 2018 wrapped up on Sunday with one of the more intriguing and technologically relevant panels of the weekend: “The Science of Westworld: Violent Insights." Referring to the key phrase from the show "These violent delights have violent ends", the panel explored some of the ethical quandaries raised by Westworld, including the thin line between AI and human intelligence.

"We’re at a point where we need to rethink how we treat and think about technology," said Sarah Petkus, a roboticist known from MythBusters: The Search. "We treat technology like a tissue box. With our phones, we use them up and throw them away. Then we get a new one to replace it. If that translates to AI, we’re going to run into a problem."

Reframing the way we think about technology right now has the potential to help us avoid a Westworld-type situation down the road. "When we empathize with technology, it almost becomes a piece of us," Petkus added. "We need to think of our relationship with tech as parenting. You can either be a good parent or a bad parent. Your child is going to grow up and reflect how you treated it growing up. If we’re talking about AI, we should reconsider that."

Petkus was speaking from experience. Throughout the entire panel, she had a robot she affectionately named "NoodleFeet" dangling from her neck. It took her three years to build NoodleFeet, and she's developed a strong connection with the robot.

The mythkids warming up before the Westworld panel this afternoon... the mics were totally on ?#westworld #SDCC2018 #inTheMoment pic.twitter.com/DP1z53W1wf

Tension rose when Allen Pan (also from MythBusters: The Search) asked Petkus, "Would you be upset if I pointed a gun at NoodleFeet's head?" Petkus answered affirmatively, and Pan promptly picked up a Nerf gun and pointed it at the robot. Several members of the crowd gasped, and Pan immediately put the gun down to deescalate the situation.

After everyone calmed down, Pan said, "For AI, part of having it be more accepted and treated more fairly is kind of hijacking the empathetic part of people. We anthropomorphize things like our cars. Often times when a bomb robot is blown up in war, the military requests to have it repaired. They project, and they give it a name."

He expanded on his point by bringing up a real-life example. "They want Scooby [a robot that saved the day on 19 different occasions in Iraq]. They don’t want a new one even though functionally it’s a robot with spare parts," said Pan.

When it comes to robots, there's a spectrum of how they're treated by humans. Empathy and anthropomorphism sits on one end of the spectrum, and complete dehumanization sits on the opposite end. Westworld has done a great job showing what dehumanization looks like. Dr. Travis Langley (author of the upcoming Westworld Psychology: Violent Delights) said:

When we have the 'us vs. them' mentality, there’s a dehumanization of the other person and that's what we see in Westworld.

Throughout history, dehumanization and the marginalization of others has sparked countless revolutions. Westworld is far from being the first show or film to leverage this concept for their narrative, though. "All good sci-fi is a reflection on contemporary issues," said Pan. "It’s a good way to talk about marginalized communities. They — robots in this case or aliens in others — present as something that you would at first assume is less human, which [can also be] a great metaphor for [treatment of] minorities."

To expand on this concept of dehumanization, the panel explored the lasting impact of violence against robots as depicted in the show. In other words, if a human committed violent acts in Westworld, would they be more inclined to carry out violent acts after they left the park and returned to the real world?

There's (luckily) no apples-to-apples real-world comparison for Westworld's violence. However, psychologist Dr. Martin Lloyd believes that playing violent video games is a somewhat similar use case, and he's conducted extensive research on the subject. "Certain video games do absolutely make people more violent," Lloyd asserted to the room. "Some of the things that drive that violence are some of the things you see in Westworld. These games are more immersive like Westworld. They are more graphic like Westworld. We don’t know if it [gamers becoming more aggressive] lasts for years, but it at least lasts for a few hours."

Lloyd concluded by circling back to empathy. He said, "Although we don’t really know if the aggression itself lasts a long time, we do know that the desensitization to violence can lead to a lack of empathy."

(To be fair, some recent studies have also shown that playing video games has no long-term effect on aggression and empathy.)

In any case, our current relationship with technology raises a lot of red flags, and Westworld has helped its fans become more aware of this problem. It's not the show's job to solve the problem for us, but it's clear that we have a lot to think about as AI and robots become more complex.