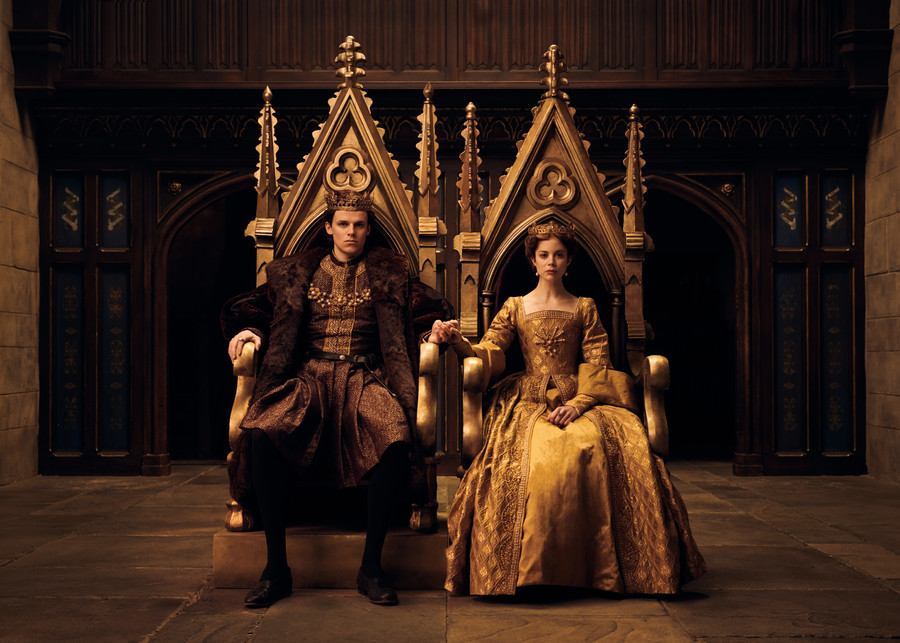 When it comes to King Henry VIII’s infamous six wives, Anne Boleyn usually gets all the attention. Not only is her whirlwind royal romance filled with flirtatious intrigue, it also singlehandedly changed the course of British history, as seen in the 2008 Natalie Portman film "The Other Boleyn Girl". But Anne isn’t the only one of Henry’s wives with a captivating history. STARZ's hit series, "The Spanish Princess"—which returns October 11th—explores the life of Henry’s first wife, the proud and fearless Catherine of Aragon (Charlotte Hope of "Game of Thrones"). And it turns out Catherine’s story is every bit as complex, compelling, and, yes, sexy, as Anne’s.

History usually paints Catherine as the loyal, boring first wife that Henry dumped for Anne, which is exactly how she appears in "The Other Boleyn Girl". "The Spanish Princess" offers an entirely new perspective as it zooms back in time to focus on Catherine in her youth, when she was a beautiful, headstrong princess tasked with uniting the powerful kingdoms of Spain and England.

Raised by a mother who literally charges into battle in armor, Catherine sees it as her God-given destiny to become Queen of England. Far from a passive wife, Catherine is an active and captivating female character brought to life with a fiery spirit by Charlotte Hope. Though Catherine is principled and compassionate, she’s also a savvy, ambitious political player—although this trait leads her to tell a massive lie that just might be her undoing over the second half of the series.

"The Other Boleyn Girl" captured just how scandalous the Tudor family could be. Before marrying Anne, Henry had an affair with her sister, Mary (Scarlett Johansson), an arrangement that was set up by the Boleyn girls’ own father.

But that’s nothing compared to how dramatic things get on "The Spanish Princess". Before marrying the future Henry VIII, Catherine first weds his ill-fated older brother and then becomes engaged to his father—shocking bits of real-life history that could give "Game of Thrones" a run for its money. Thanks to these unusual character dynamics, "The Spanish Princess" is able to combine the emotional stakes of a family drama with the intense plotting of a political thriller, all with a dash of Tudor romance on top.

In "The Other Boleyn Girl", Eric Bana plays Henry VIII as a demanding monarch at the height of his power. In "The Spanish Princess", however, Ruairi O'Connor portrays the future king as a young man just coming into his own. Though “Harry”—as he’s known to his family—can be cocky and arrogant, he also has hidden vulnerabilities and a deep sense of loyalty, qualities that are on display during his passionate courtship with Catherine. "The Spanish Princess" peels back the layers of the Henry we think we know to show who he was before he became one of history’s most infamous monarchs. And in this telling, at least, he's kind of a dreamboat.

The Mind of Philippa Gregory

"The Other Boleyn Girl" and "The Spanish Princess" share more in common than just their characters. They’re both based on novels by author Philippa Gregory, the “queen of British historical fiction.” Gregory has spent her career reclaiming the stories of women that history overlooked, and "The Spanish Princess"—which is adapted from her novels “The Constant Princess” and “The King's Curse”—continues that trend.

Having helmed STARZ’s previous Gregory adaptations, "The White Queen" and "The White Princess", showrunners Emma Frost and Matthew Graham once again made it their mission to put women front and center in "The Spanish Princess". In addition to Catherine, the first half of the series offers rich roles for Alexandra Moen as Henry’s icy mother and Harriet Walter as his scheming grandmother. The second half will focus on Henry’s younger sisters as they deal with their own royal marriages, which will bring a dose of youthful, rebellious energy to the series.

For something a bit more grownup, there’s also Henry’s quietly tragic aunt Maggie Pole (Laura Carmichael of "Downton Abbey"), a selfless woman haunted by wounds of the past. Like Mary in "The Other Boleyn Girl", Maggie longs for a simple life in the country but keeps finding herself pulled into the toxic world of the Tudors. The second half of the series will see Maggie make an unexpected connection with statesman Thomas More (Andrew Buchan of “Broadchurch”), and Frost and Graham have cited the poignant British romantic drama “The Remains of the Day” as inspiration. In other words, get your tissues ready.

While British period pieces can be notoriously lacking in diversity, "The Spanish Princess" boldly shifts the historical lens. One of the series’ central characters is Catherine’s lady-in-waiting Lina (Stephanie Levi-John), a Black noblewoman who falls for lower-born Muslim soldier Oviedo (Aaron Cobham). As two Black Spaniards trying to carve out a life in Tudor England, Lina and Oviedo’s love story provides a unique and unexpected perspective on English history.

Like "The Other Boleyn Girl", "The Spanish Princess" doesn’t disappoint when it comes to sumptuous production and costume design. Catherine’s colorful, intricately constructed Spanish fashions emphasize the fact that she’s an outsider at the Tudor court (all while looking absolutely gorgeous in the process). With the second half of the series set to expand the story to Scotland and France, there will be even more cross-cultural Renaissance aesthetics to enjoy. Plus, we’ll even get to see a pregnant Catherine decked out in armor, ready to ride into battle like her mother.

The second half of "The Spanish Princess" promises to broaden the show’s world and add even more depth to its central heroine. And given that we’ve already seen a brief glimpse of Anne and Mary Boleyn as little girls, the end of "The Spanish Princess" could bring us to the brink of "The Other Boleyn Girl"—closing the loop on a fascinating stretch of history and the compelling women who shaped it.