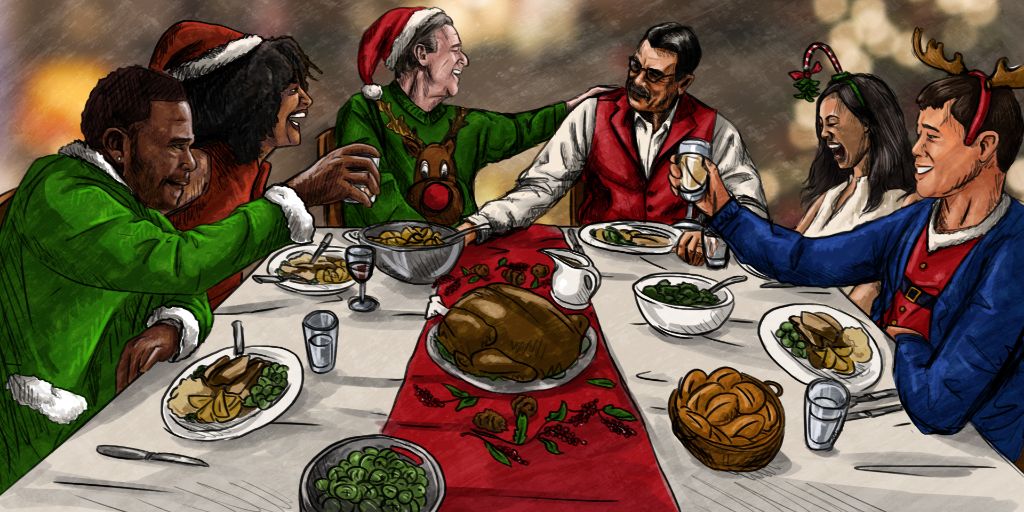 The Top TV Families We Want to Spend the Holidays With

Obviously, the pantheon of television has some great ones—the Bunkers, the Keatons, the Gellers, Coach Taylor and Tami. But this holiday season, we want to look at some of our favorite families on TV for our list of fictional families we would most like to spend the holidays with.

Who would have thought that a sitcom revived 21 years after its first successful run would return to be just as delightful as it was the first time around? Enter the Conners of Lanford, Ill. This working-class family is always keeping it real and also showing real heart. It may not be the jolliest of holidays, but it would definitely be an opportunity for growth.

Not only would this family show everyone how to do Hanukkah up right, but there would inevitably be some kind of huge family fight that is resolved in time to light the menorah and share some latkes. If the Conners are a little too brash for your taste, the Goldbergs are lively, loud, and very loving, making them the perfect choice if you like your sentiment with a side of snark.

The Huangs, Fresh Off the Boat

For holidays with the Huangs, you would probably either have to eat at their Cattleman's restaurant or go over to their house, because Jessica (Constance Wu) is going to insist on hosting. Either way, as long as Grandma Jenny is there to liven things up with her running commentary on all the things the family is doing wrong, it'll be worth it.

In addition to a festive family dinner, the Johnsons would definitely tee up a movie night, which has become a staple of our 2020 routine. For a few family friendly flicks, check out our list here. But once the kids are asleep, here are a few for the adults—The Invisible Man, The Old Guard, Bad Boys for Life, The Gentlemen, and The Way Back. Now, where to start.

The Pearsons, This Is Us

For straight-up sentimentality, you can't do any better than the Pearsons. The only question is which era would you choose to visit in this hypothetical world where we can hang out with our favorite TV families? It's a real toss-up between when the kids were little, when the kids were teenagers but before Jack's (Milo Ventimiglia) death, and the present day. We think we'd give the edge to the 1980s when the kids were little because then we would get to experience "Pilgrim Rick" and Police Academy 3: Back in Training for ourselves.

Family dinners are a staple of this CBS drama, especially when the Reagans decide to create some happy family holidays for Eddie (Vanessa Ray), who did not grow up with the most loving family. "After every Christmas dinner, we put down our weapons, go out back and play soccer," Erin (Bridget Moynahan) told her last year.

These crimefighters may face some dark things patrolling the streets, but their family gatherings are a real treat.

The Found Family, The Good Place

Not everyone in the world has a loving family with whom they want to spend time, so we thought we'd also highlight a couple of non-traditional families with whom we would love to carve the roast beast.

On The Good Place, Michael (Ted Danson), Janet (D'Arcy Carden), Eleanor (Kristen Bell), Chidi (William Jackson Harper), Tahani (Jameela Jamil), and Jason (Manny Jacinto) are total strangers when they meet, but over four seasons they grow into one of our favorite "families" on TV. Breaking bread with them would undoubtedly be hilarious—plus we'd get to see the good and/or the bad place(s). Bonus!

While The Good Place family was forced together, the characters in "Pose" have a chosen family, as a lot of them were shunned by their biological families for being homosexual or trans.

How amazing would it be to celebrate Christmas in the ballroom? We can only imagine how Blanca (MJ Rodriguez), Elektra (Dominique Jackson), Pray Tell (Billy Porter), Angel (Indya Moore), and the rest of the gang would pull out all the stops for the holidays. As long as no one lets Blanca and Angel roast the turkey, it should be all good.