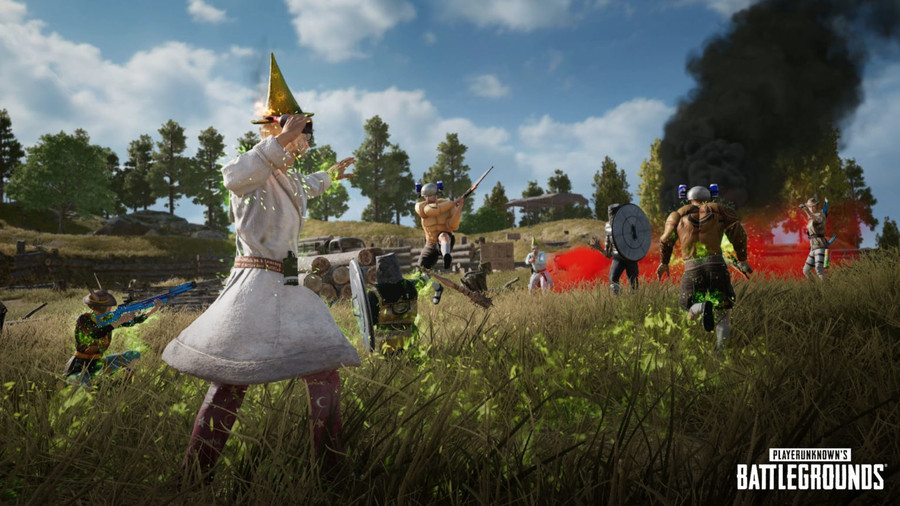 Three video games whose 2020 April Fool's silliness continues past the first of the month: A swords and sorcery makeover for "PUBG," an abundance of tricksters for homebound "Pokémon Go," and a plethora of bugs in "Totally Accurate Battle Simulator," plus daylong pranks from "Call of Duty," "Overwatch" and "Apex Legends."

This leading battle royale swaps camouflage for conjurors and crossbows, experimenting with crafting and class-based characters, as players choose between the Barbarian, Ranger, Wizard and Paladin. The event runs until midnight PDT on April 7.

Are you a class clown? 🤡 A trickster? 🤪 A jokester? 🃏 An event featuring some well-known Pokémon pranksters and masters of disguise is coming your way, Trainers! https://t.co/bhKRMZANRA pic.twitter.com/88DNNwpikY

Mischief and hoodwinks are celebrated as the rare Stunkfisk, a Trap Pokémon, makes its debut (primarily as a Field Research task reward), while a selection of object-mimicking, disguise-wearing creatures pop up more frequently. The event runs until 10pm local time on April 7.

BUGS in your TABS

Other games that shared the spirit of April Fools' with their playing communities on the day included "Overwatch," "Call of Duty: Modern Warfare" and "Apex Legends."

I open up #Overwatch to find my hero's have... Googly eyes @PlayOverwatch pic.twitter.com/QAdH2PMZCi

"Overwatch" superimposed googly eyes on top of its heroes (and their assistants).

@CallofDuty whoever came up with the names on Modern Warfare needs a promotion, I without a doubt fell for the playlist “I have trust issues” I was hoping for 24/7 Shipment what I got was 24/7 Piccadilly. Bravo.

"Call of Duty: Modern Warfare" introduced two new map playlists: the first told players it featured one of the game's most popular maps, Shipment, but was nothing but the scorned Piccadilly; the other rewarded them with a hectic 10 versus 10 Shipment matchup.

"Apex Legends" rolled with a similar theme, taking its derided Mozambique handgun and turning it into a fully tricked-out variant, with automatic fire and expanded ammunition capacity.