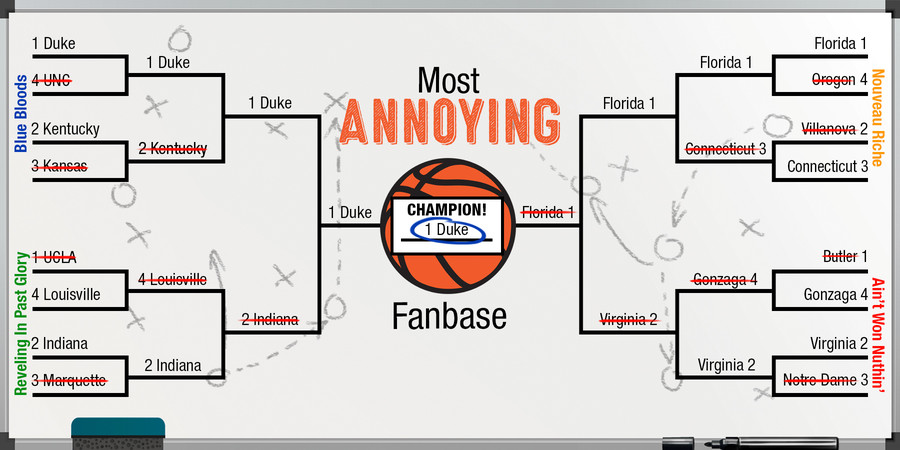 This is College Basketball’s Most Annoying Fanbase

The votes are in, and in a result that should surprise no one who's ever heard of college basketball, Duke fans can lay claim to yet another title. This time, as the Most Annoying College Basketball Fanbase.

Even after the gator-chompin’ University of Florida fans stole our hearts and relinquished what was left of their dignity in a Cinderella run to the final, they had no chance against the Blue Devils. The only surprise was the final score, with Coach K’s acolytes taking home a 59%-41% victory in the final round of voting.

Congrats to the Gator fans on an amazing run, but from the bare beginnings of this competition, true hoop-heads knew who would take the crown. Duke isn’t just the most annoying fanbase in college basketball; they practically created the concept of an annoying college basketball fanbase.

They are the Notre Dame, the Celtics, the Yankees, the Cowboys all rolled into one: their irritating supremacy might be challenged, but the currents of time will always bear the boat back to where it belongs. It’s official: the student section at Cameron Indoor Stadium is once and forever the home of the most annoying fanbase in college basketball.

What makes the Duke fan truly annoying? Let’s review the feats that brought them to this hallowed ground:

Anybody can boo. The Duke fan makes their in-game invective personal, rude, and obsessively researched to inflict maximum emotional damage on opposing players. They once chanted “YOU WILL WORK FOR US SOMEDAY” at the public school visitors from NC State. They popularized AIR BALL. They enact routines for foul outs, for missed free throws, everything. So much viciousness and bile, spilled by so many people, focused all at once on a single opposing player, and yet capable of irritating us all.

Wojo. The one kid with that floppy haircut. Jonathan Clay "JJ" Redick. Scrappers. The worst kind of college basketball player, the ones who go out there, give it their all, play the "right" way, and remain unconcerned if they injure an opponent as they throw their body around with reckless abandon. Obviously, a fanbase composed of try-hards will look to these players as their golden idols. It's the reason Grayson Allen gets almost as much love as Zion Williamson despite having no business being on the same court. In this way, Duke fans relish in their players' own inferiority even as they gloat over the program's on-court success.

There has to be a better way to get tickets than to set up Krzyzewskiville outside of the ticket office. Actually, scratch that: K-ville isn't even a ticket line. There are no tickets. The students get plucked from the tent city and led in 90 minutes before the game. It's all highly regulated, with rules and stuff. Oh, and sometimes Coach K deigns to buy the collected urchins pizza, bread and circuses for the (literally) unwashed masses. Instead of building an ad hoc gameday society, how 'bout you get out there and contribute to actual society? It’s troubling. Get your lives together.

It's a bit weird to ascribe so much paternal energy to your school's basketball coach. Roy Williams is an accomplished coach, but his leadership and genius never brought a Kansas or UNC fan to tears. Duke fans can’t even imagine criticizing an authority figure that brings them so much victory. College is supposed to be a time when you learn to challenge authority, not get mass-brainwashed into wishing a guy whose name nobody can spell was your real dad.

That’s the kicker, though. They just…win, year after year. It never stops. They win in conference, out of conference, in the tournament, on the recruiting trail. They’re good for an NCAA title every few years. It’s just too much for their fans to handle. Some hard humility would teach them better manners, but except for occasional home losses to UNC, they just don’t get stiffed in a way that could humanize the program in the eyes of its fanatics. It's like if Harrison Ford had never been a carpenter before making Star Wars and Indiana Jones.

So there you have it. Congratulations (?) to the Cameron Crazies on this monumental achievement that will ring in the halls of college basketball forever. And to any Duke fans reading and probably nodding smugly, please remember: it’s funny and it's ok that you lost to Michigan State by one point this year when we all know you should've won and are the best team in the nation. Let's hope it happens again next year, and the year after that, and the year after that, and...