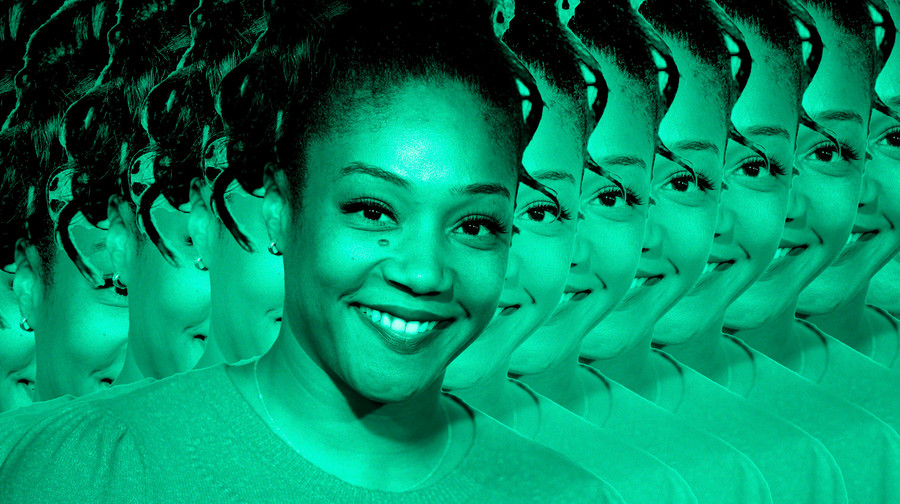 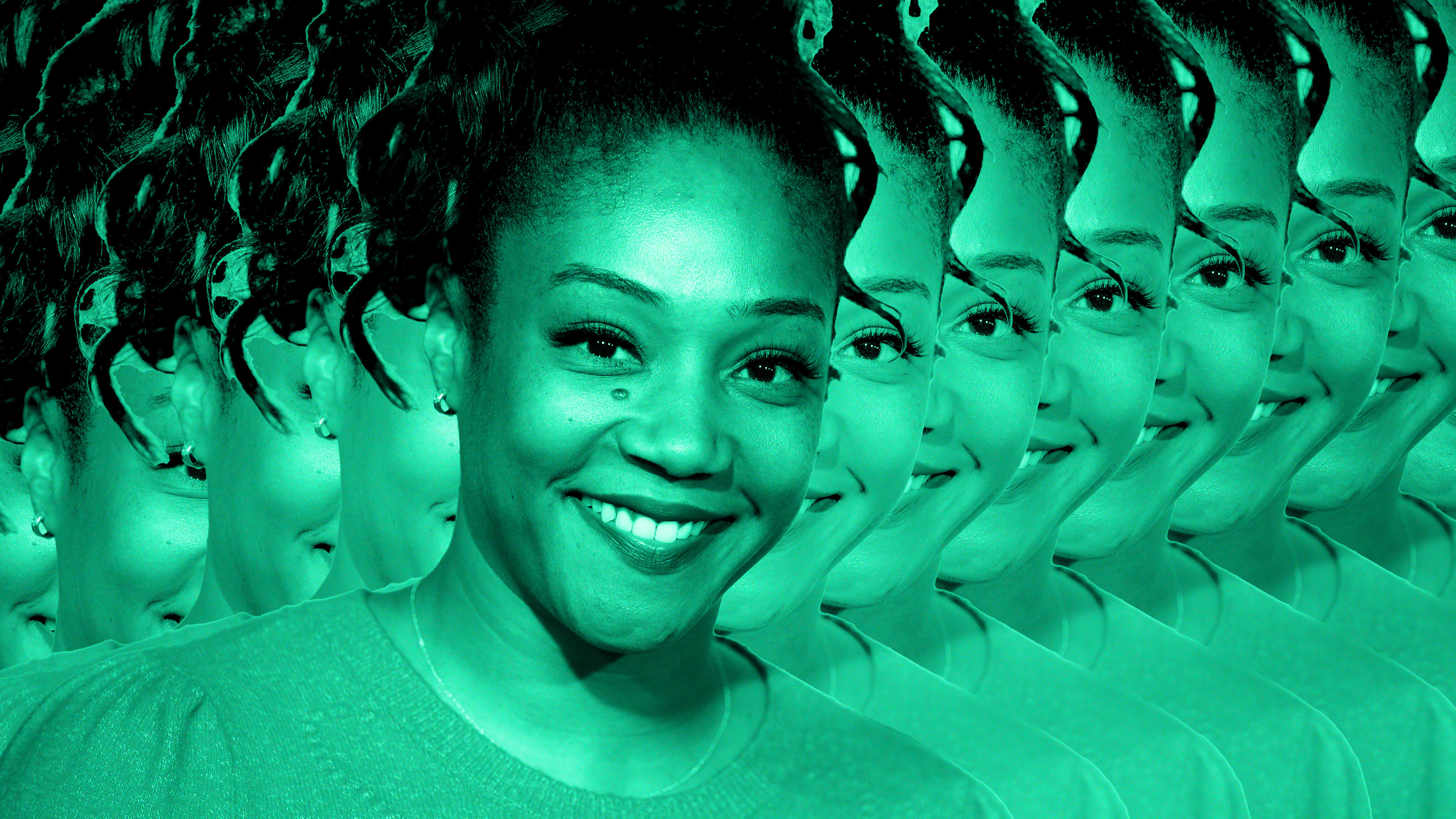 Tiffany Haddish is adapting well to life at home in Los Angeles, riding out the coronavirus-induced isolation with her brother — but not with Common, contrary to certain internet rumors that she was more than happy to stoke. She has everything she needs for the long haul, including a new Netflix series, “Self Made: Inspired by the Life of Madam C.J. Walker,” in which she plays Lelia, the titular entrepreneur’s spirited daughter.

Madam C.J. Walker, born Sarah Breedlove and portrayed by Octavia Spencer, was America’s first female millionaire to have amassed her own wealth. In the 1900s, she developed a hair care line for Black women and built an enterprise that employed thousands. Lelia convinced her mother to let her open a salon in Harlem, where she eventually played host to many of the neighborhood’s most talented artists. From 1919 until her death in 1931, Leila served as president of the company her mother founded.

Haddish called me on Wednesday to discuss “Self Made,” though we spent most of the conversation gabbing about what she’s been up to during the coronavirus quarantine. Here are the highlights, including a crucial video chat with her “Girls Trip” co-stars.

“Fuck yeah,” Haddish said when asked whether she’s enjoying home life. “I have a garden. I’ve got plenty of food in the freezer. I got Netflix, Hulu, Amazon Prime; I’ve got cable. I have a room that I’ve got to clean out. I have so many bills that are a year old that I just paid online.”

Indeed, Haddish has been making fine use of her backyard garden. On YouTube, she posted a 24-minute video in which she sautées chard she grew herself and answers viewers’ questions while her pitbull sits on the floor watching. “Your girl can cook,” Haddish says after tasting her creation. In another video, she dons a child’s mermaid suit and hops through the garden to pick mint, chard and celery for her juice maker. Those results aren’t so tasty, though: “Goddamn, that’s nasty,” she says. 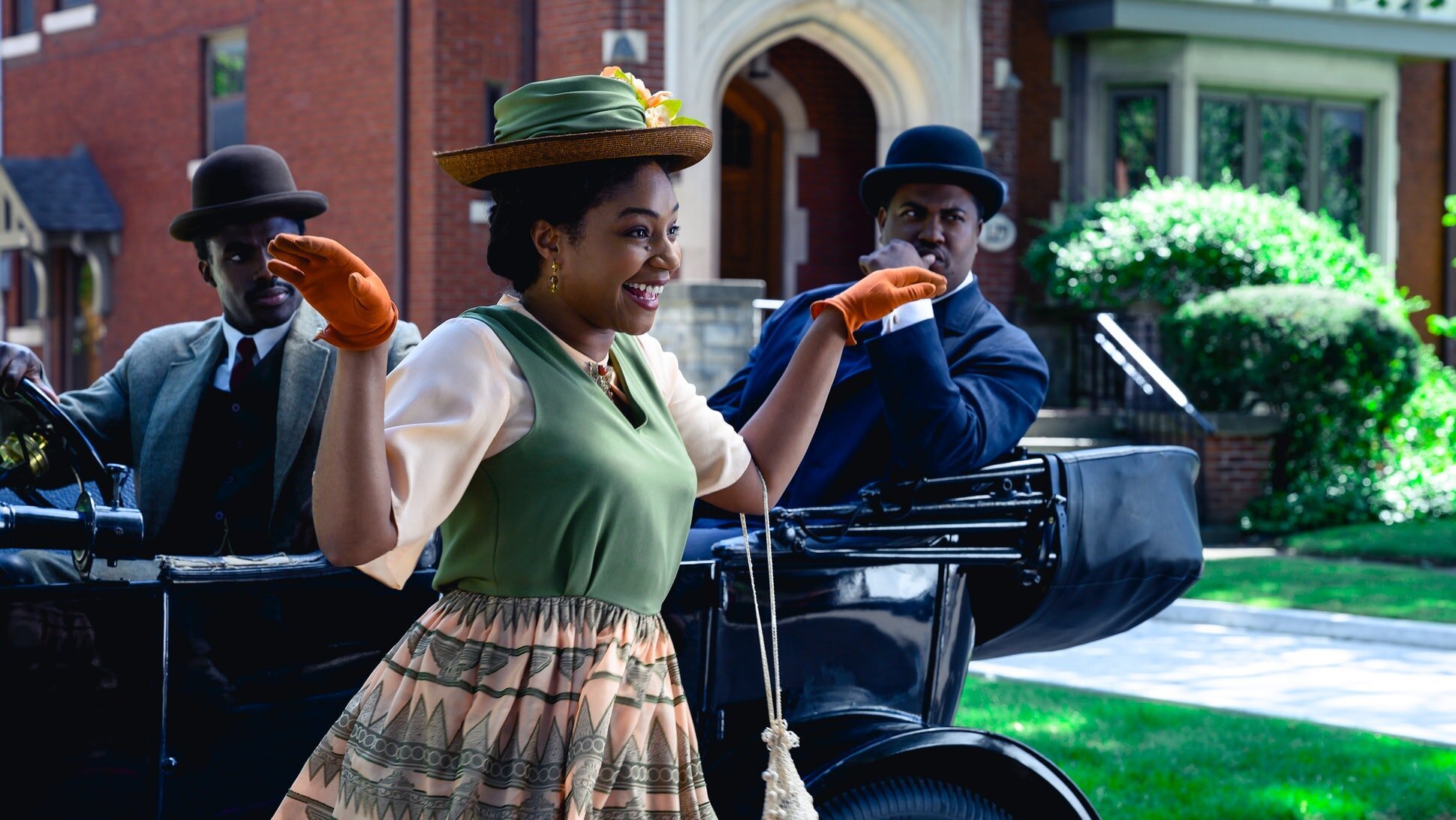 Tiffany Haddish in "Self Made: Inspired by the Life of Madam C.J. Walker."

When she isn’t gardening, she’s probably bingeing. In addition to “Self Made,” which she’s viewed in full three times “to make sure somebody watched it,” Haddish’s recent list includes “Tiger King,” “Wild Wild Country,” “Locke & Key,” “I Love Lucy” and “My Three Sons.” Her favorite “Lucy” episodes are the chocolate factory and the one where Lucy pretends to be a ballerina.

“I also watched this movie that Lucille Ball made before ‘I Love Lucy,’ and she actually can sing,” Haddish exclaimed, alluding to Lucy Ricardo’s infamous tone-deafness. “It’s so funny because people have been tweeting about the song I sing in ‘Self Made,’ and I’m like, ‘They made me sing that song five times just to make it worse each time.’ So I feel like Lucille Ball right now.”

At Eddie Murphy’s behest, she also watched the classic 1963 comedy “It’s a Mad, Mad, Mad, Mad World.” I recommended “Rat Race,” a loose remake of “Mad World” starring Whoopi Goldberg and Jon Lovitz, and she said she’d add it to her list.

Late at night, however, she’s found herself practicing a new skill: splits. It hasn’t gone well, but she’s working on improving. “I want to play a gymnast in a movie,” she said.

The “Girls Trip” ladies have been in touch.

Haddish and her “Girls Trip” co-stars — Queen Latifah, Regina Hall and Jada Pinkett Smith — had a joint Zoom call this week to check in on one another amid the pandemic. Everyone is doing well, Haddish said, and their conversation quickly turned to why they still haven’t gotten “Girls Trip 2” goin.

Universal Pictures, which released “Girls Trip” to blockbuster success (and Oscar buzz for Haddish’s breakthrough performance) in 2017, has never officially greenlit a sequel, but various cast members have been talking about doing one for a while. “We are all in,” Queen Latifah said last year. 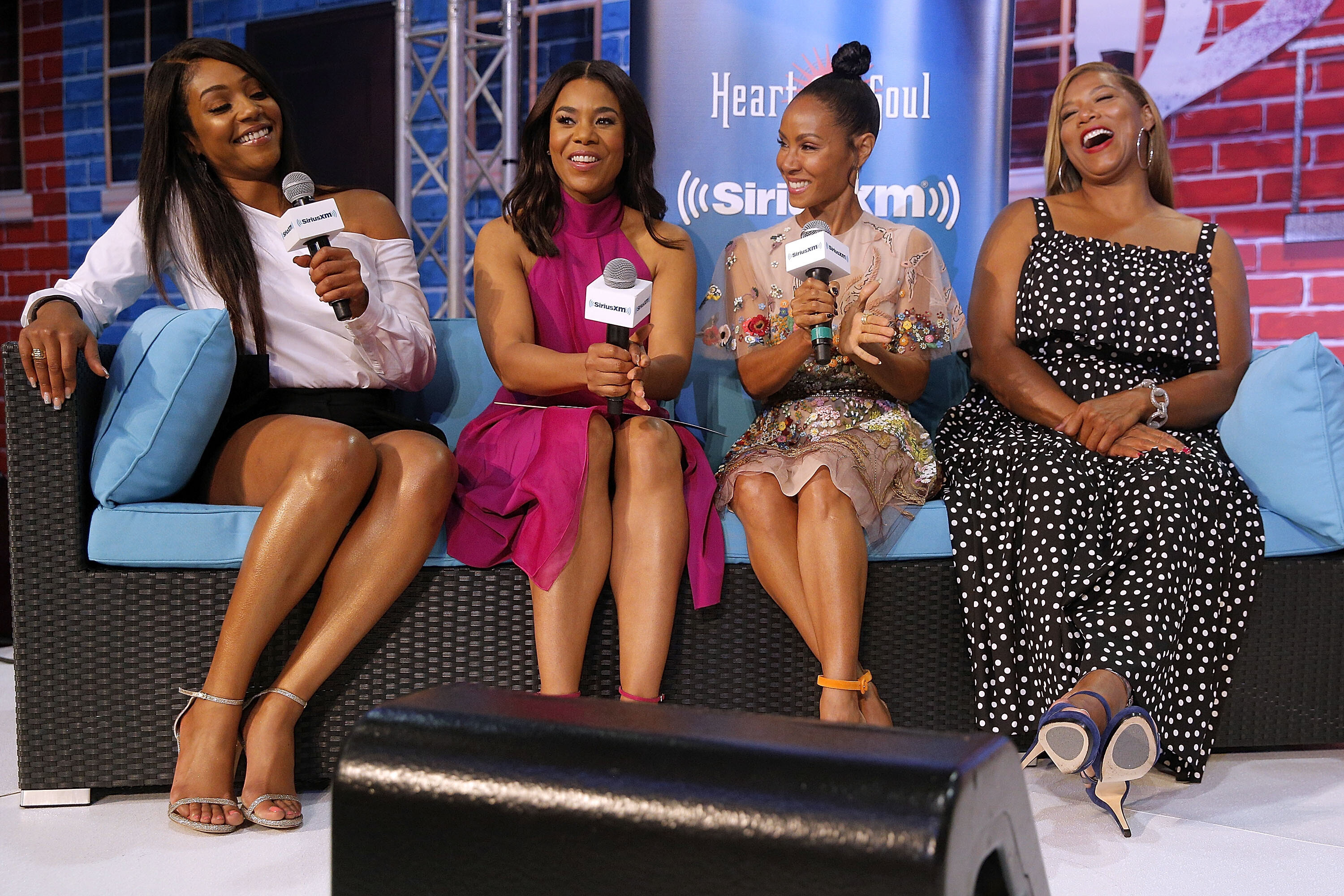 According to Haddish, the studio has been waiting for a script before moving forward, though she said Tracy Oliver, who co-wrote the original with “Black-ish” creator Kenya Barris, has a treatment ready to go. “Then it was like, ‘Oh, you guys want too much money,’” Haddish explained. (She said she made only $80,000 for “Girls Trip,” and she’s certainly worth more than that now.) So Latifah, Hall, Smith and Haddish decided during their two-hour Zoom conference to blaze ahead on their own. They agreed to meet again on Friday to start writing the script together.

“We might decide not to even make it ‘Girls Trip,’” Haddish said. “Maybe we’ll do a different story just in case no one wants to make ‘Girls Trip 2.’”

How “Self Made” handles Lelia’s sexuality.

Haddish’s sensibilities — modern, bawdy, loquacious — don’t exactly scream period piece, so her casting in “Self Made” may come as a surprise to some. Last year, the crime drama “The Kitchen” let her step into the world of 1970s gangsters, but that’s a whole different initiation. The early 1900s setting of “Self Made” necessitated straw hats, white gloves, conservative blouses and other accouterments. The worst of them: “those damn corsets.”

By design, Haddish was tasked with lending the series a progressive flair. Lelia Walker had three husbands during her lifetime, including John Robinson (played by J. Alphonse Nicholson), a hotel bellhop recruited to work in her mother’s factory. The younger Walker, who threw lavish parties that encouraged free sexual expression, was dubbed the “joy goddess of Harlem.” She wasn’t known to be queer herself, according to an NPR report from 2015, but Haddish said the show’s writers wanted to lean into the “rumor” that Lelia was bisexual. As the four episodes of the series progress, Lelia falls for a female photographer (Mouna Traoré) and escapes her unhappy marriage. The photographer is not based on a real person, but there’s reason to believe the plotline has some legitimacy.

“She was very welcoming and her last relationship after three failed marriages was with a woman, a good friend of hers for many years,” Madam Walker’s great-great-granddaughter, whose biography “On Her Own Ground” inspired the Netflix series, told Bustle in a recent interview. “I think this was her soul mate, but I have no documentation, only circumstantial evidence.” 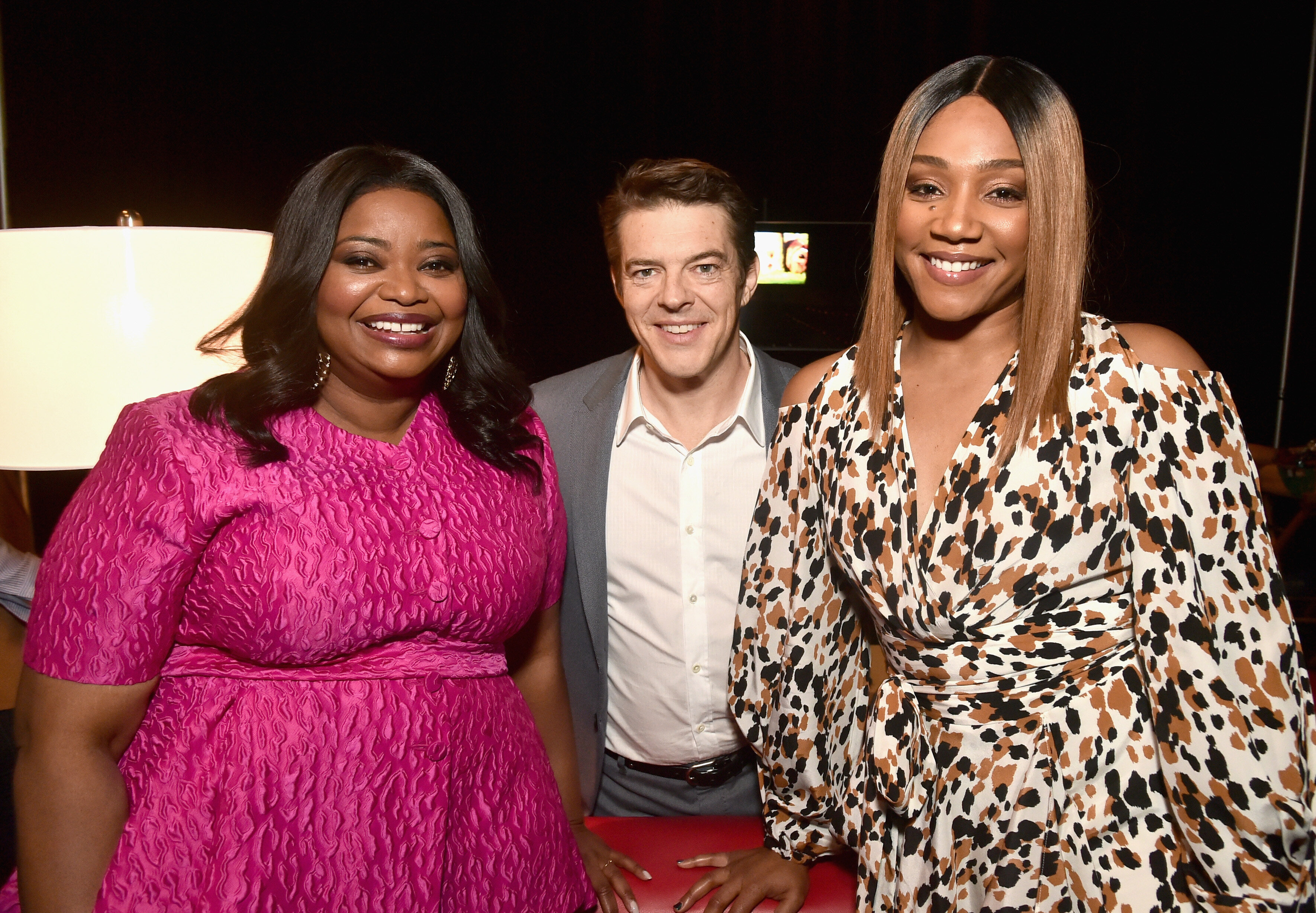 “Self Made” doesn’t assign a label to Lelia’s sexuality, though it’s clear she’s never been with a woman before. Haddish wishes the series had spent more time developing Lelia’s backstory and has since had early discussions about a possible second season focused on her character.

“There have been some talks with the showrunners about it,” she said, referring to Janine Sherman Barrois (“Claws”) and Elle Johnson (“Bosch”). “But nothing official yet, and I don’t believe anything till I hear from my lawyer.”

Before the quarantine, she hosted a potluck with Oscar Isaac and Willem Dafoe.

Haddish has a number of notable projects on the horizon, including comedies directed by Jerrod Carmicheal and Billy Crystal. I’m most excited to see her in “The Card Counter,” a gambling thriller directed by Paul Schrader, the headstrong writer of “Taxi Driver” and director of “American Gigolo” and “First Reformed.” Haddish plays a financier who backs a cardsharp (Oscar Isaac) and his revenge-happy poker partner (Willem Dafoe) as they travel from casino to casino.

The 73-year-old Schrader frequently posts bullish opinions about pop culture and current events on his Facebook page, and on March 18 he wrote that production on “The Card Counter” had been halted with only five days remaining.

“Myself, I would have shot through hellfire rain to complete the film,” Schrader said. “I’m old and asthmatic, what better way to die than on the job?”

Haddish was not surprised to learn that he’d rather perish from COVID-19 than leave his film incomplete. She loved working with Schrader but frequently had to ask him to reexplain what he wanted in terms a normal person could understand.

About a week before the Mississippi production shut down, Haddish hosted a potluck for her colleagues at the home she was renting. Dafoe had recently returned from Europe, and suddenly everyone was half-joking that he was about to give them all the coronavirus. As for whether Isaac and Dafoe are good cooks, well, don’t get her started.

“First of all, Oscar Isaac and Willem Dafoe didn’t bring a damn thing,” Haddish said. “Actually, Oscar brought a bag of potato chips. That was his contribution.”