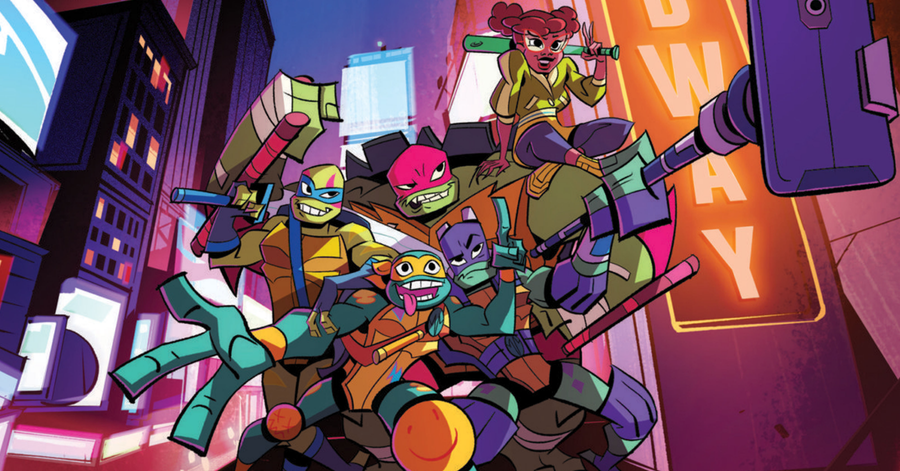 Did you know that for 22 out of the past 30 years, there has been a Teenage Mutant Ninja Turtles show of some sort on the air? Radical, right?

With a new iteration premiering later this month — Nickelodeon's Rise of the Teenage Mutant Ninja Turtles — we'd like to take a look back at how the franchise's constant revitalization has helped keep the heroes in a half-shell relevant all these years. Don't be surprised, friends; the Ninja Turtles have stayed righteous for longer than you've been stuck in a bunker, Kimmy Schmidt.

Since airing for the first time in December 1987, the Turtles have gone through some changes in their various incarnations, but the core concept has remained the same. No matter when the TMNT adventures take place, there are always four turtles, a rat sensei, mutagenic ooze, and pizza binding them all. But using that concept only as a jumping-off point, Teenage Mutant Ninja Turtles has frequently been retooled as something new and fresh.

The original animated series that ended in 1996 was followed by a live-action show (Ninja Turtles: The Next Mutation) in 1997. When the four reptilian brothers with serious martial arts skills returned in 2003, the adventures were once again animated, but with more of a mature outlook. That grittier interpretation eventually gave way to the highly-successful computer-generated TMNT on Nickelodeon in 2012, and now that show has lead to the new Rise of the Teenage Mutant Ninja Turtles, which leans heavily into the archetypes of its stars with a bold new style. Of course, all of these televised stories vary quite a bit from the foursome’s independent comic roots, whose vigilante adventures were recounted in stark black-and-white at Mirage Studios.

Like so many of the other animated properties of the ‘80s, the Turtles found tremendous success at the toy store, too. At that time in cartoon history, tie-in merchandise was just as much a signifier of success as the ratings on Saturday mornings. Whether it was TMNT, the all-new GI Joe, He-Man and the Masters of the Universe, or Jem and the Holograms, if it was a cartoon, there were licensed toys waiting to be purchased. If that cartoon was successful, there were also plenty of imitators out there hoping to capitalize on that kind of brand synergy.

TMNT clones like Street Sharks, Biker Mice From Mars, and Extreme Dinosaurs were all born of the same cloth, but none had the impact of TMNT. That the Ninja Turtles were the originators helped strengthen the bonds between fans and the shows they enjoyed, with Teenage Mutant Ninja Turtles one of the few brands out of that era to still earn shelf space at retail today. Like so many of those fondly remembered action figures, longtime fans still support new releases as part of the hobby instilled in them at a young, impressionable age.

Of course, it's hard to overstate the impact the Teenage Mutant Ninja Turtles had on our diets back in the '90s, too. The four dudes were always scarfing down slices of pizza in the cartoon, but it was made more tangible for audiences when the first movie came out and Michelangelo had Domino's delivered right to 122 1/8th West 47th St. Even though Domino's was featured prominently in the film, it was ultimately Pizza Hut who won out in the Pizza Wars of 1990. All the chain had to do was pony up $20 million to sponsor the Disney on Ice-esque "Coming Out of Their Shells" musical tour the Turtles went on after the movie's release. Pizza Hut also included a cassette tape of 10 songs from the tour with the purchase of every Personal Pan Pizza sold (for an additional $3.99) — but alas, it's not very good even with the rosiest of nostalgia goggles on.

Teenage Mutant Ninja Turtles is also one of the few television shows to sustain not just TV reimaginings, but distinct cinematic adaptations as well. The 1990 film was a huge hit with fans despite it going with a live-action approach (it finished No. 5 in U.S. box office that year), a departure from the vision and tone of the cartoon. Likewise, the traditionally animated 2003 show saw a CGI film released during its tenure that was wildly different in scope and style. Then in 2012, the new CGI animated series was such a hit that Paramount released two films that mixed more realistic CGI Turtles with live actors. That so many different iterations of these icons have not only existed but existed at the same time speaks volumes to the enduring and wide appeal the Ninja Turtles have.

Multiple areas of nostalgia (from cartoons to films to toys to comics) have continued to keep these fans around through all the different mutations of the Turtles, but it is one that has brought in new generations of fans too. Now that those ‘80s kids have families of their own, they can share the experience of the Turtles’ adventures with their kids in a number of formats, and it’s like they never skipped a beat. Playmates is even still releasing new TMNT action figures and playsets just like it was back when they first acquired the license from Mirage Studios.

After all these years, the Teenage Mutant Ninja Turtles are still totally awesome, and still drawing in audiences just like they did back in 1987. What's more, the Turtles remain relevant not just by their own accomplishments in television history, but by influencing a litany of other creators to recall fond memories these turtles inspired. Shows like the Unbreakable Kimmy Schmidt, which has called back to TMNT numerous times across three seasons; Big Bang Theory, which shares some creative DNA with the original cartoon; and even Gilmore Girls have all poked fun at Gang Green, not out of malice, but because the Ninja Turtles meant that much to the people working in Hollywood today.

It's not in spite of the radical changes to each iteration of the Ninja Turtles that they've been able to find success, but rather they have continued success because of that very reason. With so many versions of the Turtles cropping up every few years, there's never a bad time to jump on board the Party Wagon. The look and feel of their adventures may change, but the heart of the show remains the same as it was all those years ago. The four archetypal characters are incredibly easy to relate to at any age, and their different personalities make it easy to have a favorite. The wholesome themes of family and brotherhood make them instantly appealing, and the action helps keep the vibe of the show from ever getting too saccharine. The Teenage Mutant Ninja Turtles have just found the perfect combination of character and design to stay relevant, to stay beloved, and to stay forever enshrined in the hearts and minds of kids and kids at heart alike.

Rise of the Teenage Mutant Ninja Turtles premieres Sept. 17 on Nickelodeon, but you can catch the first five episodes early by streaming them on DIRECTV.