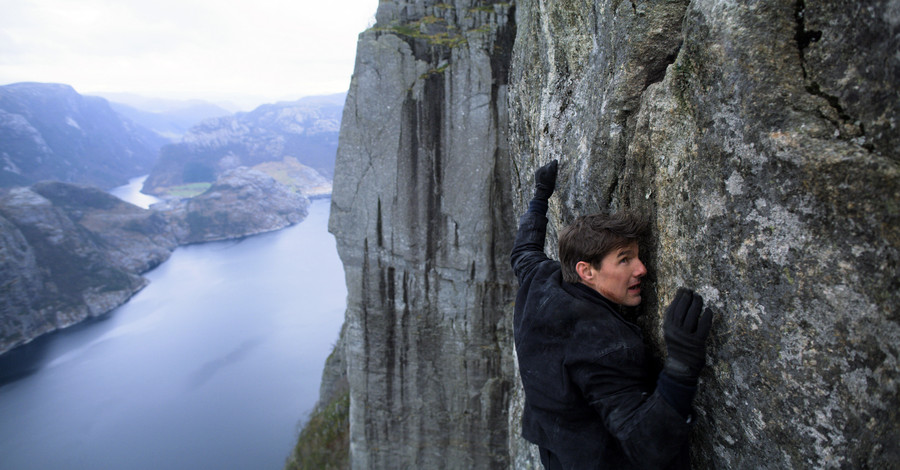 Tom Cruise’s Most Dangerous Stunts, from Top Gun to Fallout

Tom Cruise is famous for a lot of things — that killer Top Gun serenade, racking up billions in box office earnings, couch jumping. But perhaps his most impressive claim to fame is the fact that he almost always does his own stunt work.

At 56 years young, he is showing no signs of slowing down for Mission: Impossible — Fallout, where he actually broke his ankle during one stunt sequence and shut down production on the film for nearly eight weeks as he healed.

With that in mind, let's take a look at Cruise's most death-defying stunts over the years. He has frequently professed that as an actor, he owes it to the audience to try to do all of his stunts. So here's what he and his co-stars have had to say about the most dangerous ones.

At one point in this fighter pilot action flick, Cruise's character Maverick parachutes into the ocean after a malfunction causes him and his RIO (Radar Intercept Officer) to abandon their plane. Co-star Barry Tubb told the New York Post that when they filmed that sequence, "Cruise came as close to dying as anybody on a set I've ever seen."

(This sentiment gets repeated by a lot of his future co-stars.)

Tubb went on to say that while they were shooting, Cruise didn't realize his parachute was filling with water.

"Luckily one of the frogmen in the chopper saw his chute ballooning out," says Tubb. "He jumped in and cut Cruise loose right before he sank. They would have never found him. He would have been at the bottom of the ocean."

For his part, Cruise would much rather talk about how much he vomited when filming some of the flight scenes.

"We did all the training and now came the day that we got to fly ... we did nine-and-a-half Gs, very hard on my body ... in between takes, I just quickly leaned down to empty my guts into this bag," Cruise told Jimmy Kimmel in an interview.

Nowadays, Cruise takes every precaution when filming a dangerous stunt, but NASCAR vet Hut Stricklin says Cruise could have paid better attention to his advice during filming — that racecars are designed to turn left, not right.

"I guess he'd seen guys on TV squirming back and forth left and right," Stricklin told USA Today. "He turned to the left, the car turned left. But when he goes back to the right... "

The car spun out and crashed, destroying a $100,000 camera that had just been attached to the right side of the racecar.

Watch Cruise's driving in Days of Thunder on DIRECTV

The first MI film featured a lot of cool stunts, but the one that made Cruise the most nervous was the exploding fishtank scene.

"There was a scene where we blow up these tanks, huge fish tanks, thousand-gallon tanks. First, they're going to blow the tank [seven feet] behind me and then blow the tank overhead," Cruise explained to the LA Times. "I'm looking at how nervous everyone is ... It was a wall of water. So then the water rushes out and I've got to run faster than the water and chunks of glass are everywhere and I have to jump over a guy."

During the scene, Cruise bruised his ankle trying to stay ahead of the rushing water, but he didn't complain — because a stuntman actually gashed his leg on a chunk of glass shooting the same scene.

"I wasn't going to mention my ankle after seeing him. It was, 'I'm fine, I'm fine.'" said Cruise.

In this period piece, Cruise faces off with actor and real-life master swordsman Hiroyuki Sanada. This Japanese actor is most recently known for playing Shogun World outlaw Musashi in season two of Westworld, but 15 years ago, he was almost famous for being the man who beheaded Tom Cruise.

Talking to reporters when The Last Samurai was released (via Today), Sanada recalled, "Tom’s neck was right in front of me, and I tried to stop swinging my sword, but it was hard to control with one hand. The film crew watching from the side all screamed because they thought Tom’s head would fly off."

So even in a tightly choreographed fight scene with a sword expert, Cruise still risked life and limb to bring realism to his performance.

When promoting this psychological thriller, co-star Jamie Foxx told WENN (via Today) that he is another actor who almost accidentally ended Tom Cruise. They were filming a car crash scene and Foxx's car got a little more out of control than was intended.

"I hit the gas, the cab goes straight head-on into [Cruise’s] Mercedes and the Mercedes lifts off the ground and goes off the set," said Foxx, with Cruise adding, "I was hitting the roof. I was down on the ground."

Foxx then laughed and said, "They were so worried that I had killed my man. Can you imagine all that money bouncing around in the back seat?"

It was revealed on the DVD extras for this futuristic sci-fi film that Cruise actually wiped out on the custom-made motorcycle he rode around for a good portion of the movie. Luckily, he's a good rider and was able to fall off the bike safely.

In fact, the motorcycle designer said in a behind-the-scenes video that Cruise's "riding abilities" made their job very easy because they were able to make a fully-realized bike for an experienced rider.

Director Brad Bird told the New York Daily News that the stunt where Cruise was dangling off the side of Dubai's Burj Khalifa tower (the world's tallest building) was a constant "extended, hair-raising moment."

To be honest, it's even difficult to watch.

"It was one of the parts of the film planned as carefully as a D-Day invasion," said Bird.

And the film's stunt coordinator, Gregg Smrz, added that even with the 200+ hours of rehearsal they were still nervous that something could go wrong and Cruise would plunge to his death 1700 feet below.

Watch the scene on DIRECTV.

In what was definitely Cruise's most jaw-dropping stunt (possibly until Fallout), the actor was rigged to hang on to the side of an actual cargo jet as it took off into the air. He told Jimmy Fallon in an interview that it was "a little intense" and he did have a moment where he wondered if this was a good idea.

The risk factor was particularly high during take-off — of which they did eight takes — because any little thing that flew up and hit him on the runway could have done some serious damage.

"I got hit by a little stone ... We were going so fast — luckily it just hit my rib. I thought it broke my rib. I was just thinking thank God it didn't hit my face," Cruise told Fallon with a laugh.

He also revealed that for Rogue Nation, he trained with free divers to be able to hold his breath for six minutes so that they could get longer takes during the underwater sequence.

There are no signs that this action star is going to stop pushing the limits of stunt work anytime soon — and he made history with the upcoming Fallout by becoming the first actor to do a HALO jump on screen.

HALO stands for high altitude, low open; it's a way for military personnel to parachute into a country undetected. It is also, of course, very dangerous. There are risks of hypoxia and the bends and, in the case of filming it for a movie, the risk of a 200-mph, mid-air collision with a cameraman.

In a behind-the-scenes video, Cruise and the movie crew reveal that it took over 100 jumps to get it right. But eventually they did get it and no one was hurt. No, Cruise saved his on-set injury for that leap between buildings that left him with a broken ankle — but he didn't stop filming until the shot was complete, broken ankle and all.

As co-star Simon Pegg told Rachael Ray, "It's extraordinary. And he doesn't show any signs of letting up ... he does some crazy, crazy things and in this film, it goes to another level."

Mission: Impossible — Fallout is in theaters on July 27. Get caught up on all the previous films on DIRECTV.