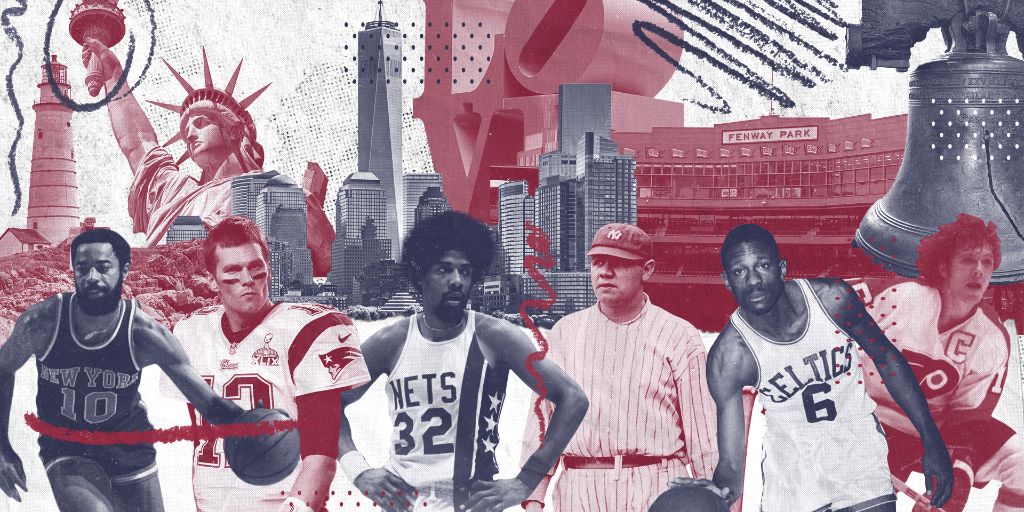 Giants vs. Eagles. Bill Russell vs. Wilt Chamberlain. The little regional derby known as Yankees vs. Red Sox. There may be no more rancorous rivalry, nor a more storied sports history of highlights and heartbreak, than the ones shared between Boston, New York and Philadelphia’s sports teams. And the best part is, the rivalry along the Eastern seaboard only seems to be getting more intense.

This weekend, the Red Sox and Yankees will face off once again after taking their historic rivalry across the pond to London, where the Yankees took both games, but both teams showed off a ton of power. The hosting Red Sox desperately need a good series to stay serious in the playoff race. But that’s just a little bit of seasoning on already rich history.

The names and faces may change, but the rivalry remains. Horford’s departure reminds some of when former Red Sox legend Johnny Damon cut off his Jesus Christ Superstar beard and went clean-shaven to join the hated Yankees. And while the NBA's recent player movement is unprecedented, team-swapping dates back to the beginning of sports history in all three cities. (Anybody remember the Curse of the Bambino? As in, THE GREAT BAMBINO?! Coming up shortly.)

Current manifestations aside, it's that shared history that's helped this three-way rivalry seep into the blood of Bostonians, New Yorkers, and Philadelphians. Let’s revisit some of the moments of malice, the historic hatred that brings this rivalry to life.

The Curse of the Bambino

With the recent Red Sox resurgence, its impact has been diminished, but neither the story of the Red Sox, nor of the cities of Boston and New York themselves, would be complete without Babe Ruth and "The Curse of the Bambino."

Depending on your age, you may have heard of Babe Ruth via the classic movie The Sandlot, or in your local candy aisle. Before all that, he was just regarded as the greatest baseball player of all time, a larger-than-life symbol of New York's cultural significance. But before he became a legend for the New York Yankees, he had won a World Series with the Boston Red Sox in 1918. Just over a year later, Ruth was sold to the Yankees, where he would become "The Great Bambino’" and set the single-season and all-time home run records wearing pinstripes. The Red Sox, so the Curse went, would never win another World Series.

(Note: the apocryphal story of Red Sox owner Harry Frazee selling Ruth to finance the production of something called No, No, Nanette! is a complete fabrication, meant to make selling BABE RUTH even more embarrassing than it already is.)

Never turned out to be 86 years. The Curse was broken in dramatic fashion, as the Sox won the 2004 World Series, making a historic comeback down 0-3 to their arch rivals along the way. They've since won it three more times after that, including in 2018.

But for those 86 years, the Curse presided over every matchup. While Sox fans suffered, the Yankees rang up most of their 27 championships and became the paragon of winning in all of sports. Even when the Red Sox had generational talents like Ted Williams or prime Roger Clemens (another all-timer who switched sides and later won big for New York), the Curse was too strong to be broken. Until it wasn't.

The rivalry has altered our perception of individual players, too. Take its poster boys for the last couple decades, Derek Jeter and David Ortiz. Both were great players. But would we care about either of them half as much if they didn't bring these two teams to glory, while vanquishing the other along the way?

While the Red Sox have the edge in the modern era, the Yankees in the record books, no amount of winning—or their opponents' suffering—will ever really placate either fan base. Yankees-Red Sox is arguably the biggest name pairing in all of American sports.

The rivalry between Bill Russell and Wilt Chamberlain ended with Chamberlain in a Los Angeles Lakers uniform, but it was characterized by their yearly battles as the stars for Boston and Philadelphia. In terms of team stats, it was a lopsided rivalry, with Russell’s team coming out on top most of the time. But the rivalry still has connective threads to both the cities and the sport of basketball.

Russell was known as a consummate team player who focused on defense and rebounding to will his team to victories, while Chamberlain’s gaudy stats made him an easy target as a player who put himself before the team. The argument between individual and team greatness has defined NBA basketball since it first tipped off, but Russell vs. Chamberlain  took the debate to a fever pitch as one of the dominant narratives of their era.

Russell left the rivalry as the greatest winner of his time and the greatest in NBA history, racking up 11 rings to help give the Boston Celtics the most championships in NBA history. Eventually, Chamberlain earned two championships, and a host of unfathomable records, to go along with a Hollywood career and legacy that's a fitting bookend to his basketball one.

Forever linked by their playoff battles, on their own they would have been the standard bearers of their time. They paved the way for Kareem Abdul-Jabbar, Bill Walton and the other big men that would define the NBA's present and much of its future. But together, they were the unstoppable force and the immovable object, forever linking the cities of Boston and Philadelphia in basketball conflict.

The mighty Patriots go down—to both New York and Philly

The New England Patriots have been the best franchise in football for nearly 20 uninterrupted years. Tom Brady and Bill Belichick secured their singular place in NFL history after winning their sixth Super Bowl last season, and most of the NFL has bowed before the Patriots colossus since their reign began. Everyone but the Eagles and the Giants.

Eli Manning and the New York Giants are famously 2-0 against the Brady-Belichick dynasty in the Super Bowl, including their miraculous 2008 Super Bowl win (shout out to David Tyree’s helmet catch) over the 18-0 Patriots, who were this close to officially becoming the greatest team of all time. Four years later, Manning & Co. turned the trick again, downing the Patriots behind a stifling defense. The two upsets represent perhaps the only times in American history that non-New Yorkers at large were rooting for a New York team.

Down in Philadelphia, after falling to the Patriots in the 2005 Super Bowl with a team featuring Donovan McNabb and Terrell Owens, the Eagles got their revenge by way of the Philly Special in 2018. Despite Brady's Super Bowl-record 505 passing yards, the Eagles and evocatively named backup quarterback Nick Foles (Nick Foles!) outplayed them on their way to the franchise’s first Super Bowl title.

It isn't just mythical, decade-spanning conflicts involving legendary teams. The individual moments between these cities form a punctuated equilibrium of malice. Take the Philadelphia Eagles and New York Giants. While they don’t share many great playoff moments as division rivals, they have combined to make a few special moments that will be seared in fans' memories forever. That includes DeSean Jackson’s game-winning punt return, to be dubbed the Miracle at the Meadowlands.

On a December night at the Giants' home field, Jackson stood back to receive a punt with 14 seconds left. After fumbling the ball, Jackson took it all the way back for a touchdown to beat the Giants and help the Eagles qualify for the postseason. While they would eventually bow out in the postseason to the Green Bay Packers, Eagles fans don't care. They got to stick it to the Giants.

Like Jackson's punt return, Paul Pierce's dagger wasn’t all that consequential in the long run, but it sure was cool.

In December of 2010, newly signed big man Amar’e Stoudemire and his former Phoenix Suns coach Mike D’Antoni finally had Madison Square Garden rocking again. They were winners of eight straight games, heading into a nationally televised home game against the Boston Celtics, who were once again a favorite to win the NBA Championship after injuries had hurt their chances at a repeat the year before.

With seconds to go, tied at 116-all, Pierce hit a midrange step back over Stoudemire to ice the game. What happened next was almost as memorable: Nate Robinson tried to chest bump Pierce but missed, falling into a tuck-and-roll before leaping up in excitement.

It's the kind of jubilation you don’t usually see in a mid-December game, and, given the state of the Knicks, is probably the most memorable basketball moment between Boston and New York in a while. But the kind of ill will these three cities have built up over time is why it's worth remembering at all.