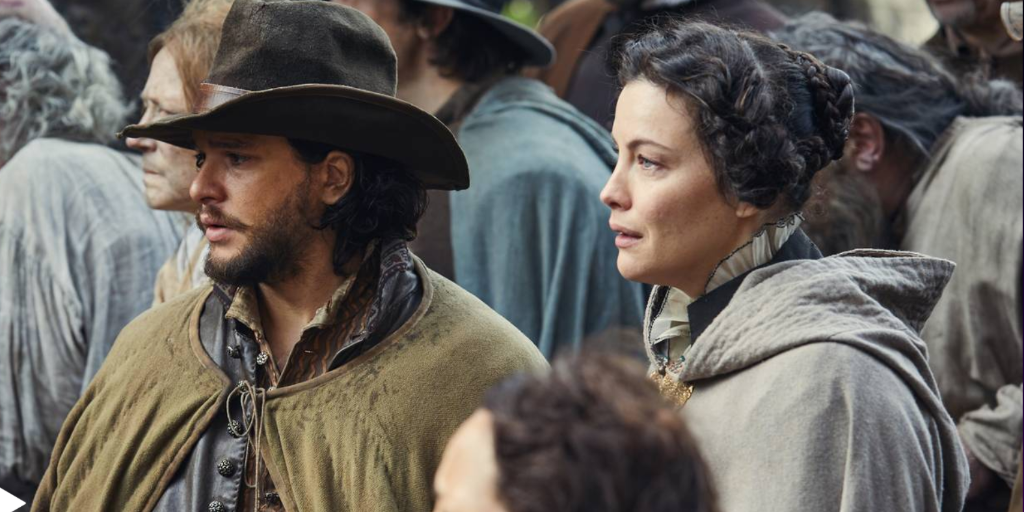 Turning Points in Time: TV Any History Buff Will Love

Take a walk through time with these extraordinary historical series and miniseries, streaming now on HBO Max!

What: Following the ancient civilization’s transition from Republic to Empire, “Rome” tells the story of two common soldiers caught in the midst of monumental historical events. With a cast of key characters based on real people like Mark Antony (James Purefoy), Julius Caesar (Ciarán Hinds), Brutus (Tobias Menzies), and many others, the series spans the rise and fall of Caesar and the society around him.

What: This two-part miniseries focuses on the second half of Elizabeth I’s 45-year reign, telling her tale through the lens of her relationships with the Earl of Leicester and the Earl of Essex. As the story unfolds, we watch as her ties to these two men impact her heart as well as the fate of the country, amid battles, executions, and the struggle for power.

What: A miniseries in three parts, “Gunpowder” tells the story of a failed assassination attempt on King James I, known as The Gunpowder Plot of 1605. The show starts with the turbulent years leading up to the event, which was led by Robert Catesby — played by Kit Harington of Game of Thrones fame, who, interestingly enough, happens to be a direct descendent of Catesby in real life.

What: Last year, Dame Helen Mirren returned to HBO once again as Catherine the Great in this four-part miniseries that chronicles her reign of Russia from 1764 until her death. We look on as she rules the empire with an iron first and carefully crafted relationships with her strategic allies and love interests. “The crown sits easily on Mirren,” TV Insider asserts, “who can be bossy, seductive, vindictive, and girlish at will.” Reason enough to watch.

Where: Boston and the British Colonies, during and after the Revolutionary War

What: Winner of four Golden Globes and 13 Emmy awards — more than any other miniseries in history — “John Adams” covers the first 50 years of the United States of America, from the Boston Massacre to the Declaration of Independence, the Revolutionary War, and Adams’ historic presidency. Brought to life by stellar performances from Giamatti, Linney, and the rest of the cast, critics hailed the show “a triumph” and “quite simply, as good as TV gets.”

What: Hailed by Rolling Stone and many others as one of the greatest TV shows of all time, “Deadwood” centers on life in the Old West: the town’s then-new gold-mining camp, saloon, and a brothel, among other small businesses, and its many colorful citizens — real and fictional. Writer David Milch notably used newspapers and diaries from true Deadwood residents of the 1870s to create the look, feel, and voice of the show.

When: World War I

What: “Parade’s End” is a four-part miniseries based on novels of the same name by Ford Madox Ford. The story follows the fictional Christopher Tietjens, an aristocratic statistician who finds himself swept up in the rapidly-changing world around him, from his own unpredictable marriage and personal relationships to the looming Great War and all its terrible repercussions.

The Plot Against America

What: Based on Philip Roth’s novel of the same name, “The Plot Against America” is an alternate history of the U.S. in which a xenophobic populist leader comes to power and turns the country into a fascist state. The six-part miniseries explores the rise of hate and anti-Semitism amid a society that by turns welcomes, tolerates, doesn’t understand or simply turns a blind eye to it — and what becomes of the nation when that happens.

Where: Camp Toccoa, Georgia and across Europe

What: Produced by Tom Hanks and Stephen Spielberg — who also brought us “Saving Private Ryan” — this 10-part nonfiction book adaptation follows a group of paratroopers known as Easy Company as they train at Camp Toccoa, Georgia before shipping out to Normandy and eventually capturing Hitler’s infamous Eagle’s Nest in southeast Germany.

Where: Australia, Japan, and the Pacific Islands

What: A companion piece to “Band of Brothers,” “The Pacific” turns its eye to the U.S. Marine Corps’s activity in the Pacific Islands and the numerous battles that occurred there on land and at sea, including those of Guadalcanal, Cape Gloucester, Peleliu, and Okinawa. The series is based on memoirs by its real-life protagonists Eugene Sledge and Robert Leckie.

What: Winner of last year’s Golden Globe for Best Miniseries, “Chernobyl” tells the story of 1986’s nuclear plant disaster and the rescue and clean up efforts that were to follow. While meticulously researched, the show does take some creative liberties; still, it maintains the utmost respect for the individuals affected, and for the history surrounding these tragic events.