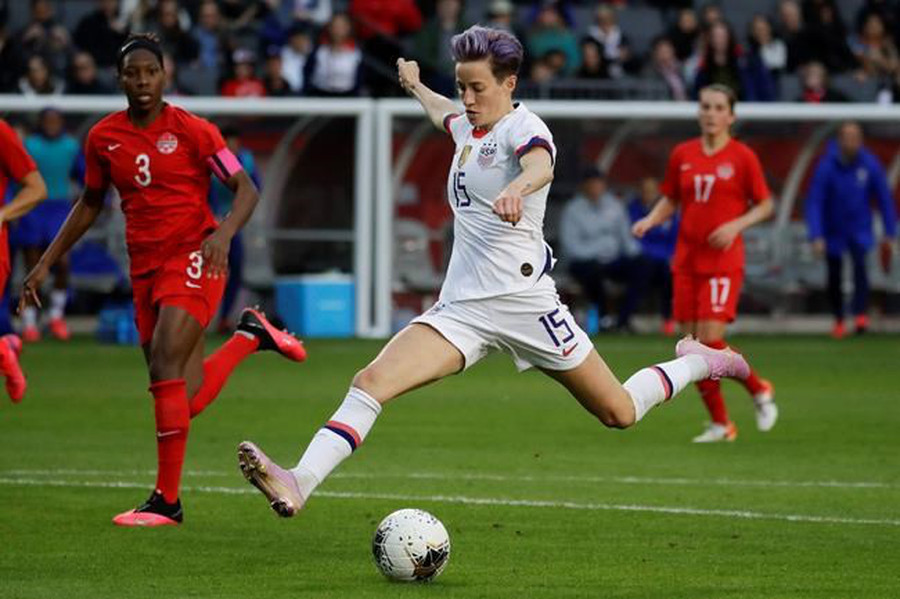 Canada faded as the game wore on and the breakthrough came in the 60th minute after Jayde Riviere's attempted clearance went to Williams, who hammered a shot high into the far corner. Horan made it 2-0 in the 71st minute, using a neat touch to beat two defenders and then put the ball in the corner.

With Canada pressing for a goal, substitute Rapinoe went in alone in the 87th minute and beat Stephanie Labbe.

"We definitely pushed for 60 minutes and we can be proud of that performance, but we will need to take care of those small errors we made," said Canada coach Kenneth Heiner-Moller.

"When we play anyone in the world, we know we have a chance to win because that is how good our team is, but we also know that those small things can have a big impact. We need to be ready to take care of those small things and continue the path we are on towards the Olympic Games."

The two North American rivals have met 60 times in all competitions, with the U.S. holding a 50-3-7 advantage over Canada.

Canada has not beaten the U.S. since the 2001 Algarve Cup when Charmaine Hooper scored twice and Christine Sinclair once in a 3-0 win. The Canadian women have gone 0-29-6 against the Americans since, but have tied two of the last six meetings.

Eighth-ranked Canada has now finished runner-up to the U.S. at the last four CONCACAF Olympic qualifying tournaments. The top-ranked Americans have dominated the event over the years, compiling a 23-0-1 record while outscoring the opposition 122-3.

"We have a great front line, we have a great midfield. The defenders were doing their job in the first half, so it was our turn to get the job done in the second half," said Williams.

Bragging rights were all that was on the line Sunday at Dignity Health Sports Park. Canada and the U.S. had qualified for the Olympics with semifinal wins Friday over Costa Rica and Mexico, respectively.

The two North American rivals arrived in the final with 4-0-0 tournament records. Neither had conceded a goal.

Canadian centre back Kadeisha Buchanan, a 24-year-old who plays in France for Lyon, captained the team in honour of her 100th cap.

While the World Cup champion Americans dominated possession early, the Canadians came on as the half wore on. The Canadians loaded up on defence, dropping five into the backline when the Americans had the ball.

Christen Press came close for the Americans in the 33rd minute when her swerving rocket from well outside the penalty box banged off the crossbar. Canada's best chance of the half came in the 38th minute when an onrushing Alyssa Naeher stopped Sinclair from in close.

Press came close again late in the half when, after a poor clearance, she saw Labbe off her line. But her attempted chip was too high. Another Press shot deflected wide soon after.

"I actually don't think they did too much to adjust. We made three individual mistakes, and gave them three goals," said Sinclair. "I thought we played a pretty even first half, obviously they dominated possession. But against a team like that, you can't give them goals, and we did that tonight."

The Americans had several good scoring chances in the second half.

Labbe stopped Williams in the 48th minute. And Sophie Schmidt made a big challenge to deny an American shot in the 54th.

The Canadian women won bronze at the last two Olympics and exited in the quarterfinals in 2008 in Beijing. Canada failed to qualify for the 2004 Games, beaten by Mexico in qualifying.

The Canadian women missed out on the 1996 and 2000 Games, when the U.S. was the lone CONCACAF representative in the eight-team field.

Brazil, Britain, Canada, the Netherlands, New Zealand, Sweden and the U.S. have already qualified for the Tokyo Olympics, joining host Japan in the 12-country field.

Seven Asian teams are still in the running for Tokyo with two to advance from Australia, China, Chinese Taipei, Myanmar, South Korea, Thailand and Vietnam.

Cameroon and Zambia face off in an African home-and-away series in March with the winner qualifying for Tokyo. The loser will meet Chile in an intercontinental playoff in April to see who joins them.

This report by The Canadian Press was first published Feb. 9, 2020.