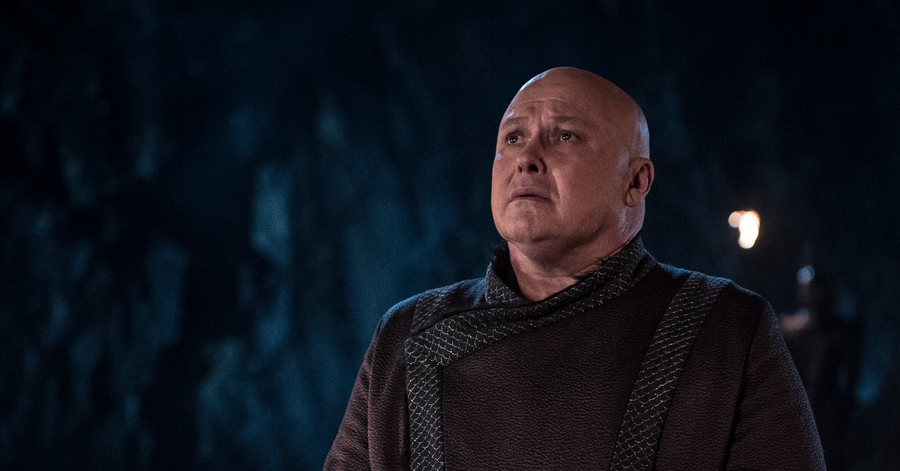 Valar Morghulis: The Bells Toll For Them

Well, that escalated quickly. While we all process "The Bells," let's reflect on who we lost in the penultimate episode of Game of Thrones.

If you ever betray me, I’ll burn you alive. - Daenerys Targaryen, S7E2, “Stormborn”

I have to die in this strange country. Just like you. - Melisandre, S7E3, “The Queen's Justice”

They did warn you, dear Spider. Lord Varys, Game of Thrones’ resident Master of Whispers, proved that prophecy may not always come true, but death threats often do. After two-plus seasons pledging his loyalty to Queen Daenerys, he abruptly turned heel to back Jon Snow as Westeros’ rightful ruler, and the bill for his subterfuge came due when Tyrion caught the two of them speaking on the shores of Dragonstone.

Varys was always a bit of an enigma, with his claims of “for the realm” a convenient rationale for almost all his actions. Whatever his motivations, he played the game of thrones expertly, rising from Essosi street rat and pickpocket to royal aide and Small Council member. In earlier seasons, he battled the late Petyr Baelish for the title of Schemer Supreme, and after reuniting with his old pal Tyrion Lannister, was instrumental in securing alliances with Dorne and the Reach for Daenerys.

Things were going about as smoothly for Varys as they can on this show—he survived the Winterfell crypts, for the Stranger’s sake—until he got hold of his favorite thing on earth: a big, juicy secret. The truth of Jon Snow’s parentage, delivered via Tyrion via Sansa via Jon himself, caused Varys to question his long-held allegiance. Maybe the pragmatic, solemn Northerner that united the living against the dead was more fit to rule than a queen who (quite understandably) got a little ticked off when her best friend (Missandei), her longest-serving advisor (Jorah Mormont), half her army, and one of her children all died in the last 180 minutes of television.

After she learned of Varys' betrayal, Dany made good on her promise. But while the execution was brutal, it wasn’t unfair. (Seven hells, Varys’ fave Jon has executed more traitors with a single swing of Longclaw.) But that dracarys was a portent of more to come. Varys was right about Daenerys' worst natures.

Didn’t this guy seem like the luckiest man to ever sail the Narrow Sea? First, he murdered his older brother Balon to usurp the Salt Throne as king of the Iron Islands—despite his niece Yara and nephew Theon both having better claims. Then, his black-sailed Iron Fleet decimated Daenerys’ allies, and he single-handedly erased half of Dorne’s ruling Sand syndicate. That earned him the attention, if not yet the affection, of queen Cersei Lannister. He managed to flee the continent and avoid the Army of the Dead entirely, earning more royal esteem by ferrying the Golden Company to King’s Landing. Eventually, his Jack Sparrow by way of Alice Cooper charm wore Cersei down—she even had him thinking he was the father of a prince-to-be. And to top it all off, he snuck up on the Targaryen armada (again!) and displayed what must be the most uncanny ballista accuracy in the history of projectile weaponry, killing Dany’s dragon Rhaegal with three impeccably placed scorpion bolts.

If only he’d completed his rockstar look with a pair of sunglasses. Daenerys took a page out of her ancestor Aegon the Conqueror’s book, using the sun as cover for a Drogon dive bomb, and annihilated Euron’s fleet. Euron jumped overboard and swam to shore where he met up with one Jaime Lannister, desperately seeking a route to the Red Keep. A bloody brawl ensued, and while, Euron got in his licks, Jaime drove a sword through his belly and limped off to find Cersei. Euron died as he lived, boasting of his conquests with a wild-eyed grin on his face.

Betrayed by his own creation...where have we heard that before? Oh, that's right: every time someone tries to create an undead killing machine.

The disgraced ex-maester found his way into the Lannisters' service thanks to a talent for unusual medical procedures. He saved Jaime Lannister's life after his maiming and slowly climbed the ladder within Cersei's regime to become her Master of Whispers, Hand of the Queen, personal physician, and weapons designer. He helped engineer Cersei's shocking, wildfire-powered coup in Season 6, and the scorpions that took out Rhaegal were his design. Morality aside, he was one of the most capable Hands we've seen.

But the Children of the Forest could've told Qyburn his curiosity might end up getting him, oh, slammed into a wall and thrown down a staircase by the undead Mountain. After he performed some dark sorcery to prevent Gregor Clegane from succumbing to Oberyn Martell's manticore venom-tipped spear, Qyburn appeared to have created the ultimate weapon: unstoppable, unflinching, and fully loyal. But, in undeath as he was in life, Gregor Clegane was nothing but a mad dog. He tossed Qyburn aside like a rag doll once his brother Sandor entered the picture, setting up...

Sandor “The Hound” Clegane was, and wasn’t, among the greatest knights ever to walk the Seven Kingdoms. For starters, he never accepted the title Ser like his onetime foe Brienne of Tarth (literally an un-knightly thing to do). But he served in the Kingsguard to King Joffrey (knightly, sort of). He protected the weak (Sansa Stark; very knightly), but rode them down, too (Arya Stark's friend Mycah; not knightly). He robbed a poor farmer who offered him shelter (decidedly non-knightly), but he later returned to lay that same farmer's bones to rest (fairly knightly). He eventually told Joffrey how he really felt about the whole king-guarding thing, and threatened to murder a crew of Lannister soldiers over a couple of roast chickens (no net knightliness score; that's all just really funny).

The Hound's road trip adventures with Arya Stark were a highlight of the series: an odd couple wandering the countryside both chasing and evading death, always a hair from turning their worse impulses on each other. When Arya left him for dead following a brutal tilt with Brienne, Sandor made an unexpected recovery thanks to a traveling preacher. The brief dalliance with religion gave him a sense of inner peace for the first time in forever. This being Westeros, that quickly shattered when a few rogue members of the Brotherhood Without Banners massacred the camp that had taken Sandor in.

While the incident meant the Hound and his ax were back in the picture, it wasn't all bad: it reunited Clegane with Beric Dondarrion. Granted, he'd killed Beric in a trial by combat once upon a time, but what's a death amongst frenemies? Sandor took up with Dondarrion and Thoros of Myr, and made their way to fight alongside Jon Snow and his assembled forces in the war against the undead. No one can say for sure what drove Clegane north. It wasn't his love for his fellow man. It wasn't a karmic payback for all the death he'd inflicted; the Hound was never apologetic over that part of his past. We do know what drove him back south again: revenge.

Perhaps Sandor rejected a knighthood because he figured if his evil older brother Gregor got one, what could it be worth? As a boy, the future Mountain that Rides pressed Sandor's face into a fire for the grievous offense of playing with his toy, causing the younger Clegane's scarred appearance, giving him lifelong pyrophobia, and igniting sibling hatred to rival their Lannister liege lords'.

That was arguably the kindest thing he ever did. The Mountain That Rides earned a reputation as Tywin Lannister's mad dog as a young man, murdering the entire family of the man who knighted him—Dany's older brother Rhaegar. He led a torture program at Harrenhal, and literally crushed Prince Oberyn Martell in a trial by combat. He even slaughtered his own horse when it caused him to lose a joust to Loras Tyrell.

After dishing out so much death, he conquered it, in a way. His duel with Oberyn was no one-sided affair, and left the Mountain dying in agony. But ex-maester Qyburn worked his dark magic, reanimating Ser Gregor as a silent but sentient zombie solider, ready to do Cersei's bidding. Un-death did little to change him, and as one of his final acts, he beheaded Missandei atop of the ramparts of King's Landing.

So basically, Gregor got  who was coming to him when Sandor returned to King's Landing. At the end of Season 7, Sandor looked his undead brother right in his lifeless eyes and spoke one of fans' most wished-for events into existence. And their duel did not disappoint. Sandor made his way to the Red Keep with revenge on his mind, hopelessly overmatched against his undead brother, but with nothing more to lose. He even let Cersei stroll right on by, A brutal duel on a stairway to hell saw Gregor take a sword in the belly and a dagger just about everywhere else before he nearly crushed Sandor's skull just like he did Oberyn's. The younger Clegane finally got a proper angle, burying a dagger right in Gregor's left eye...

...but that still didn't do the trick. Summoning his last ounce of strength, Sandor tackled the Mountain through a wall and into the fire below, sending both members of House Clegane careening from the top of the Red Keep. The only thing stronger than the Hound's fear of fire was his hatred for his brother. Rest in peace, Sandor. Burn in seven hells, Gregor.

What, you thought we forgot? They came into this world together, and they went out the same way. For a pair so lovable and loathable, we had to give them their own eulogy.

There's only one episode of Thrones left, but something tells us there will be one more installment of "Valar Morghulis" too. Tune in Sunday, May 19 to see the series' unforgettable conclusion on HBO via DIRECTV.

The Covert Feminism of “The Girlfriend Experience”

In media, the act of selling oneself is oftentimes treated ...