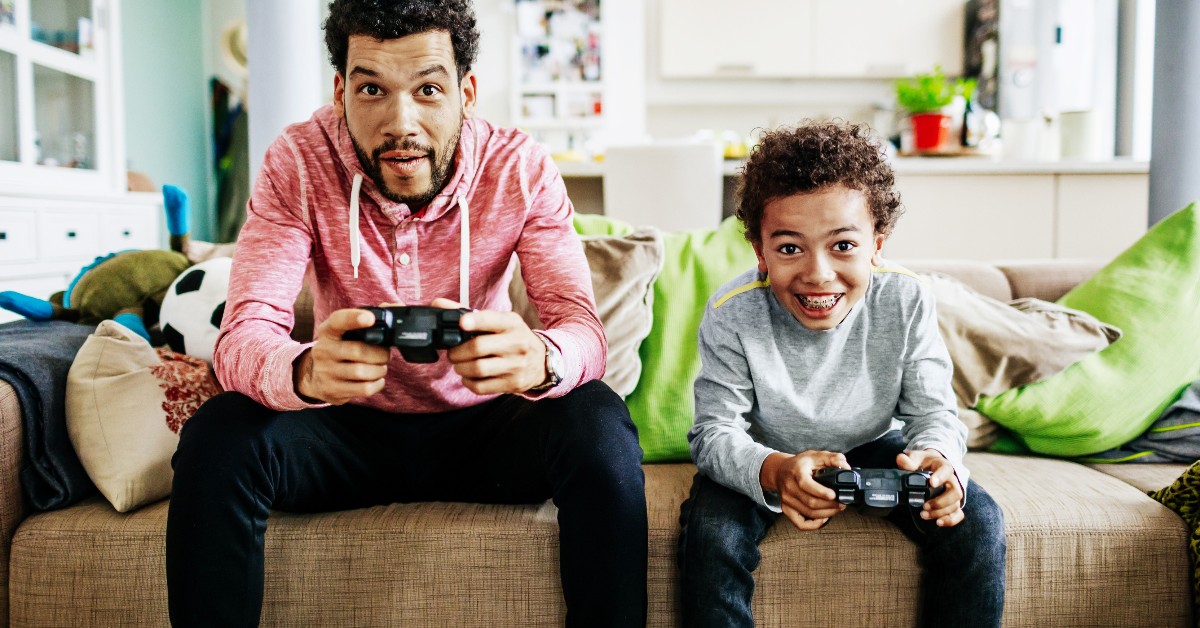 Video games have been a part of home life since the Nintendo Entertainment System became ubiquitous in the 1980s. Generation upon generation has grown up playing “Mario Bros.” or, more recently, “Call of Duty.”

But things change. You get older. You have kids. And although a video gaming hobby can survive and thrive in fatherhood, you might have to find something that works best for you and your family.

If you find the days of playing “Grand Theft Auto” all night becoming more and more scarce, that doesn’t mean the party’s over, but it's probably about time you start thinking about the games both you and your kids can play. In fact, there are whole YouTube channels dedicated to fathers and sons playing video games after all.

So quit honking your car horn at the pretty lady on GTA, and hand your kid a controller. Here’s our guide to having fun with a little one on the couch next to you.

There are hundreds, perhaps thousands, of video games geared at young children. "Peggle 2" is among the best because the gameplay is simple. It’s kind of like pinball (such an analog reference!) with players trying to score as many points with a limited number of balls to fire into the arena. "Peggle 2" comes with an age rating of 8 years old, but you could probably find a 5-year-old playing right now. It’s easy to explain, even if the scoring can get complicated.

It’s probably unnecessary to tell you all about a game with 120 million active players a month. But some people haven’t heard of The Beatles, so let’s hit the high points just to say we did it.

"Minecraft" players design and build their own worlds. In survival mode, players mine for resources, build shelters, find food, and craft things to survive attacks from computer-generated bad guys. In creative mode, players have all the tools and resources they need to build whatever they want. Players have taken that freedom and generated beautiful buildings, drawing from both fiction and nonfiction. Kids as young as 5 years old can figure out how to dig this game; maybe that explains all the users.

"Mario Kart" is an obvious favorite for kids because it has familiar faces and the controls are simple. And really, anything from the Mario Bros. world is appropriate for kids, but "Mario Kart" might be the easiest to understand for the littlest kids.

It’s a race, kids. Go nuts. "Mario Kart" is only on Nintendo game systems. But in "Team Sonic Racing," players compete to win races, so that might be the way to go if you want to work on cooperation skills. You can share speed boosts and power-ups to push each other over the line faster. Of course, "Mario Kart" famously tries to keep all races close, so everybody should have a shot at a win in the racing classic.

If you are a parent of an older kid, just pick up the controller and join in "FIFA" or "Madden football." But for younger kids, “Rocket League” is a great way to get into sports gaming.

The point of the game is simple: Use your car to knock the ball into the goal. Players have gas, brakes, and steering, so it’s not like you’re fine-tuning a “Gran Turismo” racing machine here.

You can play games just for fun against people on the internet, or you can just practice and play with each other. When you start feeling like you’re an expert, try the ranked competition and be prepared to learn a thing or two (it’s not as simple as meets the eye).

Easily the most expensive option here, “Rock Band” gives you the option to get the whole family involved. You’ll need at least a microphone and a guitar, or maybe a guitar and a bass or maybe just two guitars to get rolling. You won’t be thinking about the price tag when your kid nails the intro to “Stairway to Heaven.” And with thousands of songs, odds are low you get stuck playing the same Tom Petty song over and over again (unless your kid really loves “Last Dance With Mary Jane”). The difficulty can be kept low enough that young kids will get into it, and “Rock Band” is a perfect gateway game for kids (or families) that don’t think they like video games.

You’ll need a little extra tech to play any of the “Just Dance” games, but you can save money by purchasing older versions of the game, which get down to around $10 and still have hundreds of songs. It's perfect for kids with more energy than coordination or kids who think they hate video games. It’s not a game! It’s just dancing! How hard can it be?

Gone are the days of shooting at random teens online in “Call of Duty.” You’re in couch co-op territory. Some games don’t even allow you to play multiplayer games with somebody next to you on the couch. You can avoid that by visiting Co-Optimus, the one-stop shop for checking out co-op video games, with details about how many people can play together on a couch and whether the games are any good. And quality is important if you want your kids to get into the games. And don’t worry, “Grand Theft Auto” hasn’t put out a new game in nearly eight years; you have time to dance.