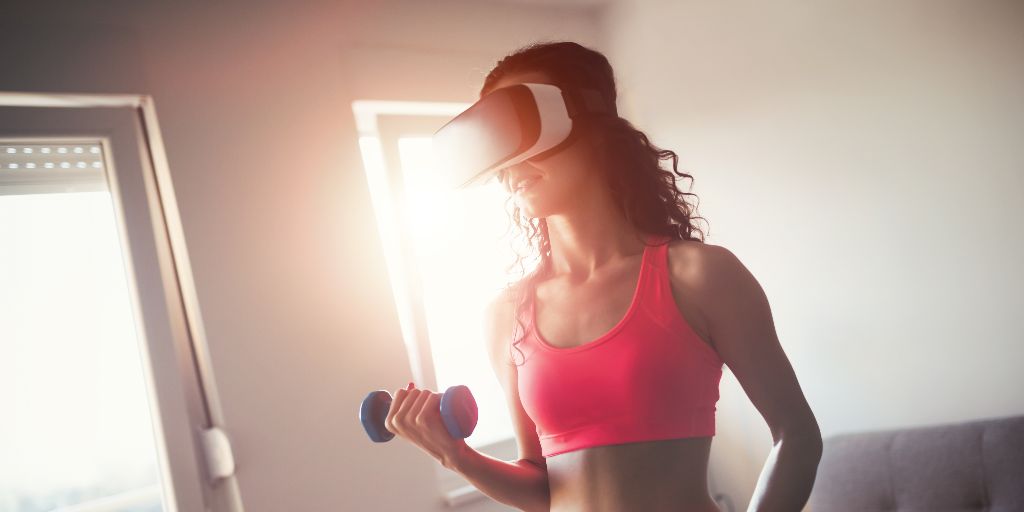 Last night I flew on a winged horse in a magical land, piloted a helicopter through a peril-filled river canyon, road a horse in an old West stampede, and blasted tanks in a desert landscape. Oh, and I burned a few hundred calories too, all from a stationary bike in my bedroom.

I barely noticed I was working out.

The game is VZfit by Virzoom, and you play it on Oculus Quest or Go. The VR headset shows you the gameplay, a sensor on the bike increases or decreases your speed based on how hard you pedal, you turn by leaning your head, and activate in-game features (or shoot the tank’s gun) with a little controller that you can attach to the bike’s handlebar.

It was a lot of fun.

And science says that when you’re having fun, you don’t notice that you’re exercising. There’s just too much going on to pay much attention.

Scientists phrase it a little differently, of course:

“We hypothesize that VR technology induces a higher perceptual load when compared to music and control conditions, which prevent exercise‐related interoceptive cues from entering focal awareness,” says a Brunel University study in the British Journal of Health Psychology.

Translation: you’re having too much fun to notice you’re working like a dog.

Most of us listen to music when working out to enjoy ourselves, pump ourselves up, and make the hard physical labor just a little bit easier. And it helps, but apparently not nearly as much as a full immersive virtual reality experience.

“Music by itself … added about 8% enjoyment,” Virzoom CEO Eric Malafeew told me in a recent TechFirst podcast, citing the Brunel University study. “But virtual reality, which they measured using Virzoom, added 26% enjoyment.”

For me the biggest part was the gameplay.

While in the chopper, I was focused on not getting shot down and hitting targets. In the tank, I was hunting enemy armored vehicles. As a gigantic Pegasus, I searched for and found gems, pots of gold, and more. But you don’t have to be a gamer type to enjoy VR with fitness. VZfit also offers an Explorer game, where you can ride “any of the 10 million miles of Google Street View.”

Malafeew knows a few things about mixing real and virtual worlds. He worked on Microsoft’s Kinect, a Ninento Wii-like device that incorporated your physical body into virtual games. He built dance games for the Wii, and he was the chief architect of Guitar Hero, which took the massive risk of creating a new controller for one single game, and saw a huge payoff. Malafeew also worked on the Mars Rover for NASA and military trainers.

It’s all kind of come together now in VZfit.

“We just thought: what would be things that you would want to do that could keep you peddling, if peddling was just your means of going forward, and leaning was your means of steering,” he told me. “Of course [we] have tanks and helicopters. But things nobody’s ever done, like ride a Pegasus and fly over a canyon, lasso a cowboy. So, those were the kinds of games we made at first and then we kind of cracked the nut of cycling around the world using Street View.”

That means there are literally millions of miles of roads you can virtually travel.

And while this seems like a perfect made-for-Coronavirus-times project, it’s actually been in the works for about five years. The first games were for the Oculus Rift, HTC Vive, and PlayStation VR. As an owner of a seldom-out-of-the-box PSVR, I can tell you that wires kill the experience.

So a year ago Malafeew started working on games for all-in-one headsets. They’re cheaper, they have no wires, they’re easier to use, and they set up almost instantly.

What you do need, of course, is a stationary bike. VZfit supplies a cadence sensor that knows how fast you’re pedaling, which impacts your speed in both the games and explore modes, and a small controller that you can pair to your Oculus Quest headset via Bluetooth. It’s definitely not a painless process, and wearing a VR headset is not an accelerant to checking web-based instructions, fiddling with your phone, and madly pressing buttons on the controller as you try to pair it, but once it’s done, it’s done.

Newer smart bikes with sensors will pair with your Oculus Quest and the game more automatically, Malafeew says.

The end result is that when you’ve got all the gear running, you can jump up on the bike, power up your Oculus Quest, and just have fun. More enjoyment, Malafeew says, translates to both longer and more frequent workouts.

“Our customers tell us that they don’t even realize they’ve gotten a workout,” he told me.

I’ve used virtual reality games in place of the gym before, but almost accidentally when playing Beat Saber. VZfit is a game designed to help you exercise, and it worked well.

One thing: you may need to limit your exposure if you get motion sickness in VR. I’m not too susceptible to it, but after 30 or 40 minutes in the more intense games, I wasn’t feeling great. VZfit does offer lower-intensity games as an option, and of course the Explore mode isn’t going to have you swinging your head about like a crazy person trying to see enemy tanks that are shooting at you.

So there’s lots of options if that becomes a concern.

One thing I wondered about out loud with Malafeew: how does this compare to Peleton?

“What we love to say about Peloton is you can upgrade it to VZfit for a quarter of the price, and if there’s people in their family who might not enjoy spin classes, they will love peddling a Pegasus and riding around the world,” he said.

Get the full transcript of our interview here.

This article was written by John Koetsier from Forbes and was legally licensed through the NewsCred publisher network. Please direct all licensing questions to legal@newscred.com.