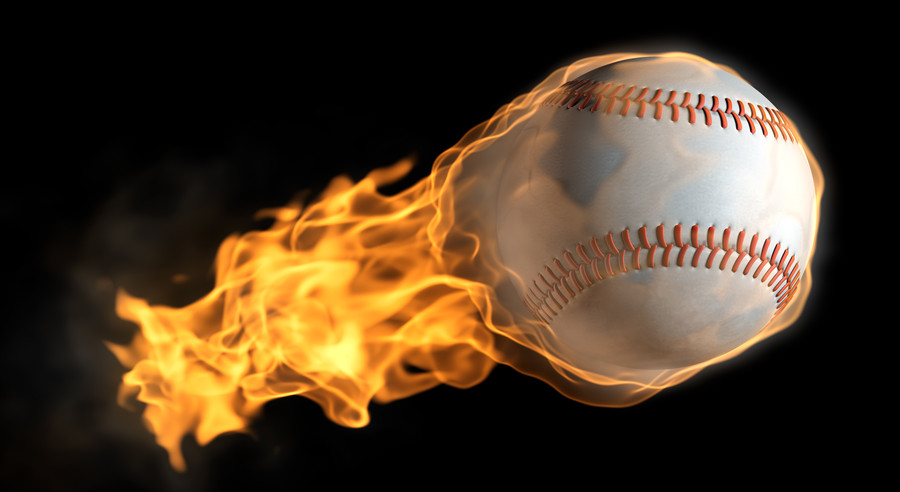 Way Back, Back, Back: The Unlikely Origin of Baseball’s Launch Angle Revolution

This five-part series will examine how swing biomechanics and the proliferation of technological tools are helping hitters. Part 1 explores the history of this field and the origin stories of a few key devices.

Baseball’s capital-letter Home Run Derby was held in Cleveland on Monday night, but the past few seasons—and 2019 especially—have felt like a daily derby, with league-wide home run rates soaring at unprecedented clips. A manufacturing change that reduces the ball’s drag might be the primary culprit, but the sport’s newfound obsession with launch angles and exit velocity can’t be ignored.

For most of the past decade, new technology and advanced data in baseball had favored pitchers, in part because they initiate the action whereas hitters can only react. Strikeouts have risen precipitously. Fastball velocity is getting faster. Breaking balls are breaking more. In recent years, however, the proliferation of new tools and devices—from bat sensors to virtual reality and wearables to radars—have shifted the pendulum back closer to equilibrium.

Hitters have more tools at their disposal than ever before, the technological boon allowing them to analyze and reinvent swing paths in a concerted, data-driven manner. But tracing how baseball got here starts with a team that’s no longer in existence. A decade before Billy Beane and the Oakland A’s inspired a best-selling book and Hollywood movie, there was another franchise practicing stats-driven methods that its general manager has since called “Moneyball 1.”

The cash-strapped Expos sought the aid of science over signing bonuses in coaching, too. They were the first to use motion-capture technology to assess the biomechanics of a hitter’s swing. Such tech was rudimentary a quarter-century ago: Players would wear some two dozen ping-pong ball markers from head to toe and hit off a tee in front of six cameras, with the footage later calibrated into a three-dimensional view.

The Expos conducted this groundbreaking work near their spring training facility in West Palm Beach, Fla., at the Good Samaritan Medical Center orthopedics lab. Dan Duquette, then the general manager, said the data helped hasten the advancement of prospects such as Cliff Floyd, Rondell White, and Shane Andrews.

RELATED: The Top Tech Storylines of the 2019 MLB Season

“We tried to look everywhere for an advantage, and the performance technology was one of the keys,” says Duquette, a 61-year-old baseball lifer who later became GM of the Red Sox and the Orioles. “Part of the value proposition is how quickly you can get a player who goes from the amateur draft to the major leagues, so we were trying to leverage the data to accelerate the process.”

The Expos assembled a bountiful group of 20-something stars who compiled MLB’s best record in 1994 before a player strike cut the season short. Ownership then insisted that Duquette’s successor, Kevin Malone, slash payroll. The talent dispersed and after a while the biomechanical study fizzled.

Swing mechanics, of course, weren’t necessarily new—they were just now being measured. Duquette points to the concepts espoused by The Science of Hitting, the 1968 book by Hall of Fame slugger and Korean War hero Ted Williams. “You can read what the Navy pilot wrote about it,” Duquette says, “and you tell me if he didn’t have a unique understanding of the swing path and the launch angle.”

Ted Williams, honing his swing path in this c. 1946 photo at Fenway Park, was the last major leaguer to hit .400 or better. The Splendid Splinter finished with a .407 average in 1953. (Getty Images)

This is a story about baseball, but it can’t be told without golf.

Two of baseball’s essential modern technologies, Blast Motion and K-Motion, were developed by Michael Bentley, the son of a PGA pro who set out on his own professional golf career in the 1980s, touring Asia, Australia, and the U.S. Always more of a mechanical player than his peers, Bentley responded to an ad in 1987 placed by Dr. Frank Jobe of Los Angeles Centinela Hospital, who was using high-speed video to study the biomechanics of a golf swing. (Jobe is best known for inventing Tommy John surgery.)

“As a player,” Bentley recalls thinking, “how do I tie in my ball flight and my performance into my body and the ground?”

Bentley grew up in the world of motocross, learning mechanics at a young age from his grandfather, an engineer. This objective, data-driven approach instilled at a young age would prompt Bentley, after the Centinela Hospital trial, to investigate optical tracking technology. At the time, however, test subjects had to be inside. An electromagnetic testing system was better, but that required wires. The genesis of K-Motion’s signature product—the K-Vest, a six-sensor harness—was to bring a wireless solution onto the course.

K-Motion is now one of the more popular devices in MLB, with more than a dozen teams using the technology that tracks the body’s motion during a swing: the movement and acceleration of the hips and torso, for instance. The Seattle Mariners even hired a specialist just to assist with its usage in the minor leagues.

Bentley, now 56 and living in Carlsbad, Calif., also helped develop Enso, a 3-D motion capture technology that measures golf shaft deflection, twist, and club head performance. (He now operates Paradigm Performance Group, a platform that trains coaches on the use of biomechanics technology.) The next evolution in the portability and accessibility of this data was to find a way to get data from golf clubs—or baseball bats—that synced automatically with video clips of a swing.

That work became Blast Motion, now the official bat sensor technology of MLB. “So Blast was,” Bentley says, “how do we miniaturize what we did at K-Vest, how do we get what we had at Enso, and bring those two worlds together?”

Baseball and golf swings generate force in similar ways. The innovative OnBase University coaching platform that has worked with more than a half-dozen MLB clubs was developed by Dr. Greg Rose, a co-founder of the Titleist Performance Institute, in conjunction with a number of coaches and trainers in and around baseball. OnBaseU is a coaching seminar designed to bring a holistic approach to player training. Its premise is that no athlete should have just one coach serving as a general practitioner. Instead, the medical, fitness, and coaching staffs should all collaborate to meet the specific needs of individuals.

TALKBACK: With all the advancements in swing technology, will we ever see another .400 hitter? Drop us a line and share your thoughts.

Similarly, the renowned American Sports Medicine Institute in Alabama has made great contributions to the body of knowledge around pitching mechanics because the institute focuses on injury prevention. It also took an early look at golf swings because that sport has a high incidence of back and arm ailments, says ASMI research director Glenn Fleisig.

One fellow studying under Fleisig in 1991-1992 was a biomedical engineer named Chris Welch, who served as ASMI’s golf research coordinator and specialized in swing patterns and ground-reaction forces. Welch then worked at the Biomotion Foundation with Dr. Frank Cook, who began evaluating the biomechanics of hitters on a few MLB teams but especially the Expos.

In November 1995, Welch and Cook co-authored a paper in the Journal of Orthopaedic & Sports Physical Therapy that aimed to “provide a foundation for the biomechanical study of hitting.” Their groundbreaking research utilized 3-D motion capture to study proper sequencing of the swing, and theirs was the first quantitative analysis of what has been called the kinematic sequence, kinetic linking, and segmental summation. Elite players create force in a similar manner, from the ground up through the bat. “Proper timing facilitates successively higher rotational velocities,” the study concluded.

“You get the combination of what I always refer to as both the physics and the physiology of sequencing,” says Welch, who now works with a half-dozen MLB organizations through his current venture, Zenolink.

Welch also started his own business in ’95, Human Performance Technologies, to conduct more clinical evaluations of hitters. “We were literally the only people doing it,” Welch says with a laugh. “I guess it was me, because I was basically a one-man show there.”

Welch and Rose began working together two years later after being introduced by a mutual friend—Greg Norman’s physical therapist, Pete Draovitch—and they applied the techniques back to golfers. (One of the golf pros assisting with the video collection: Bentley, who at the time was working at the Okemo Valley Golf Club in Ludlow, Vt.)

Tony Gwynn and Wade Boggs were masters at hitting balls to all fields because of their bat paths and kinetic linking. Gwynn, who died at 54 in 2014, has been memorialized—along with his iconic swing—outside the Padres’ stadium in San Diego. The two Hall of Famers won a combined 13 hitting titles. (Bill Wechter/Getty Images :: Rick Stewart/Getty Images)

Long before video and tech became common in baseball, players shared tips and advice based on happenstance observations. In 1989, Yankees catcher Don Slaught was in the midst of a slump when the team’s All-Star first baseman, Don Mattingly, asked him in the dugout, “Can’t you just hit an inside fastball and drive it up the middle or to the right side?”

“No,” Slaught replied, “I’m supposed to pull that.”

Slaught had always been taught, like most ballplayers at the time, to swing down on the ball—even on inside pitches. Doing so, however, means swinging across the downward trajectory of the pitch and potentially getting jammed or missing it altogether. Instead, a hitter should keep his front elbow above his hands and his hands above the barrel of the bat in order to swing through the same plane as the pitch. This allows for a greater margin of error, meaning the batter has more time to make contact and hit the ball to all fields.

Slaught retired from the majors in 1997 and joined his old high school coach in California, instructing younger players. Long before YouTube, he could only find old sequence photos of the game’s best hitters to show as examples. That led to the launch of RightView Pro, a video analysis platform. Slaught filmed MLB All-Stars from several angles to show successful hitting mechanics.

“My video is like, say, an X-ray of a swing,” Slaught says. “The technology is more like an MRI of a swing.”

This article was written by Joe Lemire from SportTechie and was legally licensed through the NewsCred publisher network. Please direct all licensing questions to legal@newscred.com.

Analysis: NFL has some changes to consider for future drafts

MLB Should Use Mics to Market Players and Broaden Its Audience

Major League Baseball has stumbled onto something brilliant.It gives its ...

Unspoiled by the incentive of flashy agents or lucrative contract ...

NHLers get a kick out of old broadcasts: ‘Hilarious how much the game’s changed’