Westeros Revisited: The Rains of Castamere

Tears for the Misdirect

There's no hiding it: this episode has a devastating ending. Devastating. But watching it back, I managed to keep my eyes open through my anticipatory tears long enough to appreciate all the misdirect moments that made the heartbreak that much more painful. Honestly, it's downright masterful how the first scene of Robb planning to attack Casterly Rock distracts us from his slight of the Freys. The focus on a strategy, a bold strategy that could cripple the Lannisters at that, sets the wheels in our heads turning and we can't help but buy into the promise of an epic battle. Also, it's super sweet to see Robb (Richard Madden) ask Cat's (Michelle Fairley) advice...but if only he'd learned to listen to his mother before he got married (ahem Westeros Revisited: Valar Morghulis ahem)! 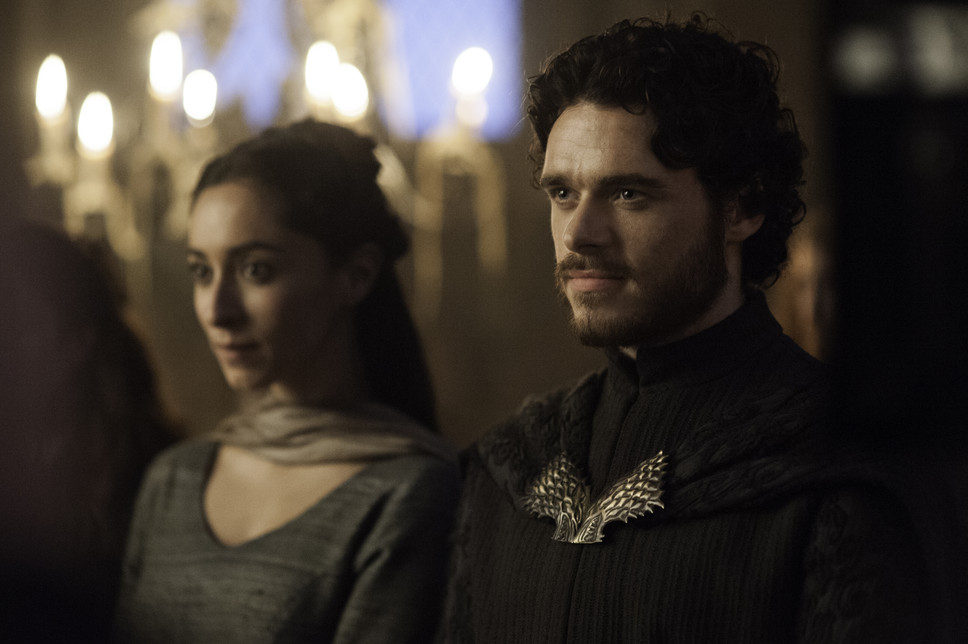 One more misdirect, though more subtle, centers around the laws of hospitality. While it was a bigger deal in the books (and, actually, in Ancient Greece), we get a brief glimpse into the unspoken pact that welcoming someone into your house brings them under your protection. When the Starks first arrive at The Twins, they ceremonially eat bread and salt - a custom that is supposed to bind the Freys to be hospitable. Not so much, it turns out. But anyone familiar with the custom was immediately put a little more at ease to see it on screen. The scene ends with Walder Frey (David Bradley) predicting, accurately but misleadingly, "The wine will flow red, and the music will play loud, and we'll put this mess behind us."

There's an interesting current of mercy running through this episode, considering it's one of the toughest for fans emotionally. Early on, we get two honorable Starks sparing the lives of the commonfolk as much as they can. First, Jon (Kit Harrington) tries to talk Tormund, Ygritte, and the rest of the wildlings out of killing the old man who breeds horses for the Night's Watch. This is a pretty classic case of Jon's noble blood betraying him: try as he may, he can't let himself watch this innocent man die. Along the theme of death as a friend and foe, Ygritte points out that "a spear through the heart's a better way to die than coughing up your last with no one but your horses to hear." Jon begs for mercy by sparing the man, Ygritte argues mercy is the quick death they can offer him. It echos the scene where Jon first meets (/captures) Ygritte and she asks him to strike straight and true.

Arya Stark (Maisie Williams) has not one, but two brushes with the concept of mercy in this episode. And both involve her frenemy the Hound (Rory McCann). When he knocks out the pig farmer to take his wares, the Hound is about to kill him but Arya stops him and they let him live. It's an extremely similar story to Jon and the horse breeder, but Arya manages to convince her companion not to kill the target. Then, toward the end of the bloody ordeal, the Hound shows Arya mercy by going back for her at the Red Wedding. He easily could have walked away and let her fend for herself but he is changing already from spending so long on the road with her. They teach each other to be a little more like themselves and manage to make one another better. Then again, Arya does threaten to put a sword through his eye so...baby steps, I guess. 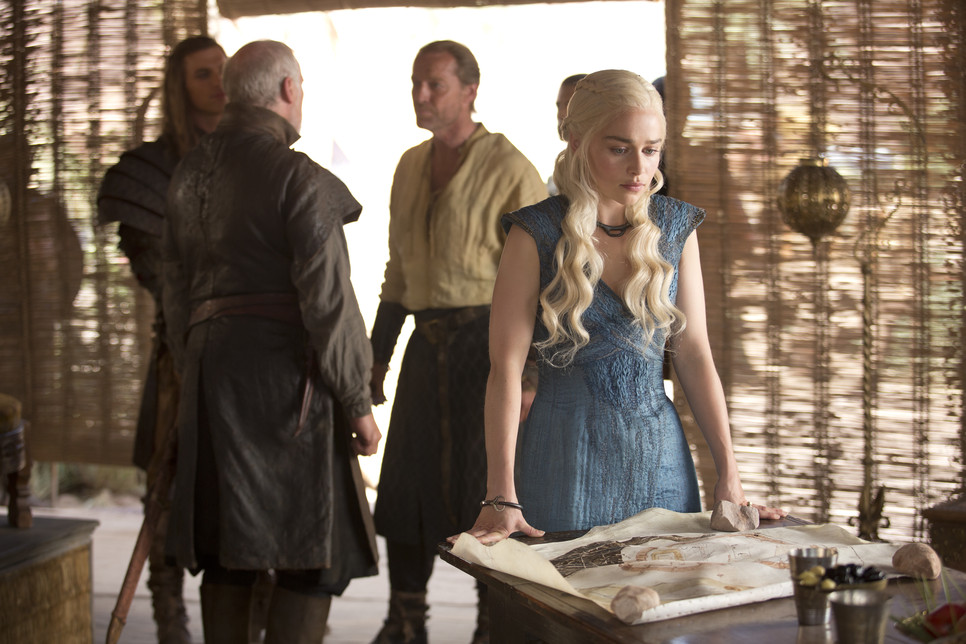 Ok, to be totally honest I kind of forgot about Yunkai... whoops! Seeing it in the intro reminded me of Dany's (Emilia Clarke) whole journey through the slave cities before she settled in Meereen. Here, we see Daario earn her trust by leading Grey Worm and Jorah (Iain Glen) through a back gate to liberate the city's slaves. I'll be writing much more about this in Westeros Revisited: Hardhome, but there are obviously some top-notch fight choreographers on this show and they deserve a hand for the guard fight in Yunkai. I don't see enough praise out there for Jacob Anderson's performance as Grey Worm, probably because he is so stoic, but there's quite a difference in his attitude and confidence now than in these early episodes. The character has really come into his own over the seasons and it's very apparent when you revisit season three.

Tears for the Starks

Obviously, the reason we ball during this episode is for the best (though unluckiest) family in the North. Couple quick notes on the scenes with Bran (Isaac Hempstead-Wright), Rickon, and Hodor (Kristian Nairn) before we get to the main event: the Stark children diaspora is completed this episode when Bran sends Rickon off with Osha. It happens moments before Robb's death and the confirmation that there will never be a full Stark sibling reunion. Ouch. Also heartbreaking in retrospect, this is the first time Bran is able to warg into Hodor which will prove to be another of the saddest moments in the series (more to come with Westeros Revisited: The Door).

There's no more stalling - I've got to talk about the massacre now. The moment I saw the family int heir wedding wear, my heart rate quickened. Talisa (Oona Chaplin) in her grey dress that was about to get stabbed to ribbons. Robb in his noble King-ly garb. So painful. And then the feast came, and then the doors closed, and then "The Rains of Castamere" played. Interestingly though, we got a bit of a musical clue before the title song: earlier in the feast, the band plays "The Bear and the Maiden Fair" which we naturally associate with Brienne's harrowing escape from the bear pit. Too subtle to mean much the first watch through but now it is a nice way to prime the audience with an unsettling feeling. 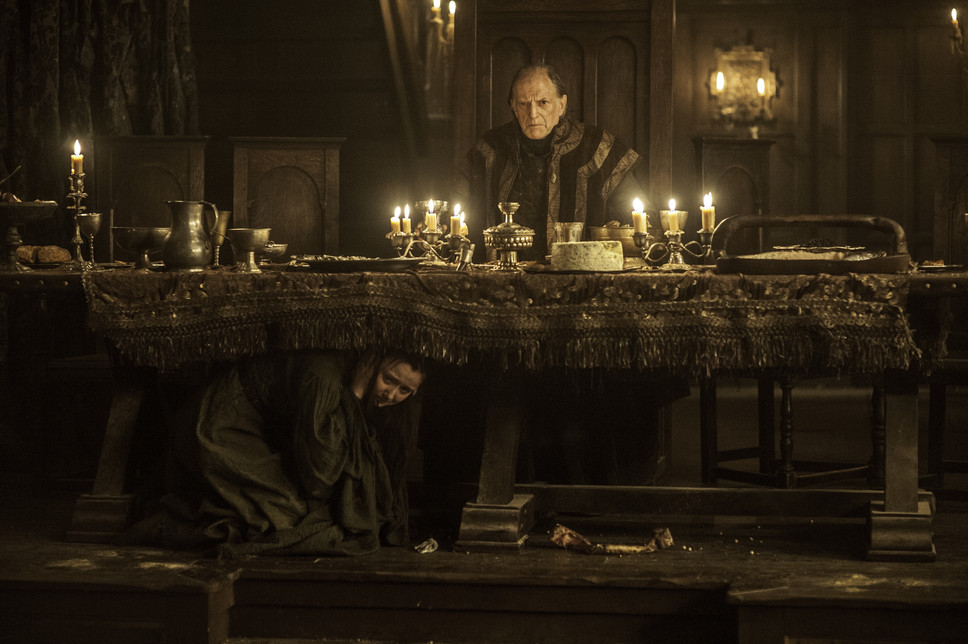 While the entire sequence is gut-wrenching, two moments really struck me this time around. The first is when Grey Wind tried to break out of the kennels to help Robb when he sensed something was wrong. Sad enough as it is, but then the Frey men shot him with crossbows and the kennel stopped shaking. Grey Wind died riddled with arrows like Robb does in the feast hall. My heart! The second moment is at the very end. This series has some top tier actors in it and they have had a multitude of moments to show off, but Michelle Fairley's final scream and despondent stare is one of the finest acting moments in the entire series for my money. RIP half of the Stark family. You will be avenged!

Tears for the Miscellaneous Observations

Stay tuned as we return to season four with Westeros Revisited: The Lion and the Rose and rewatch the entire series with us on HBO