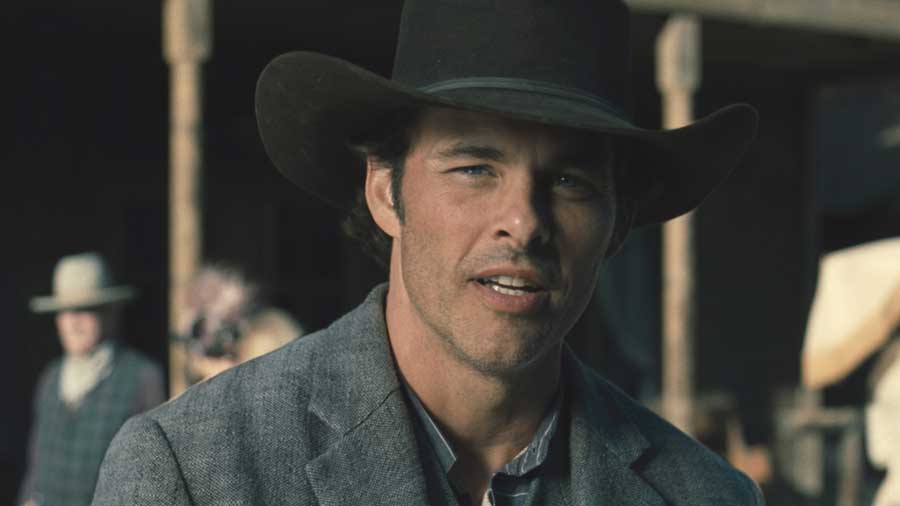 Westworld Season 2, Episode 3 Recap: “There is beauty in what we are”

Episode three ("Virtù e Fortuna") of Westworld's second season really fires on all cylinders. We get to see a new park, two old friends make an appearance, and Dolores (Evan Rachel Wood) continues to be large and in charge — while also showing vulnerability that I wasn't sure she still possessed.

The episode opens with a visit to park six, which seems to be for guests who want to visit India. (Remember the tiger from the season premiere?) We meet a woman who has obviously spent a lot of time in this park, based on her comments about the hosts and the fact that she shoots the man she's going to hook up with to make sure he's human. That's some hardcore paranoia that I guess is justified in Westworld.

Before she shoots him, the man wonders if the park would really go to the trouble of having a host pretend to be human — she responds with a knowing look in the mirror and says, "I wouldn't put it past them." She's obviously not a host, but there's definitely more to this mystery woman.

Anyway, she realizes something is very wrong in the park when the guests she recognizes from the train ride are dead — and they didn't just keel over, they've been violently murdered. She shoots a host who is coming at her with a sword and runs off into the jungle, only to draw the attention of a large tiger. The cat gives chase and is able to follow her outside the boundaries of the park, where it leaps at her and sends them both tumbling over a cliff into a reservoir.

At the end of the episode, we see her emerge on the other side, along with the dead tiger (which explains what the security team finds two weeks later). Unfortunately, the woman lands at the feet of some Ghost Nation hosts. That cannot be good.

In a quick check-in two weeks later, Bernard (Jeffrey Wright) and the security team meet up with Charlotte (Tessa Thompson) at headquarters, where she makes the comment that she's surprised Bernard made it out of the park alive. She didn't think he had it in him. This gives Bernard a mental flashback, and we pick back up with the two of them emerging from the secret facility to look for Peter Abernathy (Bradford Tatum). 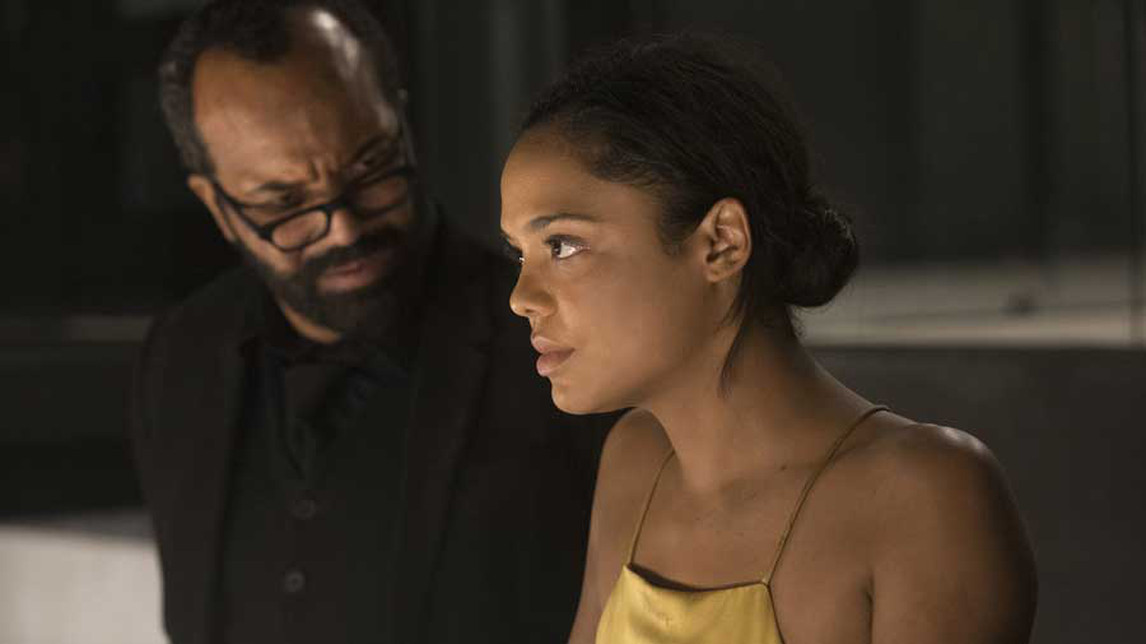 Their quest lands them spying on outlaws who have taken a group of board members hostage — but they also have Abernathy and are treating him like he's human or at least like they don't recognize that Abernathy is a host. That's interesting. Is something making him read as human to them? Hmm.

Anyway, the lead outlaw, a brutal host we've seen several times before, plans to sell the hostages to the Confederados but keep one woman for himself and his men. That is, until Bernard and Charlotte lure him away, bash him on the head, and hard-port into his drive to give him a little attitude adjustment.

Westworld is by no means a comedy, but it does find ways to inject some really humorous moments into the action, and this is one of the best. When the outlaw returns to the group, he's now "the most virtuous, quickest gun in the west" and he lets the hostages go. As one former hostage flees up the hillside, he chases after her shouting, "Wait! You can't roll through these hills! I'll escort you! Keep you safe! Wait for me!" Hee.

But the real prize here is capturing Abernathy. Unfortunately, before Charlotte and Bernard can do so, the Confederados arrive and take Abernathy and Bernard hostage. Charlotte escapes on horseback and rides back to base.

Meanwhile, Dolores and Major Craddock (Jonathan Tucker) take their crew to Fort Forlorn Hope, which is a great name, and she convinces the Colonel to stand fast with all of their men combined against the park security forces heading their way. 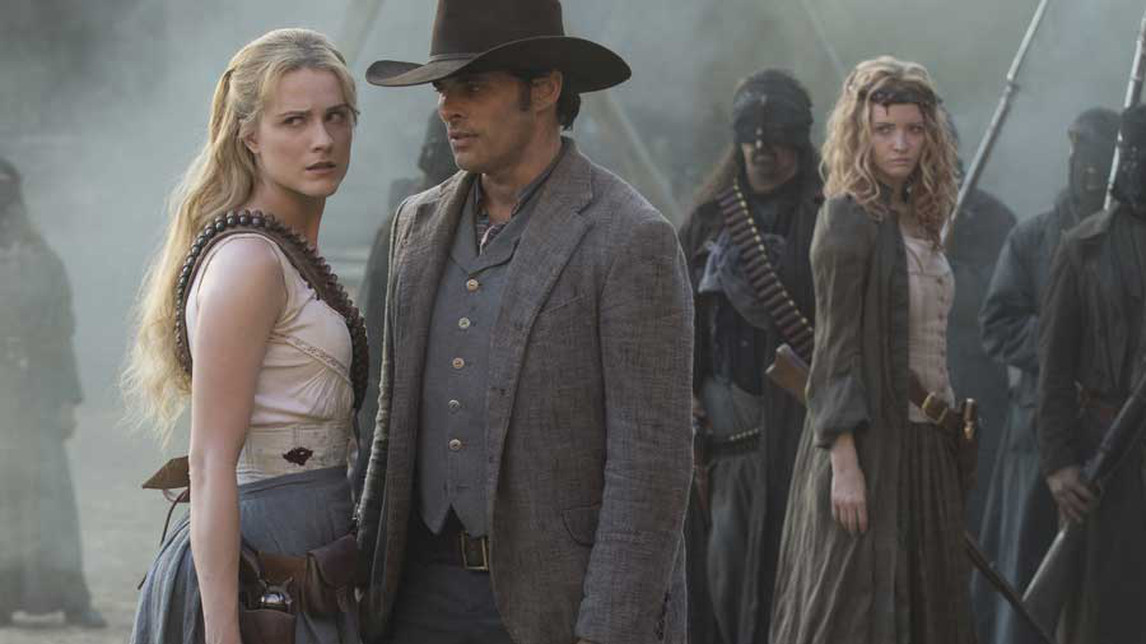 She seems to have everything under control until she sees Abernathy. The Confederados have brought their hostages back to the fort, and Abernathy and Bernard are among them. Abernathy is not in good shape, what with all that massive park data jumbling up his drive, and Dolores is heartbroken by what the humans have done to him. She still thinks of him as her "father" and shows a surprising amount of tenderness and concern for him. She asks Bernard to try to fix him, but Bernard can only manage to get a short peek at the insane code in Abernathy's drive before park security shows up and absconds with Abernathy.

It's a beautifully done couple of scenes, with Dolores telling her "father" about breaking free and starting this war. You can tell that while she believes in her cause, she is still struggling with all the violence. Part of her probably regrets not just taking the path Maeve (Thandie Newton) has taken: laying low and trying to escape out into the world.

While I don't think Dolores is having second thoughts necessarily, it's nice to see that all this bloodshed and killing is affecting her. She knows that if they don't fight the humans, the humans are going to kill them all — as she tells Bernard, "There is beauty in what we are. Shouldn't we too try to survive?" — but part of her at least longs for the comfort of "home," and that's what her father represents right now.

Abernathy's kidnapping puts a wrinkle in her plans, though. She dispatches groups in all directions to look for him, while she and Teddy (James Marsden) head for Sweetwater to retrieve something (we don't know exactly what) she needs. It'll be interesting to see what Sweetwater looks like now that all hell has broken loose in the park. 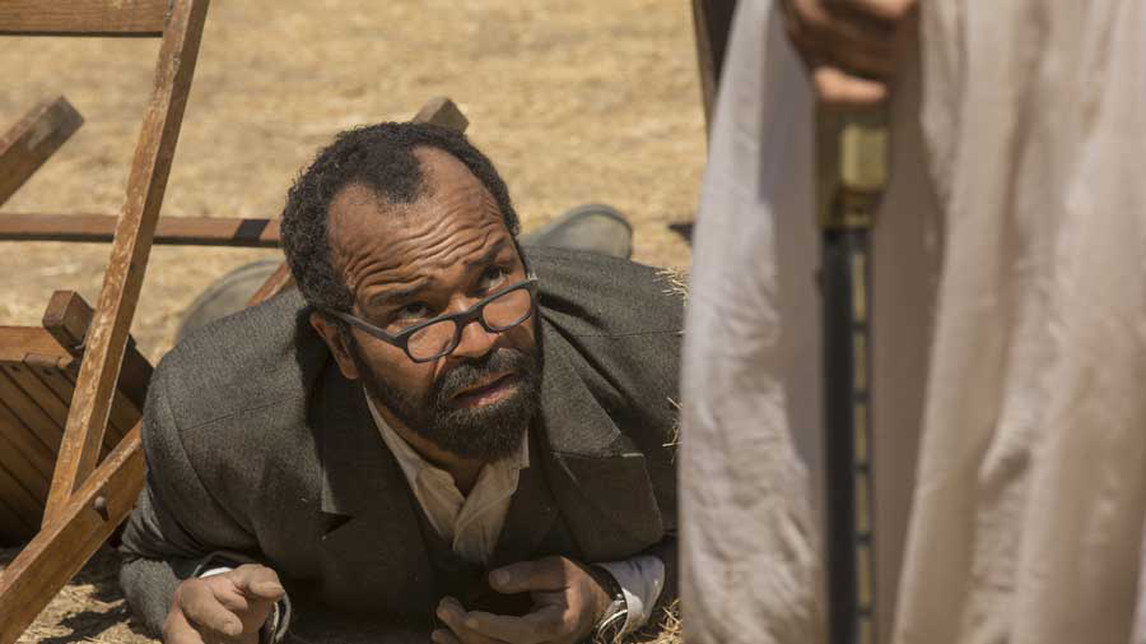 In the mayhem, Bernard tries to escape, but Clementine (Angela Sarafyan) knocks him out and drags him off. Now that's interesting. I can't imagine Clem was acting on Dolores' orders because Dolores would want to keep Bernard with her; he's the only chance she has of "fixing" her father. So what's going on here?

Reunited And It Feels So Good

Maeve, meanwhile, is making her way to the homestead topside in the park, but an encounter with some Ghost Nation hosts who want to kill Sizemore (Simon Quarterman) drives them back underground. Can I just say how hilarious it is that Sizemore is dressed like a farm boy and has an actual donkey to lead around? That's so perfect for him. 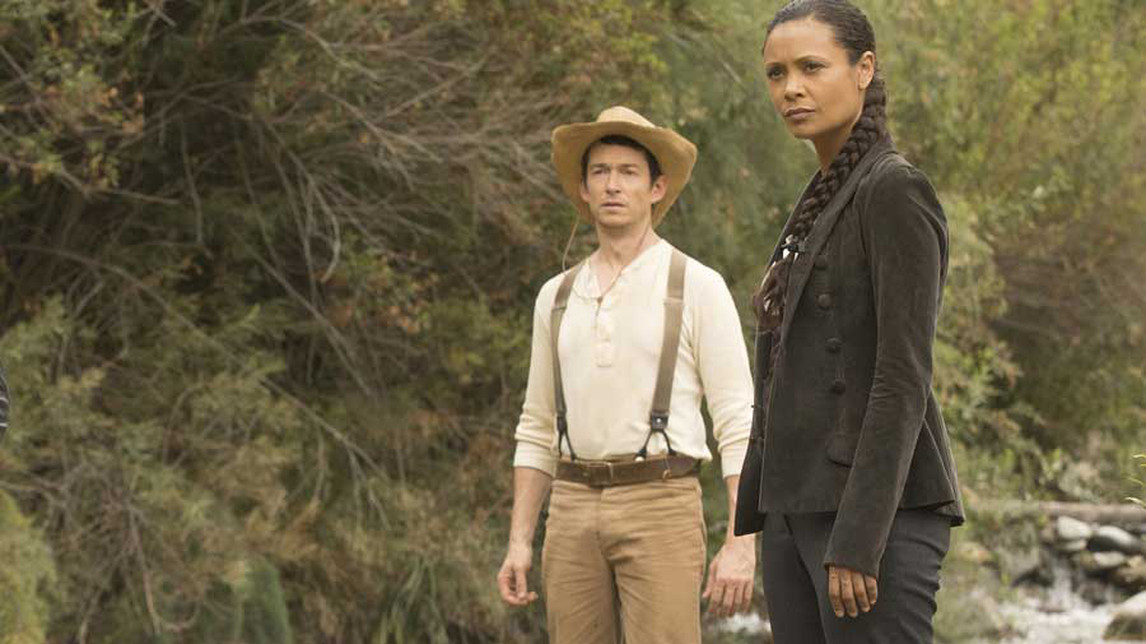 Anyway, once they're back in the tunnels, we are treated to two excellent reunions. First, Hector (Rodrigo Santoro) is reunited with his Gal Friday, Armistice (Ingrid Bolsø Berdal), who now has a robotic hand after she cut hers off last season escaping QA. And then we see Felix (Leonardo Nam) is alive! Armistice saved both Felix and Sylvester (Ptolemy Slocum), which is great. Felix and Maeve were one of my favorite relationships in season one, and Sylvester is a good foil for the kind, noble Felix. When they appeared on screen, I actually clapped.

So this ragtag band of six sets off for the homestead, but they get a little turned around in the tunnels and end up in a wintery environment. Sizemore thinks they're in the Klondike part of Westworld, but a samurai running out of the trees wielding a massive sword tells us otherwise. Well, it looks like we may be about to see another new park. 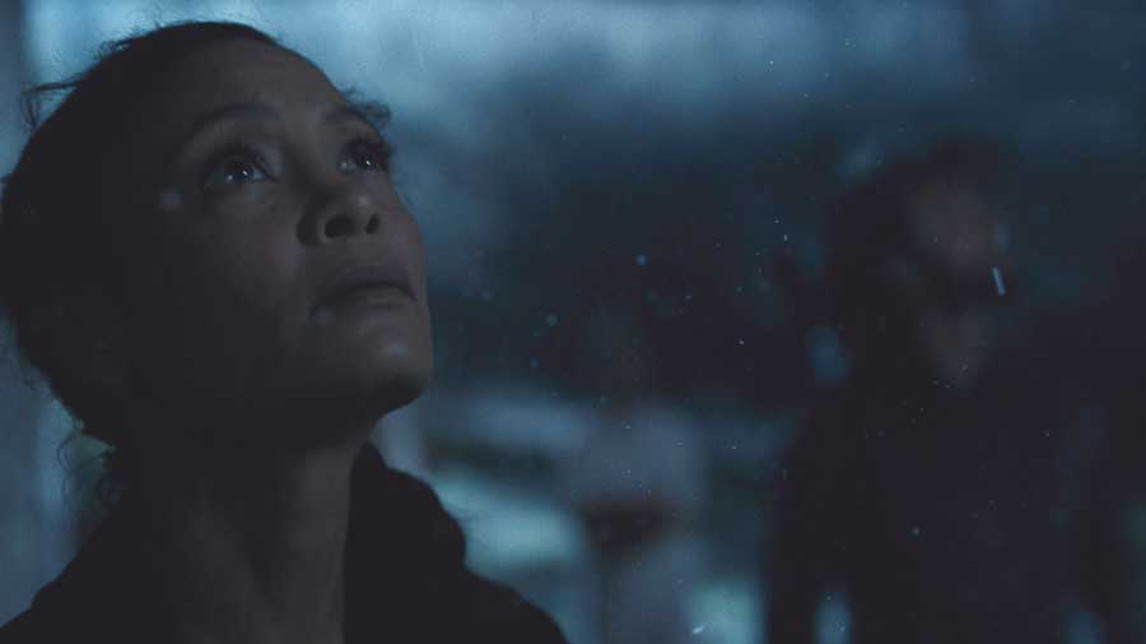 Seriously, what an exciting episode. As much as I want Dolores and Maeve to team up at some point, they are on completely different but equally compelling adventures, especially now that Dolores has her own loved one she's worried about rescuing. It will also be very interesting to see how she deals with Teddy. She gave him the task of executing Craddock and his men, and Teddy couldn't do it. He thinks he pulled a fast one on Dolores, but she saw it all and she knows that Teddy's squeamishness is a problem that has to be dealt with sooner or later.

"Virtù e Fortuna" sets up a lot of great threads for the rest of the season. I cannot wait to see what next week holds.