Westworld Season 2 Premiere Recap: “The game will find you”

Westworld's season two premiere on HBO Sunday, April 22 ("Journey Into Night") started filling in some details about what's been going on in the park since the incident, i.e. when Dolores (Evan Rachel Wood) shot Ford (Anthony Hopkins) and all hell broke loose. Of course, this being Westworld, every answer raised two new questions. Let's wade right in, shall we?

Bernard (Arnold?) and the Flood

The action begins with Jeffrey Wright sitting with Dolores in a remote diagnostic facility. This scene can definitely be interpreted a couple different ways, depending on who Wright is playing.

At first glance, especially taking into consideration where Bernard awakens two weeks after Ford's shooting, it seems like this could be Bernard telling Dolores about a dream he had where she and "the others" (presumably other hosts?) left him behind in the ocean and the water was rising around him. They talk about the nature of what is real — "that which is irreplaceable," says Bernard, which Dolores says is not a completely honest answer — and then Bernard experiences what appear to be a series of flashbacks.

There is footage of last season, and there is also footage we've never seen before, like Bernard firing a machine gun and Bernard following Dolores as she walks around in a black evening gown. It seems like the "flashbacks" that are new to viewers are what happened to Bernard in the two weeks between "the incident" and present day, but with this show, you never know. Also, this first scene between Bernard and Dolores seems to be taking place further in the future than anything else we see in this episode and Dolores seems like she has been rolled back from her awoken state; it's possible this scene is a time period the season will eventually catch up with.

But another possibility is that this is actually a flashback to the early days of the park and Wright is playing Arnold here. The show's editing may be making it seem like the dream refers to all the drowned hosts, when instead it's a dream Arnold had a long time ago that he told Dolores about when she was in a brand-new host. Perhaps Arnold was having some very prophetic dreams. This could be a flash-forward rather than a flashback, but it is obviously meant to be vague and open to interpretation.

Anyway, after the scene in the remote diagnostic facility, we jump to two weeks after the incident when Bernard awakens on a beach. He is hazy on what happened to him since Ford's murder, so the security team works to jog his memory. First, they dig out the brain drive from a dead Ghost Nation host, which shows Dolores shooting the host and telling him that "not all of us deserve to make it to the valley beyond."

What is this valley beyond? Is it the valley we see at episode's end, the one that someone flooded? Or is it the outside world that Dolores tells Teddy (James Marsden) the hosts must overtake as well? I don't think we're supposed to know just yet. 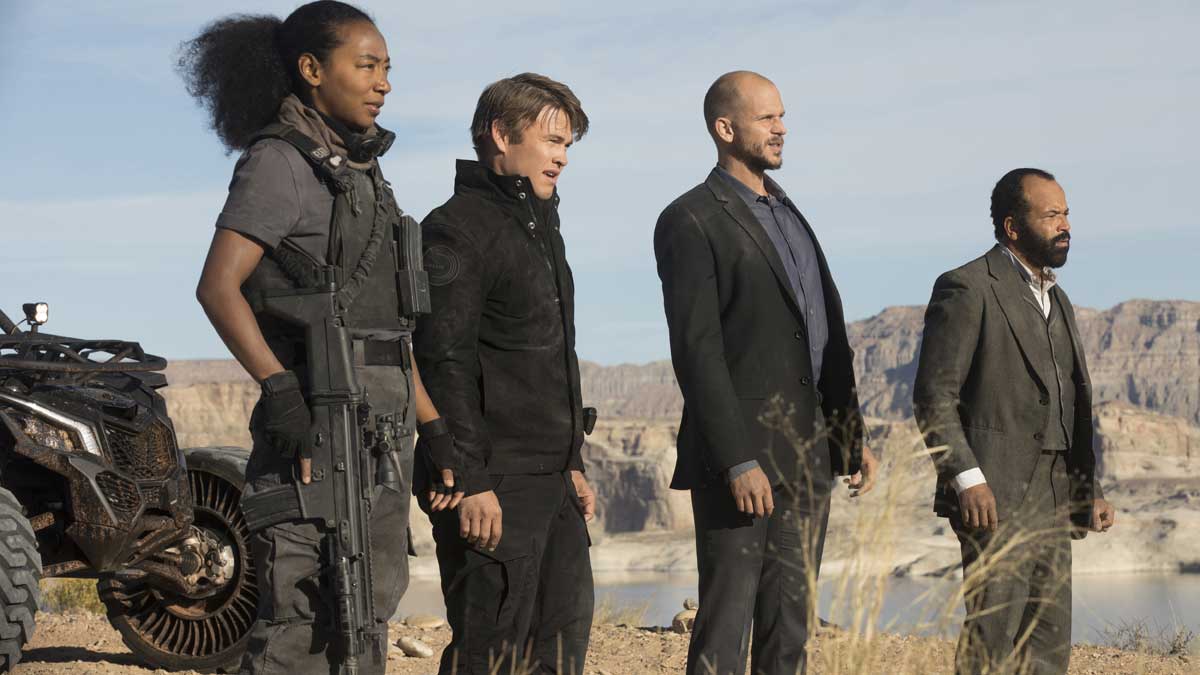 Later, the security detail and Bernard set out to find a cluster of hosts. They first explore a lake where a Bengal tiger has washed ashore, a stray that crossed the boundary from park six.

The security detail eventually finds a cluster of hosts in a valley that has been so flooded that it is now a vast sea. Who flooded it? Is the flood what killed all the hosts or was it something else? Why does Bernard say he killed "all of them"?

Either way, that's basically what's happening in "present day," i.e. two weeks removed from the incident. The rest of the episode is devoted to flashbacks to the immediate aftermath of the incident.

Dolores and Teddy Together?

After her grand awakening, Dolores is ready to cut a swath through the board members as payback for all their years of facilitating people treating her any way they wanted. In one of the first musical delights of this season, there is an excellent montage of her chasing down terrified board members set to Scott Joplin's "The Entertainer," and she eventually gets to monologue a little while she strings up some of them.

"You're in a dream. You're in my dream... The rancher's daughter looks to see the beauty in you, the possibilities. But Wyatt? Sees the ugliness, the disarray," says Dolores. "Under all these lives I've lived, something else has been brewing. I've evolved into something new. And I have one last role to play — myself."

It's pretty great. Violent, yes, but it's hard to have any sympathy for the board members. The scene is definitely Dolores' high point this week. She talks to Teddy about taking over the outside world and kisses him passionately, saying he's her constant, which is... somewhat surprising. I thought Dolores "loved" Teddy because she was programmed to and her only true romantic feelings were when she fell in love with William (Jimmi Simpson). I didn't expect the awoken Dolores/Wyatt to feel this way about Teddy, but here we are. 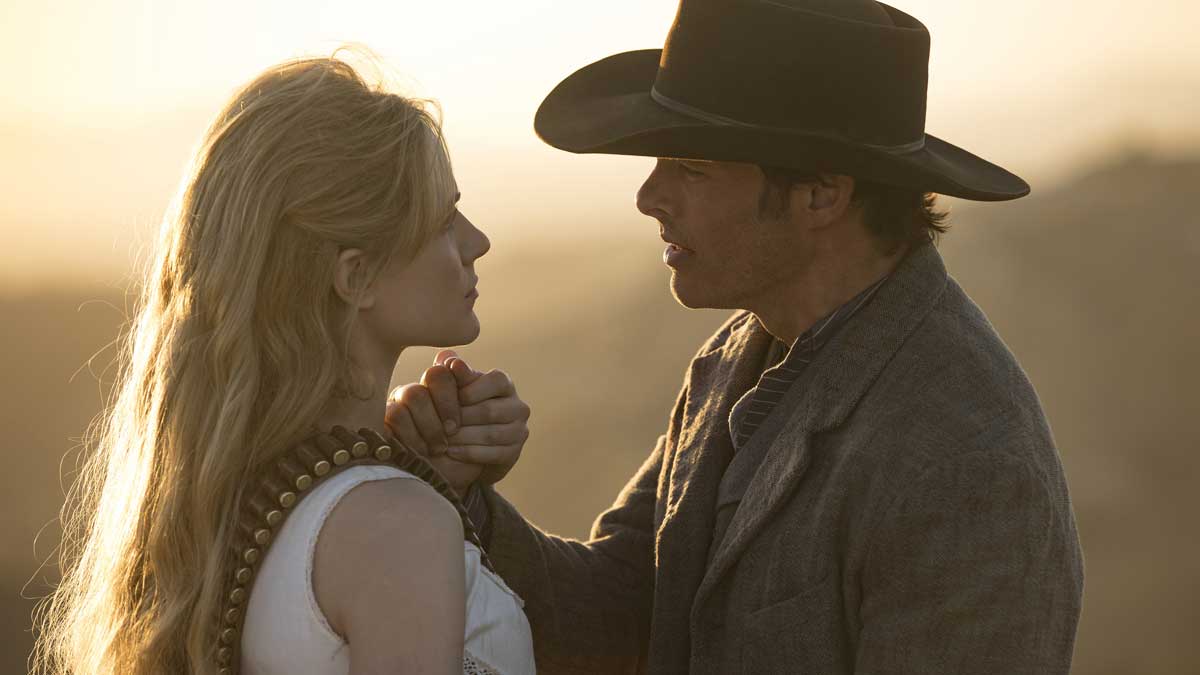 At the episode's end, Angela (Talulah Riley) finds Dolores and Teddy and says, "We found it," to which Dolores tells Teddy he has to see this, to see the truth. Viewers are purposely left in the dark, though my theory is that the "it" in question is actually a host.

Bernard and Charlotte in a Rough Patch

In the immediate aftermath of Ford's death, Bernard and Charlotte (Tessa Thompson) take up with a group of redshirt board members and try to make it to a remote outpost to call for help. A clever trap set by Angela and her henchmen dispenses with all the nameless people in formal wear we don't care about, giving Charlotte and Bernard a chance to escape.

They don't end up at the outpost, however. Charlotte gets them into a secret bunker where drone hosts are extracting video "memories" and some kind of samples from the park's "human" hosts. Bernard realizes the park is logging the guests' experiences and DNA, which — what? But that's a problem for another day because Charlotte finds out that help is not on the way. 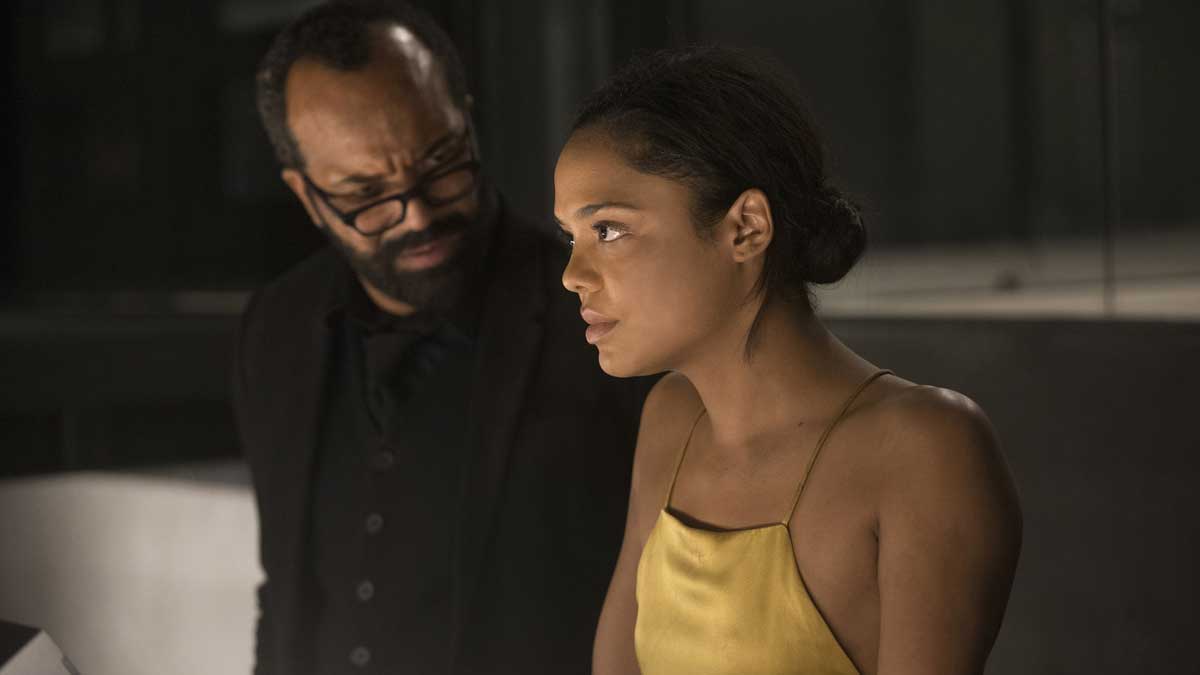 She communicates with a nameless outside source, who tells her that until "the package," i.e. Peter Abernathy, is delivered, the extraction protocol is suspended (if you've followed season two's viral marketing, you've seen the video alluding to this). That's problematic for Charlotte, who is likely to be killed by the first non-Bernard host she meets. But Bernard has his own problem. Somehow in all the ruckus, he sustained a critical injury. The fluid that holds the hosts' "brains" is leaking out of his ear, and it's causing him to have some serious physical problems. He manages to extract some fluid from a host the drone hosts are working on and inject it into his own head, but that feels like a temporary fix.

Bernard is going to have to find someone who can fix him (and also keep his or her mouth shut, because hardly anyone knows that Bernard is a host). I'm hoping this is the way the show integrates Felix (Leonardo Nam) into the season because it would be a real shame if he's gone for good. It would also be a shame if Felix and Maeve (Thandie Newton) are never reunited.

Maeve and Sizemore as an Unlikely Team

Interestingly enough, Maeve actually gets a new buddy human (at least for now) in Lee Sizemore (Simon Quarterman), and that's a pairing I never knew I wanted. She saves him from being eaten by his own cannibal host and begrudgingly says he can tag along with her on her quest to find her daughter because his knowledge of the park should prove useful. 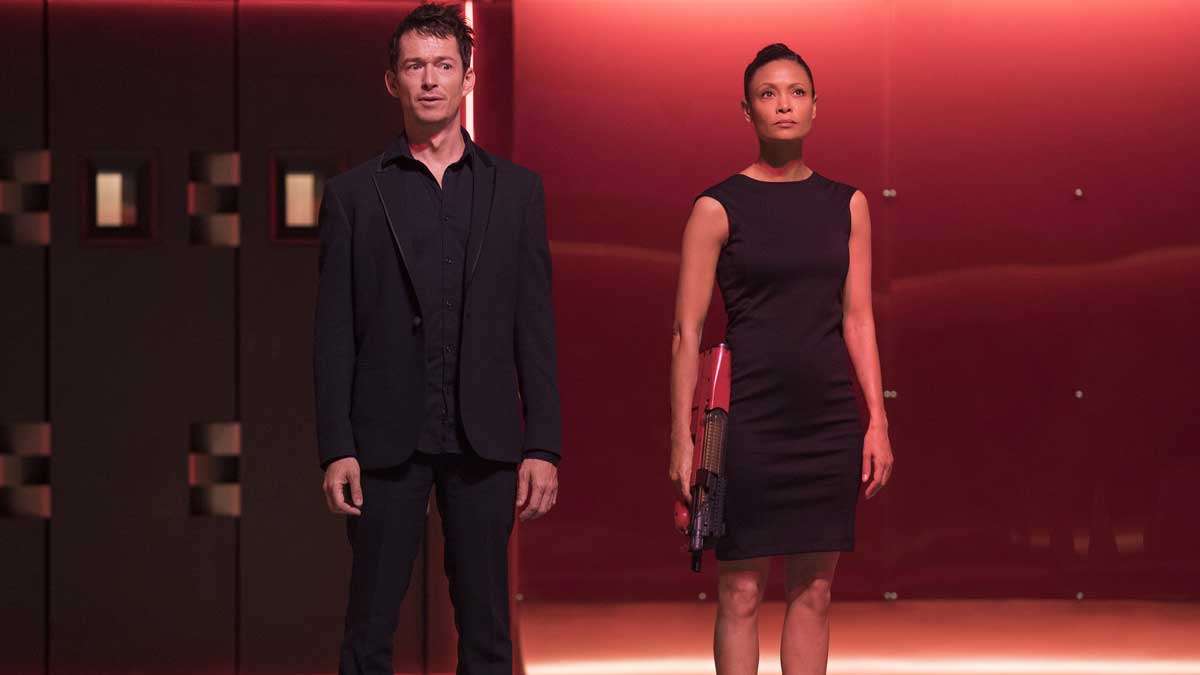 First, they track down Hector (Rodrigo Santoro) and patch him up — and his reunion with Maeve is very sweet. Now they just need to find Armistice (Ingrid Bolsø Berdal) and Felix so the band will be back together again.

It's not a very eventful storyline this week; they mostly just prepare to go out into the park to find Maeve's daughter in sector 15 — which, I'll eat my hat if any part of Westworld is "family friendly." But it does give us some wonderful banter between Newton and Quarterman, including this particularly funny exchange:

Maeve: "If you try something like that on me again, I'll relieve you of your most precious organ and feed it to you. Though it won't make much of a meal."
Sizemore: "I wrote that line for you."
Maeve: "Bit broad if you ask me."

The Man in Black Gets a New Puzzle

And finally, we have what I found to be the most interesting storyline this week. First off, props to Ed Harris for acting almost entirely by himself and still being completely captivating. Secondly, at the end of season one, I worried that the mystery element to the show would be pretty much gone and that was a bummer. 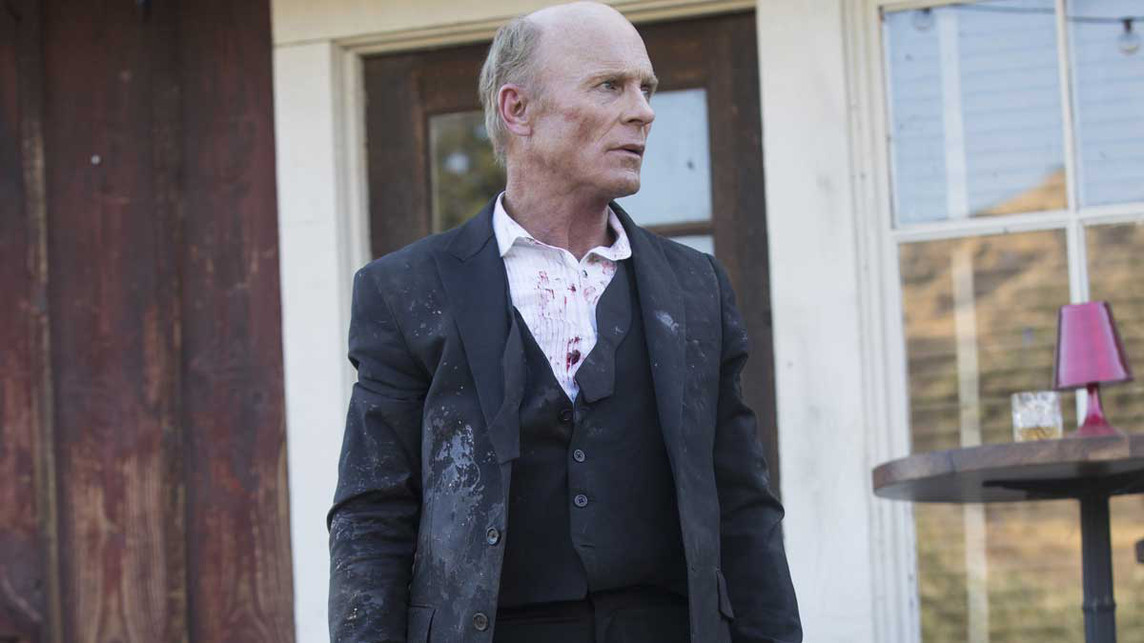 So imagine my delight when the Man in Black meets young host Robert (Oliver Bell), who tells him it's time to solve another puzzle — not Arnold's this time, but Ford's.

"In this game, you have to make it back out. You have to find the door. Congratulations, William. This game is meant for you," says host Robert. "This game begins where you end. It ends where you began... don't worry, the game will find you."

I honestly don't care what the end of this thread even turns out to be, I'm just glad there is a new mystery. I do hope it leads to the Man in Black crossing paths with other characters, however. Harris is a tremendous actor by himself, but I would love to see him interact with other people too.

Overall, I thought this was a very solid opening for season two. A season needs time to build up tension and excitement, and this episode quietly introduced some great new paths and gave us some excellent character work. Mysteries and twists make a show exciting, but the character depth is what gives it heart and makes us care, so more of that is always welcome.