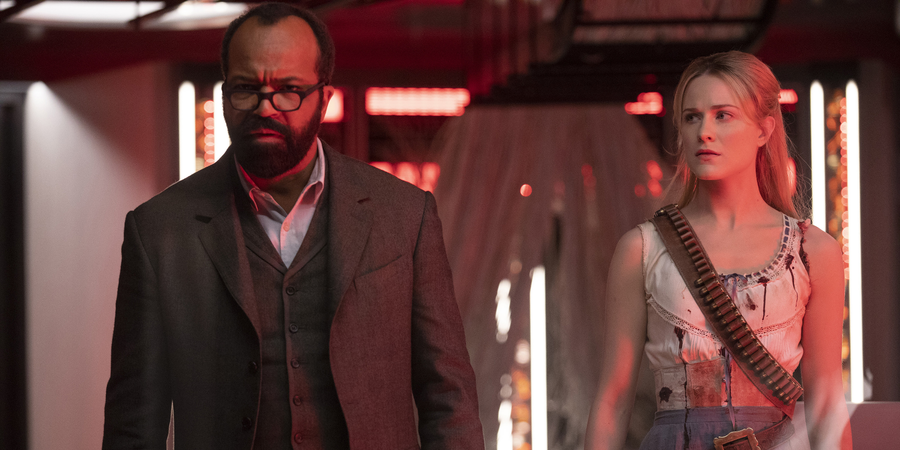 Westworld Season Two Finale Recap: “Be careful what you wish for”

The Westworld season two finale aired Sunday (June 24th), and in typical Westworld fashion, there were plenty of jaw-dropping moments and a lot of deaths — though I suspect many of them might not stick. But the biggest event of "The Passenger" is that it tees up quite an interesting third season... that may not take place in the park at all.

I'll also say this: I think I'll enjoy season two even more when I rewatch it. Mysteries and twists are fun, but with season one, there were additional layers I noticed only when I already knew the outcomes and the twists. There aren't many shows this fascinating to rewatch. Hats off to you, Westworld writers.

Reunited (And It Doesn't Feel So Good) 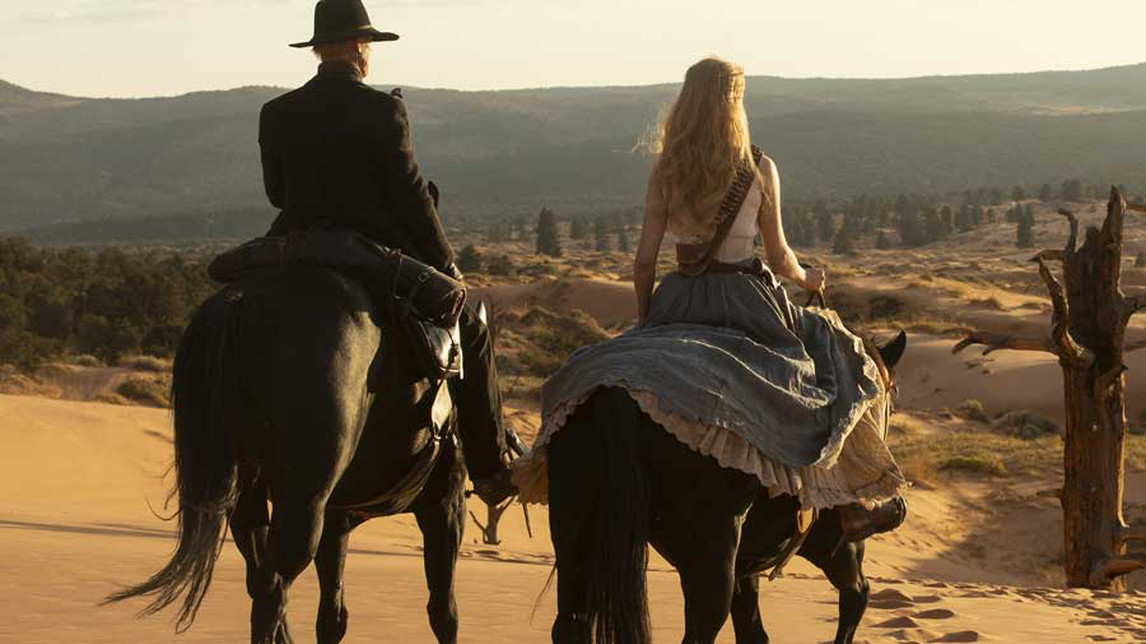 After taking a moment to grieve over Teddy's (James Marsden) body, Dolores (Evan Rachel Wood) rides for the Valley Beyond, picking up both the Man in Black (Ed Harris) and Bernard (Jeffrey Wright) along the way. Luckily, she'd suspected that the Man in Black would turn on her, and she takes him out by (earlier) putting a damaged bullet in his gun. The sabotaged gun basically blows up his hand, and Dolores leaves him for dead. But we'll come back to him later because the Man in Black has a very intriguing post-credits scene.

Bernard and Dolores get to the Forge and then enter its storage facility, which, like the Cradle, is a simulation. There we meet the park's ultimate A.I., which takes the form of Logan (a welcome little return by Ben Barnes). He explains that the park's system has run scenario after scenario with James Delos (Peter Mullan) and other guests and has arrived at the conclusion that humans are startlingly simple creatures who live basically according to their own "code" — not a moral code, a computer code. There is no free will, and a human can essentially be boiled down to about 10,000 lines of code (that's not much).

It's an interesting commentary on the show's theme of human consciousness versus host consciousness — essentially, arguing that hosts have more free will than humans. But this isn't entirely what Westworld (the show) wants to convey, I don't think, because it has also given us examples of humans who can and have changed. The show's argument doesn't seem like it's settled.

But anyway, A.I. Logan shows Dolores and Bernard how to open "The Door," which turns out to be a kind of virtual heaven only for hosts; humans can't even see it — a nice callback with the "What door?" line. When Dolores doesn't want to let the hosts choose that path, Bernard kills her (but don't panic! There's more.) to stop her from destroying all the hosts.

Meanwhile, Maeve (Thandie Newton) breaks out of the Mesa. Her knights in shining armor, Hector (Rodrigo Santoro), Sizemore (Simon Quarterman) and co., show up to help her, but she has already helped herself by taking out a security team with help from some robotic bulls. This scene! Maeve and the herd of bulls taking out the security team is exquisite, played to great dramatic effect with slo-mo shots and a magnificent score. 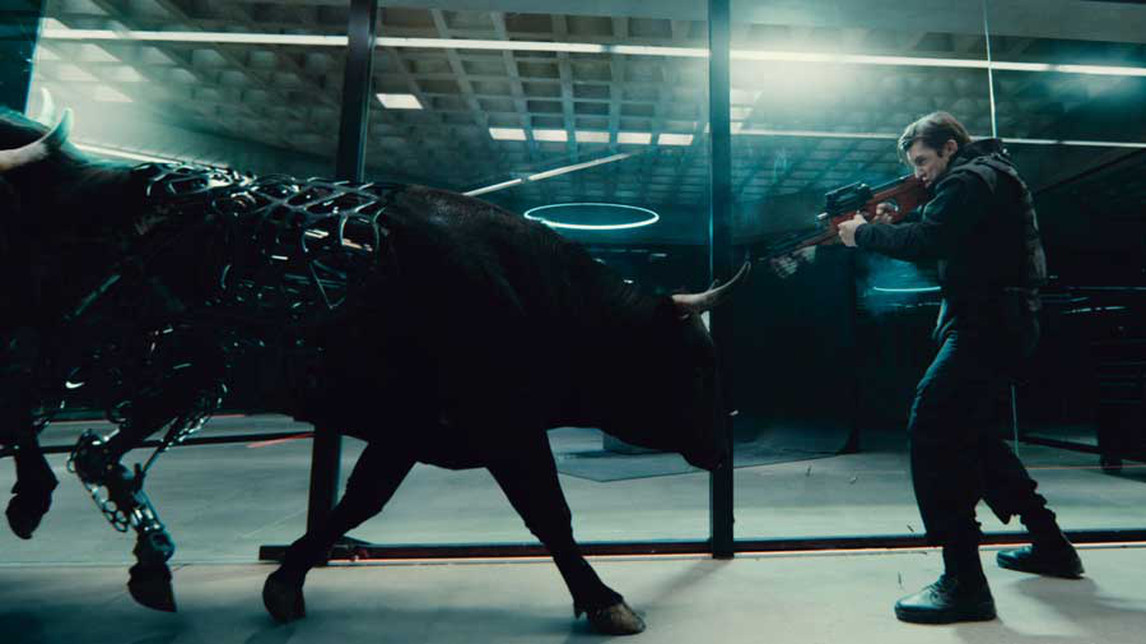 Maeve and her team head for the Valley Beyond, hoping to save themselves and as many hosts as they can from park security forces, now armed with Clementine (Angela Sarafyan), who can now control hosts with her mind and make them kill each other, on a pale horse. When Maeve and her group run into some trouble along the way, Sizemore completes his redemption arc by sacrificing himself to let Maeve and the rest escape.

To my earlier point, this is a shining example of a human changing over the course of the show and exercising free will to help others (robot others, no less). As Sizemore is taken out by security, he recites one of his own monologues that he wrote for the park — it's a really lovely scene for him. RIP, Sizemore. You did well.

But with security and Clementine hot on their heels, Maeve realizes the best she can do is to save her daughter. In yet another really gorgeous scene, she and her team fight their way to the head of the line of hosts — protecting her daughter and her (second) mother long enough for them to escape through the Door with Akecheta (Zahn McClarnon). When Maeve mouths "I love you" to her daughter as she is gunned down and then Akecheta is reunited with Kohana (Julia Jones), there was not a dry eye in my house. Thank goodness a few characters got their happy endings.

By the end of this massacre, it appears that Clementine, Maeve, Hector, Armistice (Ingrid Bolsø Berdal) and Hanaryo (Tao Okamoto) are all dead. But take that with a grain of salt because Felix (Leonardo Nam) and Sylvester (Ptolemy Slocum) survive and later are tasked with salvaging any hosts that they can. We'll just have to see if any of these hosts reappear next season. 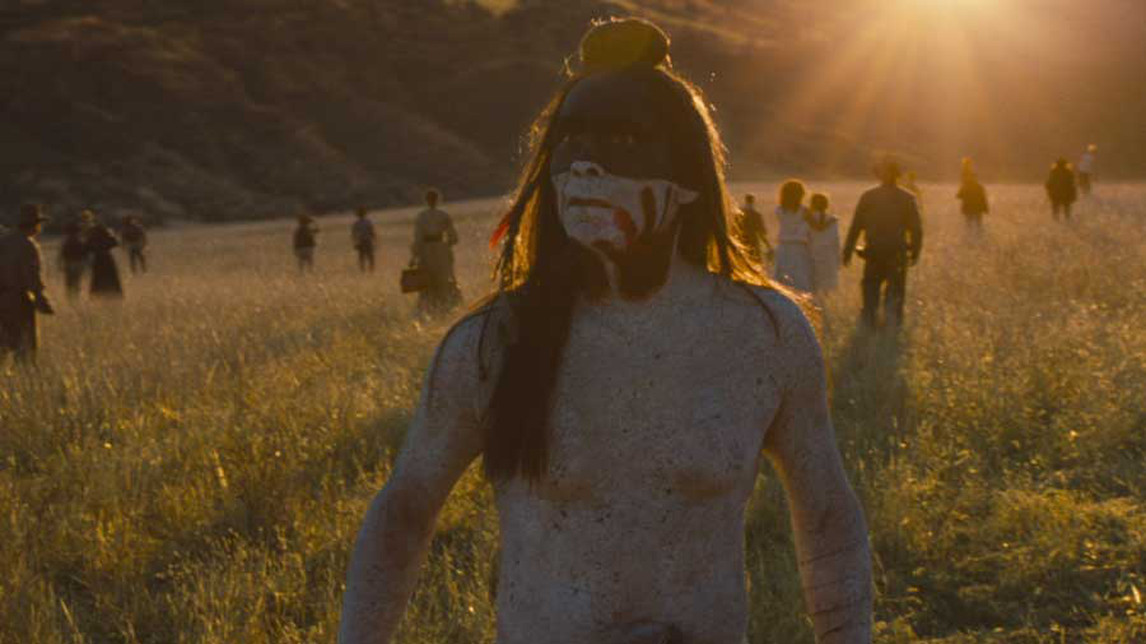 Be Careful What You Wish For

After the Forge begins to flood (part of the failsafe Dolores activated to destroy all the data), Bernard goes back to the Mesa and Elsie (Shannon Woodward) says she'll protect him. But when Elsie confronts Charlotte Hale (Tessa Thompson) about the park recording the guests' consciousness, Hale tells Elsie she's too morally good to keep around and kills her.

After the flooding subsides, the security team enters the Forge and finds Dolores' body. They try to upload the guests' data to the mainland, but they can't because it's not there. Twist time! It turns out this Charlotte is not Charlotte at all. She's a host body version of Charlotte with Dolores' drive inside her head. Bernard had been creating a host replica of Charlotte and after he shot Dolores, he put Dolores' drive in host Charlotte's head. Host "Charlores" then killed the real Charlotte, telling her, "You wanted to live forever. Be careful what you wish for." What this means is that in every "present day" scene, i.e. two weeks after Dolores killed Ford, Charlotte has actually been Dolores in disguise.

Note: I can't wait to go rewatch those scenes. I suspect we're going to see some excellent choices on Thompson's part that now make total sense. I'm already thinking of when she says to Bernard, "Didn't think you had it in you." That seems like a very Dolores thing to say. 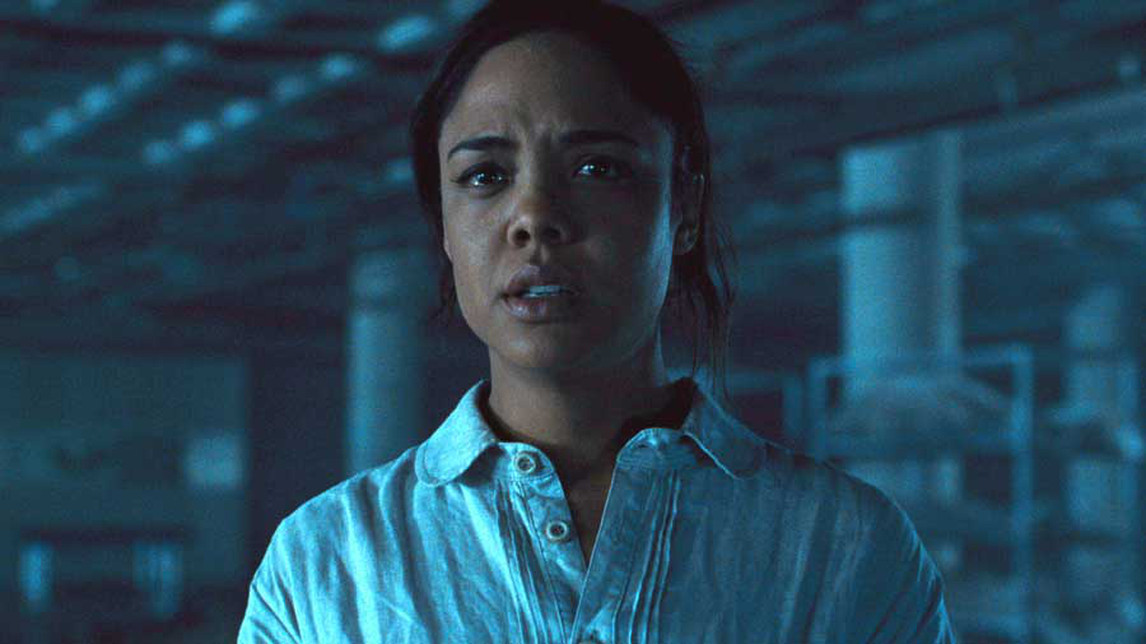 Anyway, Dolores-as-Charlotte sends the Eden hosts' consciousness somewhere the humans can never find (so she says) and then she shoots Bernard so she can take his consciousness out of the park with her.

Dolores is then able to escape to the mainland because Charlotte Hale has already been cleared as a human. She gets an assist from Ashley Stubbs (Luke Hemsworth), who doesn't come right out and say it but implies that he's also a host, created by Ford to protect the other hosts. That reveal actually explains a lot about Stubbs' behavior over these two seasons.

On the mainland, Dolores goes to Arnold's house, where there is a host-making machine that Ford left for her. She re-creates Dolores' body and puts her own mind back inside, then also creates another Bernard and puts his mind in there. She tells him that they're going to be facing off now, with her trying to destroy mankind and him trying to save it. Season three, here we come.

The post-credits scene shows the Man in Black taking an elevator down to the Forge, except the Forge is long-since abandoned. There he has a conversation with Emily (Katja Herbers) where she is testing him for... wait for it... fidelity. 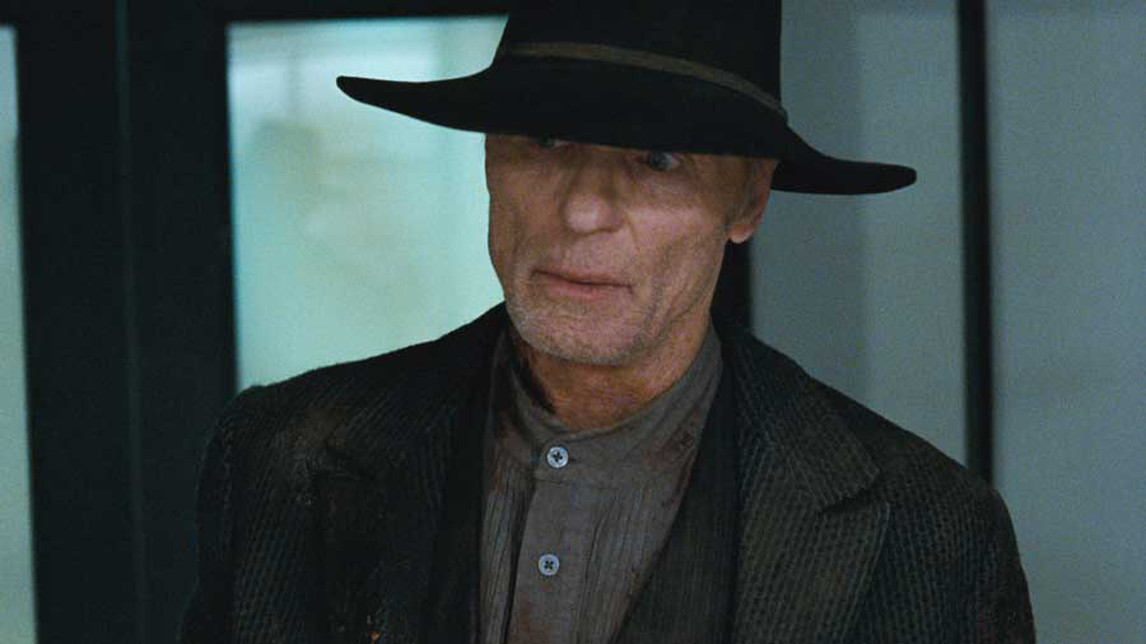 Unanswered questions: We saw the Man in Black survive the park uprising (his still-alive body is shown having been picked up by security) and this scene is obviously in the future. So is this version a host Man in Black and there is also a real Man in Black running around? Or is the real Man in Black dead and this is all that is left of him? And is the Man in Black host doomed to repeat a loop where he always kills his daughter? Trapped in a hell of his own making?

Needless to say, there are a lot more unanswered questions. I'm excited for season three.

Best Quotes of the Finale

No. 5: Emily: "Tell me, what were you hoping to find? To prove?"
Man in Black: "That no system can tell me who I am. That I have a fucking choice."

No. 4: "If I were human I'd let you die. It will take both of us if we're to survive. You'll try to stop me, both of us will probably die, but our kind will have endured." — Dolores

No. 3: "I wish you were the kind of person with the moral flexibility that I need." — Charlotte

No. 1: "I'd rather live with your judgment than die with your sympathy." — Dolores