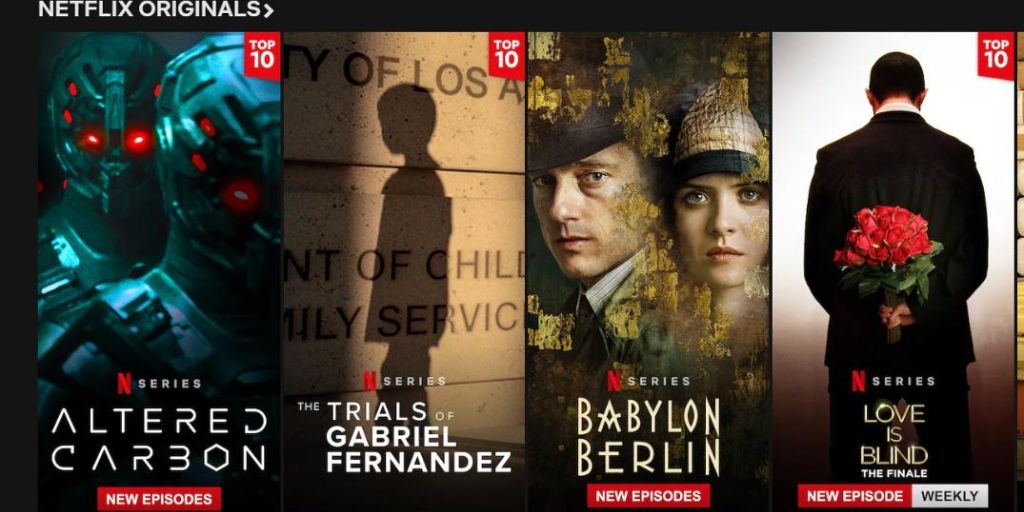 Netflix’s new Top 10 list has been in the U.S. for a little while now, and it’s the most information Netflix has given the public about how “well” its shows are doing other than periodically releasing metrics for its various megahits. Granted, there’s a complete lack of context and scale to the top 10 list (for all we know the #1 show could be watched 50x more than the #2 show), but it’s better than nothing.

I’ve been keeping an eye on the Top 10 list since it arrived, and I’ve noticed at least a few patterns that we can glean from the lists that have come and gone, as many patterns remain.

For starters, here’s the current Top 10 list at the time of this writing:

1. The Trials of Gabriel Fernandez (a documentary miniseries about a brutal case of child abuse and murder)

4. Altered Carbon (the second season of a hard-R sci-fi show based on a book)

5. I Am Not Okay With This (season 1 of a short “teenager gets superpowers” series)

6. Life as We Know It (a Katherin Heigl/Josh Duhamel romantic comedy from 2010)

10. Locke and Key (a supernatural fantasy show based on a graphic novel by Joe Hill)

It’s, uh, quite a list, but over the past couple of days and weeks, the general patterns seem somewhat similar, and I think we can glean at least some level of information from Top 10 charts like these.

Shows could argue for renewal based on their Top 10 spots

In the past, we have heard about showrunners being frustrated that they don’t have official ratings metrics to go on to know if their shows are doing well or not. Now that the Top 10 list exists, it might be a little easier to point to the list and go, “Hey, we were on this for X amount of weeks, people like us.”

For some shows that may be easier than others. Altered Carbon might be higher than I Am Not Okay With This, and yet it’s no doubt a show that costs far, far more to produce, so that placement may not matter as much and it may have to draw a lot higher viewership to get renewed.

Meanwhile, I have seen Locke and Key on the top 10 list pretty much ever since it premiered two weeks ago, so that seems like a fairly solid indicator that it should be picked up for a second season (a show trending for two weeks on Netflix is a lifetime, given the binge-y nature of the service).

One of Netflix’s biggest cultural impacts to date was Making a Murderer a few years back, and Netflix has been cranking out these sorts of programs endlessly, documenting old crimes to try and make new series stick. Some have, but it feels like The Trials of Gabriel Fernandez is one of the first to get back in to true “must-watch” territory, given how long it has sat at a clear #1 on this list. This is despite its containing what is absolutely some of the hardest-to-watch-and-hear accounts of violence and abuse of a child I have ever experienced in any documentary like this, but it’s being recommended all across the service because of how it examines the structural problems of child services and other government agencies that failed to intervene. It’s horrifying, but important to watch and to remember the life of the young child at its center.

In a case like this, there’s no “second season” coming (Making a Murderer did get one, and that probably wasn’t necessary), but it’s possible the documentary team could be pursued by Netflix to focus on a new case to try and replicate the viewership.

From the very beginning, Netflix has struggled with its movie selection in comparison with some of its rivals, a problem that is only increasing as more and more media megacorps like Disney make their own services and pull their movies off Netflix (this literally just happened with Black Panther, which went to Disney Plus in the past few weeks).

The result? Some truly, truly weird “trending” movie choices on the list like decade-old romantic comedies, kids' movies or buddy-cop comedies. At least this past week, there are no Netflix original movies on this list (the Pokémon movie is technically classified as a Netflix film, but I’m not sure why; I think they just altered the Japanese original bit), though I have seen brief appearances from the likes of Anne Hathaway’s The Last Thing He Wanted or To All The Boys: PS I Still Love You, though appearances from any movies on this list, new or old, Netflix or not, are usually pretty fleeting before people move on. But yeah, some extremely weird picks keep showing up here. In contrast, almost all of the TV shows you see trending on this list are Netflix originals 90% of the time.

Netflix is discovering what every media org figured out a decade or more ago, that reality TV is cheap, popular, and, in this new era, bingeable. Love is Blind, a show where two people get engaged before ever seeing each other, then are married a month later, has been near the top of the charts ever since it arrived. And I would guess that The Circle (another “people can’t see each other” Big Brother-style show) would have been similarly high if the Top 10 list was around when it was there. Expect a lot more reality shows from Netflix.

There’s probably more to delve into, but after two weeks, these are the kinds of patterns I’m seeing. The list changes daily and new shows and movies are released weekly, so we’ll see how this works in the longer term eventually.