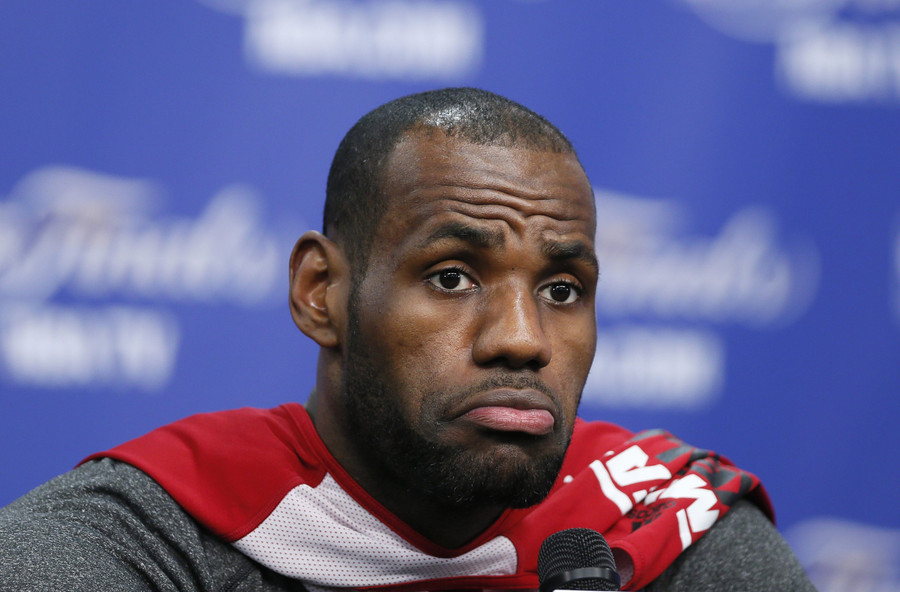 What’s next for LeBron James’ legacy?

Just like that, another NBA season has ended, with another finals between the Cavs and Golden State, and another head-to-head between LeBron James and the Warriors' ace team. However, if James acts on his free agency, next year may break the cycle – and be the first (in four years) where the Cavaliers don't go up against Golden State.

James is chasing Michael Jordan's past trophies and Golden State's present regalia: Matching Jordan's six rings is an ideal target. (Jordan won his final title at the age of 36, a milestone James will hit in three years.) Realistically, James has three seasons of MVP-caliber play left in him before a precipitous decline begins. If future championships are in his sight – which we're sure they are – he'll require a roster that features rising stars who can meet him on his way down, compensate for his inevitable basketball dotage and allow him to continue to compete into future seasons.

There are only a handful of teams who meet James’ specifications. Aside from Cleveland – his home – James seems uninterested in small market franchises. San Antonio is likely out of the running; New York and Golden State are reportedly on a list of teams James would consider. They’re on opposite sides of their respective championship windows, though: Golden State has no incentive to tinker with the Hamptons Five's chemistry, on or off the court, especially as Klay Thompson and Draymond Green approach contract years. Comparatively, although the Knicks may offer a boon to his brand, they don't meet any major specifications: Signing James during the homestretch of his career will require a flexible roster that won't have to gut its talent to meet his max contract demands.

In the immediate future, the only way he can catch up to Golden State's dynasty is by fighting fire with fire. Only a few franchises could truly provide him with the means to match their arsenal. The rubric below serves as a quantitative representation of James' interests – each scored from 1 to 5 (with 1 being the worst, and 5 being the best) on how the franchise fares in each category.

The Leaning Tower of Cleveland

Cleveland's roster was the NBA's equivalent of the smallest towers to gain global renown. Over time, though, its unstable foundation has become a burden James can no longer bear: The loss of Kyrie Irving and the failed Isiah Thomas experiment forced them to lean more on James.

However, placing the NBA’s second-worst defense on the back of one of its best offenses nearly halted their streak of Finals appearances this spring. If James is going to stay put, he’ll need a plan from the front office to prevent Cleveland’s Leaning Tower from toppling over and crushing his legacy. Cleveland probably offers the fewest chances for him to contend in 2019 and beyond among the options available to him, but his bond with the city and the franchise is deep. However, after winning an improbable title in 2016, he may also feel that his work is finished.

Boston Celtics: A New Beast in the East

The 2018 Conference Finals proved that Boston is nearly ready to dethrone the King. James has cultivated a reputation as a master super-team architect – as a result, he’d have to be intrigued by the interior design laid out by Danny Ainge and Brad Stevens’ day-to-day management. Points for practicality and brand.

The only downside for the Celtics is that acquiring James would require a sacrifice in the form of Kyrie Irving, Gordon Hayward or both. James would have to opt into the final year of his contract, in which he’d be due to earn $35.6 million. The irony of Boston trading Irving back to Cleveland would be astounding (but it won't happen). The only logical trade package is dealing Hayward, based on his multi-year deal and Boston's surplus of forwards. Irving is entering free agency in 2019 – and chaining Irving to James could drive him out of Boston.

However, given how much James and the Celtics have antagonized each other for a decade, potential backlash would be akin to what Kevin Durant received after moving to the Warriors.

The Sixers already possesses a towering lineup for James to join. Joel Embiid is 7'1; Ben Simmons towers at 6'11; Markelle Fultz is 6'4 with a 6'9 wingspan; Robert Covington is 6'9;  Dario Saric is a 6'10 scoring threat. Unfortunately, James would be the daycare center manager among Philadelphia's playoff neophytes.

Simmons is one of the few stars who can make a substantial impact with such rudimentary shot-making ability, but there may be a lack of floor-spacing shooters if he surrenders ball-handling duties to James. In the end, though, Simmons is the closest thing to a protégé James has in the NBA, and may be a strong pull.

Philadelphia could also imitate Houston’s partnership between Chris Paul and James Harden and stagger their minutes as offensive initiators. When they’re on the floor together, James would shift to the power wing instead of initiating the offense. (James began his career as a point guard, then manned the small forward position until Eric Spoelstra experimented with a small-ball lineup featuring James at power forward in spurts. As the average forward slimmed down, James has successfully bullied small ball power wings.) The power forward position is where he should end his career, and an all-world center in Embiid is what separates the Sixers – and perhaps James' future legacy – from the pack.

Houston Rockets: The Enemy of My Enemy is My Friend

Golden State is now the bane of James' existence – and, similarly, the Rockets' as well. Houston came the closest to bumping them from their pedestal in the Conference Finals, before Chris Paul's hamstring forced him to miss Games 6 and 7. A truce may be in order: James could the final engine required for their championship lift-off. But, Houston has its own free agent situation to deal with first: Locking down Paul to a long-term deal. While he's being squared away, Paul will also be recruiting his NBPA Vice President. Paul's presence will mitigate any friction between James, the nominal MVP, and actual MVP.

Similarly to Boston, James would have to opt-in for this scenario. Swapping out Ryan Anderson's final two years on his four-year $80 million deal and Eric Gordon’s economical four-year, $53 million contract would go a long ways toward clearing the path for a James trade. Houston’s space age offense would become even more reliant on isolation basketball as a consequence, but Paul, James and Harden are the best-equipped players in the league to make that style work.

The King of LA

Kawhi Leonard, Paul George, a robust crop of under-23 talent, depth, the brand name, Magic Johnson and Jeannie Buss, the weather and James' $23 million Hollywood mansion all point to a possible Lakers move.

Along with following in Magic Johnson's footsteps, Tinseltown provides James with better access to the entertainment industry. James is the co-founder of a production company called SpringHill Entertainment. In 2015, SpringHill signed a content deal with Warner Bros. Entertainment, and will reportedly produce a remake of the 90s hit "House Party." He's already executive produced a series on Starz that lasted for four seasons.

A stretchy lineup consisting of a 6'9 James, 6'9 point forward Brandon Ingram, 6'9 Paul George, 6'9 Kyle Kuzma, 6'5 Josh Hart and a 6'6 Lonzo Ball at point guard is the prototype for position-less basketball – and this doesn’t even factor in the rampant rumors about Kawhi Leonard’s preference for being traded to the Lakers. Surrounding James with the best two-way forwards in the NBA would give James the prerequisite talent necessary to immediately challenge the the Golden State dynasty. (The only issue is that, by being in the Western Conference, James will have to go up against Curry and his Warriors much earlier than the Finals.)

Only one franchise has a past, present and future that can offer everything James is searching for. The Lakers have 16 championships in their coffers, and aren't resting on their laurels anytime soon. Nothing is certain, but the options in Los Angeles are endless and the possibilities are boundless. If there was ever a frontrunner, Los Angeles is it.