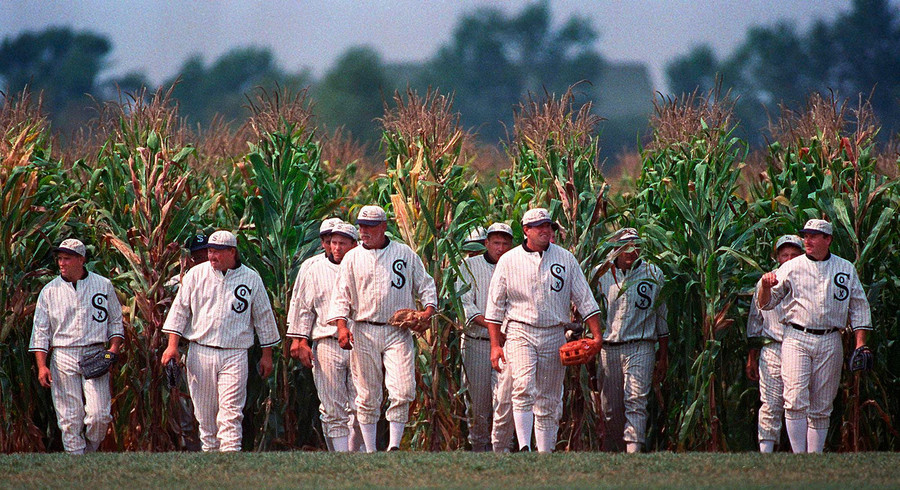 “If you build it, he will come,” is what a voice tells an Iowa corn farmer in the classic 1989 movie Field of Dreams.

More than 30 years after the wildly popular heartwarming film, a baseball field built right in the middle of an Iowa farm is the scene or MLB’s Field of Dreams Game between the New York Yankees and Chicago White Sox on Thursday, Aug. 12.

The setting, sites and sounds are worth watching, and FOX will televise the game with first pitch at 7:15 p.m. ET. Pre-game coverage on FS1 starting at 6:00 p.m. ET will include the players interacting with some of the movie cast slated to be on deck at the Field of Dreams Game, including star Kevin Costner.

The game is being played on a MLB-constructed field in Dyersville, Iowa. It’s next to the field where the iconic 1989 movie was filmed, and a pathway through the cornfield connects the two ballparks.

The Field of Dreams Game has attracted great interest and fans are paying record prices for an MLB game. Tickets to the 8,000 seat stadium are selling at an average price of more than $1,400 with a majority of seats selling on the secondary market this week for $1,000-$3,000, according to NewsTalk 1440 in Illinois. Front row seats are going for up to $13,500.

The White Sox and Yankees will wear uniforms inspired by those worn by the teams in the early twentieth century. The union of the game and the movie should make MLB at Field of Dreams a special event.

"This is more about the timeless nature of baseball, the universal appeal of the game," said Chicago Sun Times film critic Richard Roeper,

The White Sox will be a small favorite when odds are posted Wednesday night and Thursday morning. Chicago sends ace left-hander Carlos Rodon to the (cornfield) mound against Yankees newly-acquired lefty Andrew Heaney.

The White Sox (67-46) are dominating the AL Central Division on their way to pushing for the best record in the American League. The Yankees (62-50) are in third place in the AL East led by the Tampa Bay Rays. The Yankees are six games behind the Rays, and also trail the A’s and division rival Red Sox for a wild card playoff spot.

Yup, the Field of Dreams stadium is coming to MLB The Show 21 on August 10 in a free update. pic.twitter.com/TH2gQ5UTwT

At many leading online sportsbooks, the White Sox are currently +300 to win the AL Pennant and the Yankees are +800. Odds to win the World Series are White Sox +700 and Yankees +1600.

Carlos Rodon is in a 3-man race for the American League Cy Young award. His Cy Young odds have risen again this week and are currently +320 and just behind new favorite and teammate, Lance Lynn (-175). Yankees ace Gerrit Cole has been leading the Cy Young race most the season, but remains out the past month with injury and last week went on the COVID-IL list. Cole’s Cy Young odds have dropped to +400.

The 1989 Field of Dreams movie was based on the 1982 novel Shoeless Joe, by Canadian author W.P. Kinsella. It's a true story centered around Chicago White Sox outfielder "Shoeless" Joe Jackson, who was banned from Major League Baseball in 1920 after his involvement along with other teammates was uncovered for their role in the Black Sox scandal. Those players conspired with professional gamblers to ‘fix’ the outcome of the 1919 World Series, which the heavily-favored White Sox lost.

For three years starting in 1919, the World Series was a best-of-nine series. Baseball decided to try the format to increase the popularity of the sports and to generate more revenue.

Near the start of the 1919 World Series, the Chicago White Sox were 5/1 favorites over the Cincinnati Reds. But as rumors spread of a World Series fix, the odds shifted to 8/5 in favor of the Reds.

The significant play in Game 1 happened at the bottom of the first inning when pitcher Ed Cicotte of the Sox hit the Reds leadoff batter, signaling to gamblers that the fix was on.

Cincinnati would go on to win the World Series in eight games. Each Reds player received $5,207 while $3,254 was awarded to each White Sox player.

A year later, the 1919 World Series scandal was exposed and White Sox players admitted to their involvement in the scandal and seven ball players were suspended by the team.

The rule forcing players to disclose gambling information did not exist in 1919. Just over a year following the scandal, the first baseball Commissioner was named, and he placed eight players accused in the World Series scandal on the ‘ineligible list’. In August of 1921, those players were acquitted at a trial.

Commissioner Kenesaw Landis responded and said, “Regardless of the verdicts of juries, no player who entertains proposals or promises to throw a game, no player who sits in conference with a bunch of crooked players and gamblers where the ways and means of throwing games are discussed and does not promptly tell the club about it will ever play professional baseball.”

This article was written by Jay Ginsbach from Forbes and was legally licensed through the Industry Dive publisher network. Please direct all licensing questions to legal@industrydive.com.