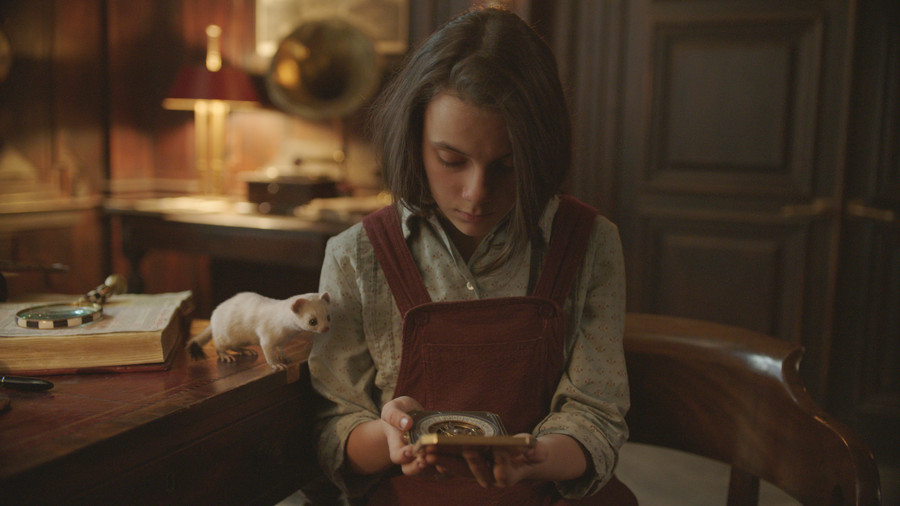 Why ‘His Dark Materials’ Mrs. Coulter is The Most Interesting Villain on TV

When the cast and creators of "His Dark Materials" appeared in a panel for the 2019 summer Television Critics Association press tour, star Dafne Keen said there is a moment in Philip Pullman's series where Ma Costa (Anne-Marie Duff) says to Lyra, "You're not water, you're marsh fire," which Keen said is the "perfect description" of her character.

Co-star Ruth Wilson immediately chimed in with, "My [character's] description was 'cesspit of moral filth.'"

That flippant remark is actually a fairly accurate summary of Wilson's Mrs. Marisa Coulter, but there are so many facets to the character beyond just "bad guy." Mrs. Coulter is a layered, captivating woman — and one of the most compelling villains on television right now. Here are three reasons why we love to hate-watch Mrs. Coulter.

**Spoilers ahead for the first season of "His Dark Materials."**

She is Utterly Enthralling

Some of TV and film's best villains are scariest despite the fact that they don't look scary. Wilson's Mrs. Coulter is an utterly beautiful, put-together woman who exudes grace and sexiness. There is something so intoxicating about her presence that when she's on the screen, it's hard to tear your gaze away from her. Coulter is also very aware of the effect she has on people and uses her beauty and mellifluous, throaty voice to her best advantage at all times — it's an almost supernatural effect that she has on friend and foe alike.

Her period aesthetic is not a coincidence. In both Pullman's book series and the show, there are easy parallels to draw between Coulter's employer, the Magisterium, and Germany's Third Reich — the shadowy organization is all about "oppression" and the "control" and "falsification" of information, executive director Jane Tranter told the TCA audience, and Mrs. Coulter's 1940s femme fatale is right at the heart of it.

But the most disturbing thing about Mrs. Coulter is that even though you know she's a cruel, manipulative villain, viewers still wait breathlessly for her to reappear on their screens. It's hard not to root for her on some level because Wilson makes her so enthralling and seductive — in fact, you could call her relationship with Lyra a seduction. Although she is trying to get Lyra to come over to the dark side, as she watches Mrs. Coulter command every room she enters, Lyra (and the audience) finds it difficult to say no.

She is Dangerously Quiet and Terrifyingly Powerful

Mrs. Coulter is a woman living and working in a man's world. While she may be the head of the General Oblation Board, she is also surrounded by men on all sides at the Magisterium. Therefore, she knows she must always keep her composure — women can't be seen as ever verging into hysteria or becoming too emotional, after all.

However, because she must keep her emotions in check at all times, there is a quiet intensity about Mrs. Coulter that makes her feel more dangerous than the average villain. It seems that at any moment, she could snap and lay waste to anything or anyone in her path. Wilson's performance is particularly grounded in what is not written in the script: It is the quiet moments of a cold smirk or a flick of her eyes when Mrs. Coulter is the scariest.

Even when it is revealed that Mrs. Coulter is Lyra's mother, there remains a coldness in her interactions with her daughter. Although she obviously has some modicum of feeling for Lyra, the general indifference she exudes is almost worse than if Mrs. Coulter outright despised Lyra. You constantly wonder at what point Mrs. Coulter will sacrifice her daughter for her cause, which leaves constant suspense and dread hovering over the series.

She is Ruthless and Power Hungry

In the first season of "His Dark Materials," Mrs. Coulter will stop at nothing to advance the beliefs of the Magisterium. As head of the General Oblation Board, she commands her forces to steal poor children from their families in order to experiment on their souls in the dark tundra of the North.

The "Gobblers," which is the boogeyman-like name given to the kidnappers by the children, perform an intercision on the children, which separates them from their daemons in an effort to free children from original sin. When performed successfully, the children and their animal companions become lifeless and dull, a fate worse than death in the parallel universe of the show. (Think about the Dementor's Kiss from the "Harry Potter" Series.)

Mrs. Coulter is the mastermind behind the operation and uses her beauty and charm to entice innocent children away from their families, and it seems as though she's doing it all in the name of gaining more power within the Magisterium.

In season 2, viewers can certainly look forward to finding out more about Mrs. Coulter's real motivations. "I have really enjoyed this job because there’s so much mystery to her,” Wilson told Entertainment Weekly in an interview. “She’s quite enigmatic. In the books, you never get to know her at all. She comes in and she’s a bit like the White Witch in the 'Chronicles of Narnia.' She comes in and does something ghastly and leaves again. You’re always confused by what her motives are and who she really is.”

But on the show, writers and actors have been given creative license to really explore what makes Mrs. Coulter tick.

"Philip Pullman has given us more license to do that, which is really great. He’s allowed us to dig more into her and to examine why she is who she is and why she makes those decisions and why she does the awful things she does. It’s a huge journey for her to go on throughout the seasons," said Wilson.

"His Dark Materials" returns for its second season on Monday, November 16 at 9 p.m. ET/PT on HBO.