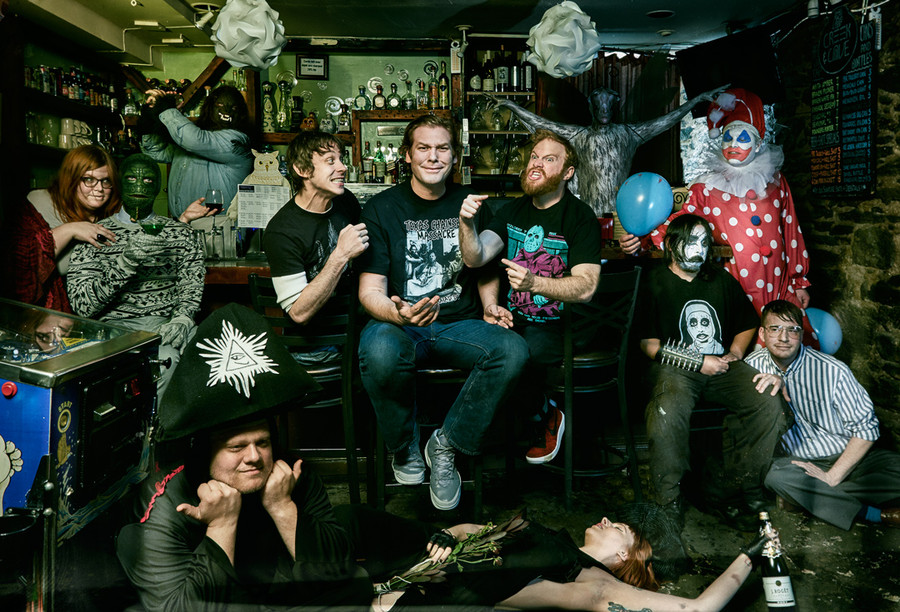 Comedy-horror program "Last Podcast on the Left" announced in October it will no longer be exclusive to Spotify, becoming the second podcast to exit such a deal.

The move is a sign of the growing competition for talent in the podcast space as audience streaming sites work to draw larger audiences.

"Last Podcast on the Left," a comedy podcast about conspiracy theories concerning aliens and other topics, had been exclusive to Spotify since February 2020.

But starting next year the popular show will be widely available on multiple platforms for free.

The podcast has entered a three-year deal with SiriusXM-owned podcast platform Stitcher to manage audio and video ad sales on its podcasts. As part of the agreement, "Last Podcast on the Left" will also launch a live weekly radio show on SiriusXM's "Faction Talk."

"It's been really sweet, we've learned a lot from [Spotify], but then we got an opportunity to go wide again," host Henry Zebrowski said in an interview.

"We're on all the tubes and we're excited about that."

Financial terms of the three-year agreement were not disclosed.

Zebrowski declined to say how large the podcast's audience is but noted that it draws crowds when it goes on tour, including recently having 3,000 attendees at its live show in Los Angeles.

"Last Podcast on the Left" had 2.5 million downloads per week in 2019, prior to when it joined Spotify exclusively, according to SiriusXM.

As more podcast platforms battle for top talent, podcast hosts need to weigh what is best for their brands: Sign a lucrative deal with one platform exclusively, or distribute their podcasts across multiple platforms and make money through ads and live shows.

"There are points in the creators' careers where that balance may shift, where they actually can generate even more than they were guaranteed in those exclusive deals, by being independent," said Mike Chapman, a partner at management consulting firm Kearney. "But right now the trend is the podcasting platforms are paying a lot more money to the content creators than their podcasts generate at the time of those deals."

The U.S. audience for podcasts continues to grow, reaching about 80 million Americans, up 17% from last year, according to a report released in March by Edison Research and Triton Digital. Revenue from podcast advertising rose 19% to $842 million last year, compared with 2019, according to an IAB study prepared by business advisory services firm PwC.

"Last Podcast on the Left" is the second podcast to leave its exclusive status to Spotify, following Joe Budden's exiting his exclusive agreement after both sides could not come to an agreement on terms. At the time, Budden said his show was undervalued.

During its time at Spotify, the hosts at "Last Podcast on the Left" said their audience grew on the platform and the podcast will remain on Spotify although it won't be exclusive to the streaming service starting next year.

The Swedish music streaming giant has been aggressively expanding its footprint in the podcast industry through acquisitions and deals.

The company has signed exclusive podcasts featuring popular talent including "The Joe Rogan Experience," "The Michelle Obama Podcast, and the advice and comedy program "Call Her Daddy." Joe Rogan's deal to license his video and audio podcast was worth roughly $100 million. Spotify as of last month had about 1,000 original and exclusive podcast shows.

"There are tent-pole projects that oftentimes bring people into the platform, and also into podcasting," Dawn Ostroff, Spotify's chief content officer and advertising business officer, at the Information's Women in Tech, Media and Finance Summit last week. "It's sort of the buzzier of shows, people hearing about something and they want to check it out."

The company, which has 365 million monthly active users, has also acquired podcast production companies over the years, including Gimlet Media. Earlier this month, the host of popular Gimlet podcast "Heavyweight" told his listeners in an ad that it would be moving to Spotify exclusively on Nov. 18.

"Last Podcast on the Left" began in 2011 as a conversation between friends who love horror movies. The name was inspired by horror movie "The Last House on the Left." The podcast's discussions, hosted by Ben Kissel, Marcus Parks and Zebrowski have delved into topics including aliens, cryptids and other macabre topics.

By joining with Stitcher, the SiriusXM subsidiary manages the video and audio advertising deals associated with the podcast. Stitcher's premium subscribers will also get access to ad-free episodes of the podcast.

The comedy-horror podcast fits in well with the company's "already robust roster" in those areas across its platforms SiriusXM, Pandora and Stitcher, said Megan Liberman, senior vice president of SiriusXM's talk programming.

"It will give listeners an opportunity to hear them in a new medium while also introducing our audience to them for maybe the first time," Liberman said in an email.

SiriusXM, known for satellite radio shows, has been investing in the podcast business, expanding its presence when it bought Stitcher last year for about $325 million. It also acquired Roman Mars' 99% Invisible podcast earlier this year.

On Oct. 11, SiriusXM said it led a new $12 million funding round for L.A. podcast production company Audio Up, and Sirius XM Radio announced an agreement with Audio Up to create original scripted podcasts.

This article was written by Wendy Lee from the Los Angeles Times and was legally licensed via the Tribune Content Agency through the Industry Dive publisher network. Please direct all licensing questions to legal@industrydive.com.

We're closing out Hispanic Heritage Month and welcoming Halloween with ...

With Spooky Season Upon Us, Here Are Horror Films for Any Mood

We’re well into October, which has been collectively recognized as ...

Best Halloween TV Specials and Where to Stream Them

Halloween-themed TV specials are an essential part of Halloween. Sure, ...

Dressing up can always be fun — whether or not ...