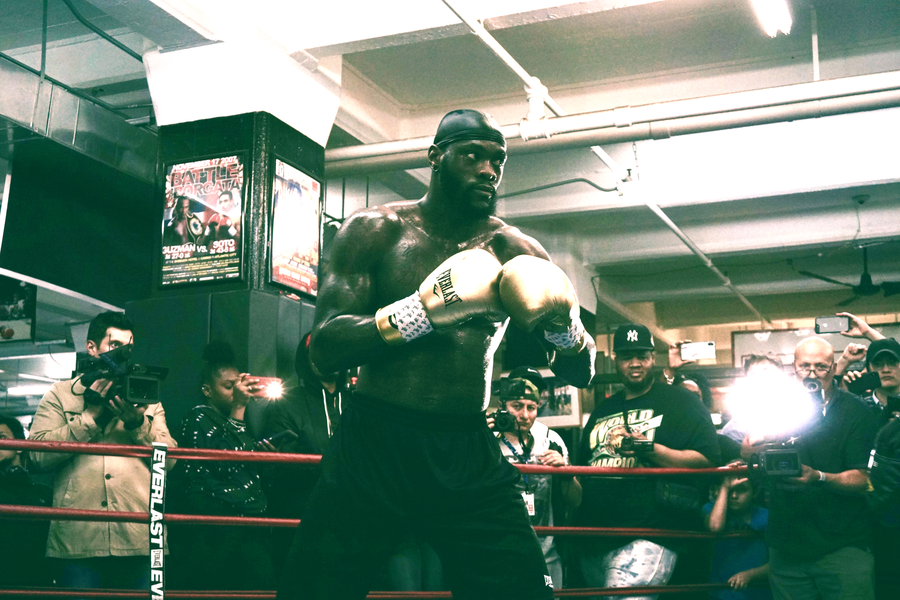 Wilder vs. Breazeale: The Champ in Brooklyn

The hulking figure of Deontay Wilder moves in ellipses across the blue apron of the ring. Sweat pours off the tattooed back of the WBC Heavyweight Champion. He wears a do-rag wrapped tightly over his head. He wears golden boxing gloves, standard gym shorts and boxing boots. He is all business. He is doing rounds hitting the pads held by trainers. The trainers switch after a couple of rounds each, presumably because their hands are still feeling the effect of Wilder's pulverizing power. When he delivers a blow, the mitts make a loud popping sound that coincides with a kind of karate grunt from the champ: “Kah! Kah! Kah!” 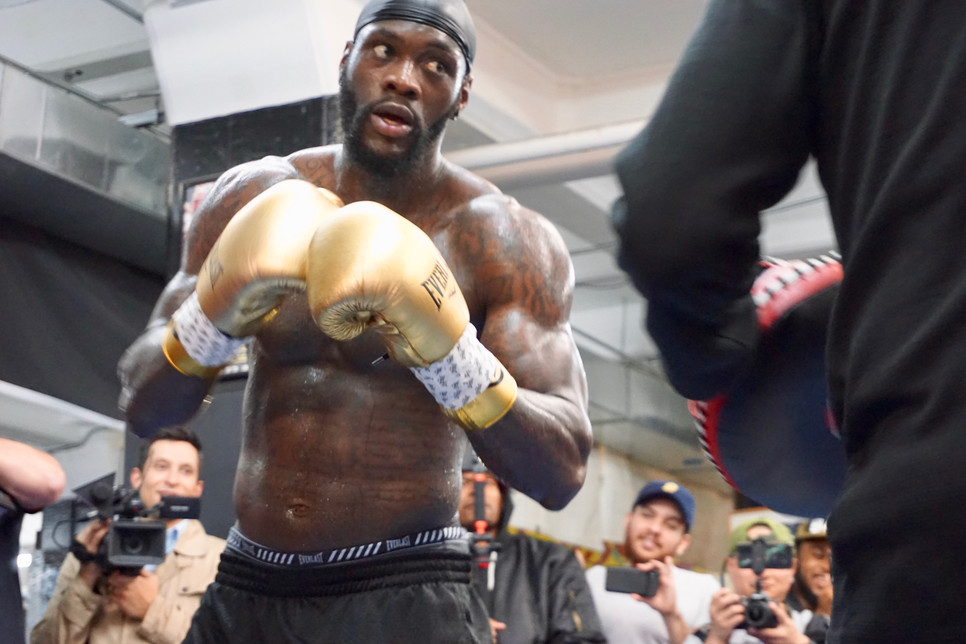 Gleason’s Gym sits along the Brooklyn waterfront on the East River. It is a legendary destination for the world’s greatest fighters. Over the years, it has hosted figures such as Jake LaMotta, Muhammad Ali, Robert Duran, Julio Cesar Chavez, Larry Holmes, and numberless other champions. But it also serves as a training gym for regular New Yorkers, regardless of their boxing pedigree, or lack of it. In the rings around the Wilder camp, unknown boxers hit the mitts, women and men tag the heavy bags, and one ring even features amateur wrestlers sharpening their skills. All this gives the gym a proletarian air, though the walls are decorated with old fighter posters and framed photos of boxing royalty--inspiration for the current generation. But all the assembled media are swarmed around the champ, leaning in on the ropes of the ring, teetering on the apron with cameras held aloft, shouldered video cams and raised iPhones, anxious to capture a few good images for quick posting on their social channels.

It’s good that Wilder’s opponent on Saturday night, Dominic Breazeale (20-1-0, 18 KOs), isn’t watching this final training workout by the champion. Wilder cuts a fierce figure in the ring, a fighter of singular determination. But then, a man like Breazeale wouldn’t be alarmed. As a Top-5 ranked WBC contender, he has been in the trenches, and come out the other side, perhaps bruised and slightly battered, but more often than not, victorious. At 6’7” and 256 pounds, he doesn’t scare easily. But neither does Wilder, who also stands 6'7" and carries one of the most chiseled physiques in the heavyweight division. 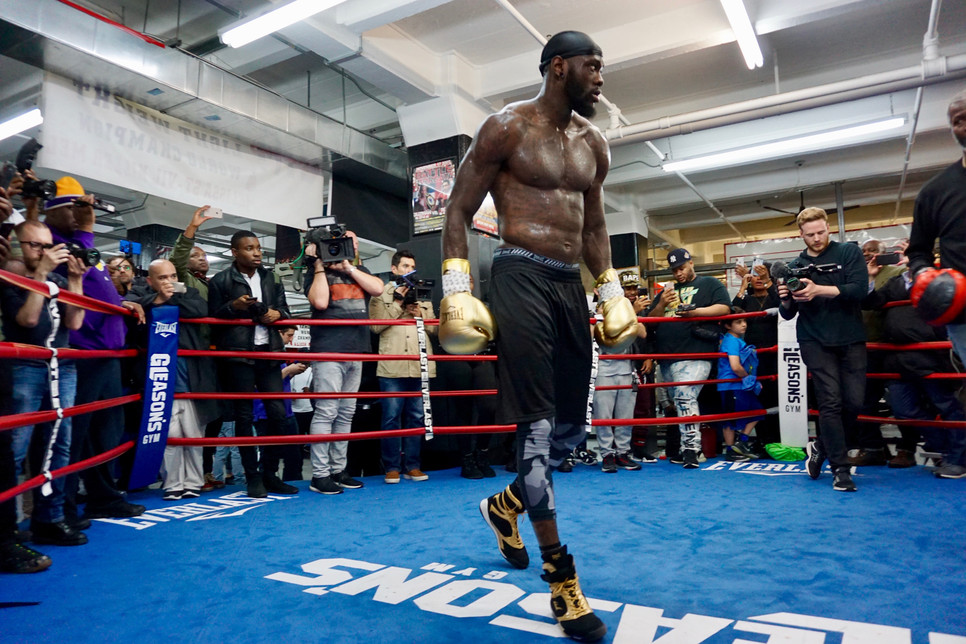 At one point in the training session, the mitts are managed by Mark Breeland, former welterweight champion and Olympic gold medalist. Wilder feels a special bond with fellow Olympians, and calls them “my Olympic brothers”. The champion's nickname, “The Bronze Bomber” is a play on the longtime label of the power-hitting, Bronx-based New York Yankees, known as the Bronx Bombers, but it also refers to the bronze medal Wilder won at the 2008 Beijing Olympic Games.

As the workout dials down, Wilder moves to his corner and his assembled crew, called the “Bomb Squad”, all chant in unison, “Breazeale, you want it, you got it!” Then Wilder has his gloves removed and remarks, with a measure of relief, “I’m home, baby. I’m home.” The months of hard body work, tactical training, and psychological motivation, are done. All that remains is the business of the fight. The final press conference on Thursday, a mandatory weigh-in on Friday, and the main event Saturday night at Barclays Center in Brooklyn. Feeling relaxed, finished with his preparations, Wilder welcomes his young daughter into the ring. 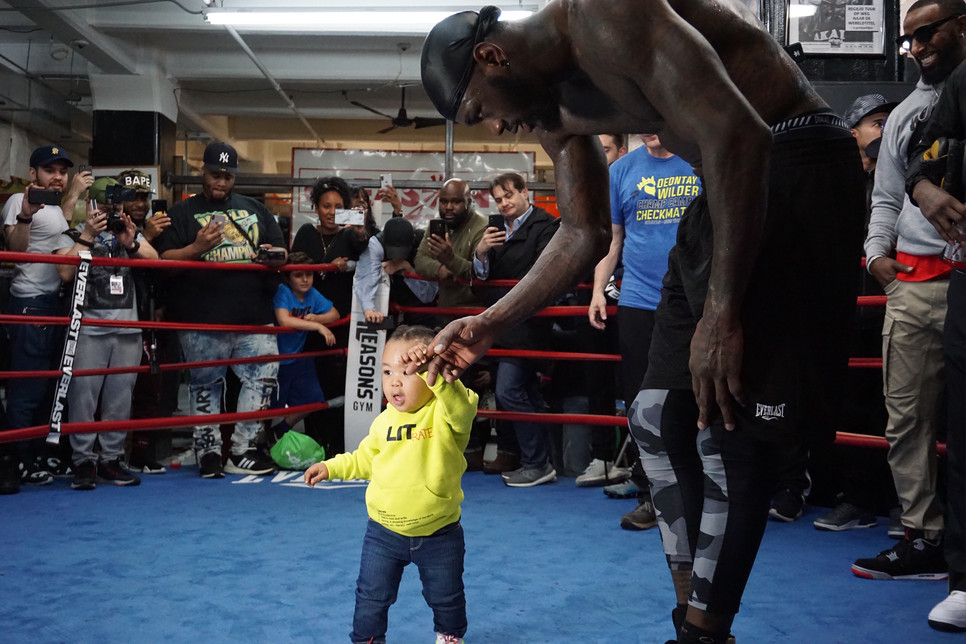 The child wobbles toward her father, who is delighted to have his family on hand. The contrast between the thudding power and size of the champion and the smallness and delicacy of his daughter is immense. It is a rare moment when the fighter shifts his focus away from the looming battle, a brief respite from the cacophony of media noise that will accompany the champion into the ring.

Check back tomorrow for a look at challenger Dominic Breazeale, as well as WBC Featherweight Champion Gary Russell Jr. (29-1, 17 KOs), who will face off against former world champion Kiko Martinez (39-8-2, 28 KOs) on Saturday night's undercard.