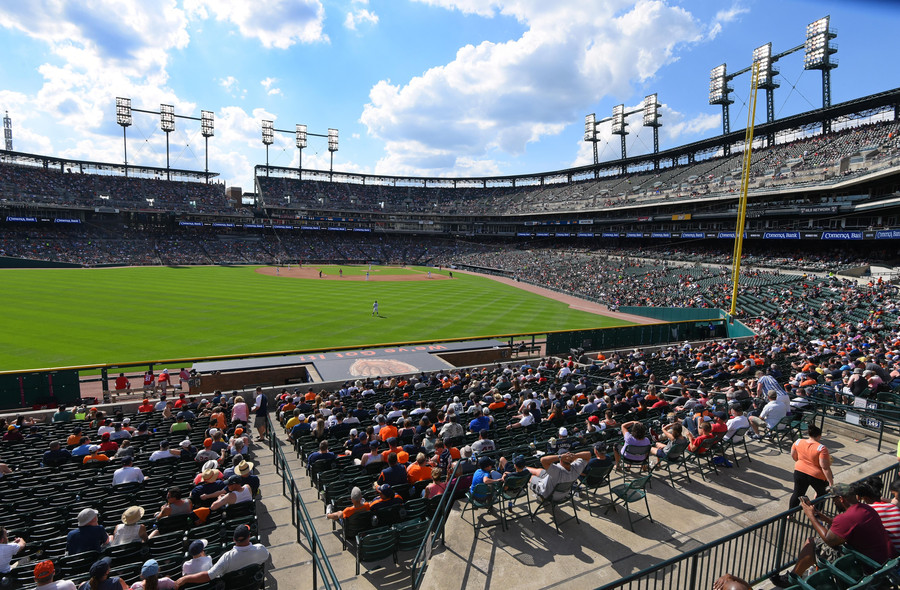 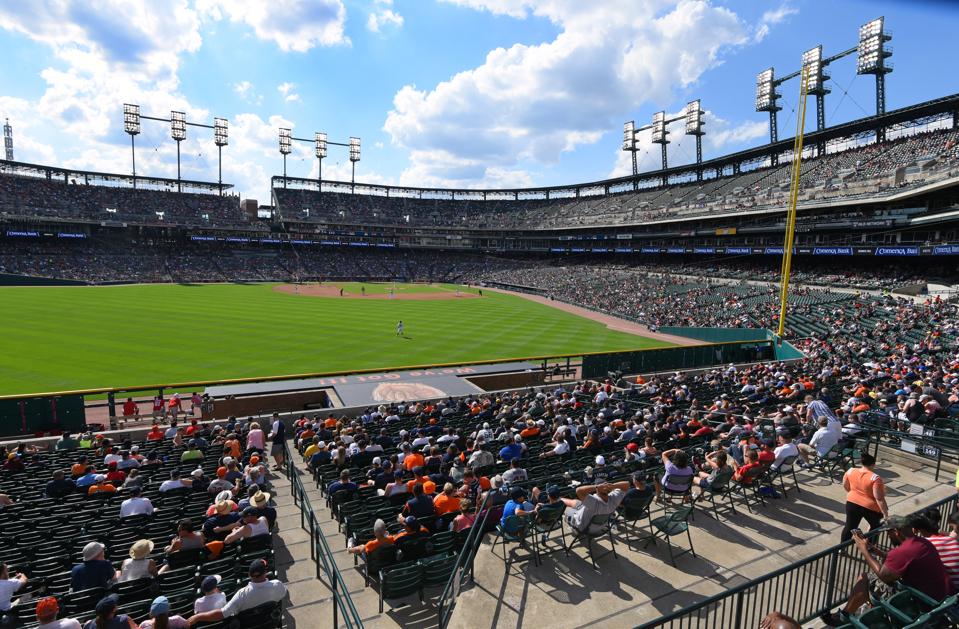 Will fans be returning to the ballpark in 2021? That's just one of the questions about how MLB could change this year. (Photo by Mark Cunningham/MLB Photos via Getty Images)

If 2020 showed us anything, it was that you can never be too prepared for unpredictability. All parts of everyday life were upended by the coronavirus pandemic.

What came out of that unpredictability will drive how your job, social gatherings and entertainment will be adjusted in 2021. As vaccinations slowly make their way into the general public, so too will businesses that depend on large gatherings of people try to balance the transition.

Predicting the sports world in normal times can be an exercise in futility, which makes predicting how the landscape will be in 2021 even more difficult. Still, some indicators shed light on what to expect as the year gets underway.

Spring Training — With Or Without Fans — Should Start On Time

The league has created the spring-training and regular-season schedules. The union for the players is planning on spring training. So why say that spring training should start on time rather than will start on time? The plain and simple answer is, no one knows how the pandemic will be trending in March. No one knows how the vaccine rollout will go. That puts the onus on the states of Arizona and Florida, where games are played.

“We have announced the dates for the start of Spring Training and the Championship Season,” MLB said in a statement to the Athletic. “As we get closer we will, in consultation with public health authorities, our medical experts, and the Players Association, determine whether any modifications should be considered in light of the current surge in Covid-19 cases and the challenges we faced in 2020 completing a 60-game season in a sport that plays every day.”

So one option for spring training could be a shortened schedule, like we saw in 2020 with Spring Training 2.0; it could also start on time but with no fans, or it could be a traditional full-length schedule with fans in the stands.

Will The Toronto Blue Jays Play In Buffalo Again?

This may be the most difficult question to answer heading into the season. The U.S. has been very lax in how it approached social distancing depending on what state you live in. Canada has blocked travel in and out of the U.S., so the ability for the Blue Jays to host games in Rogers Centre is, once again, a looming question. Given the position that the Canadian government has taken on travel restrictions, odds are that some or all of the Blue Jays games could be played in the U.S. again in 2021.

The MLB Players Association has a solid case to make when they say that based on the CBA, they plan on playing the full 162 games in 2021. The league proved and the union’s thinking is if they could do 60 games last season and there’s no reason to think that with the vaccine on the way that can’t pull off 162 in 2021.

“We’ve seen anonymous quotes attributed to club sources casting doubt on the start date and length of the season,” Bruce Meyer, the MLBPA’s senior director of collective bargaining and legal, said last month. “To be clear, and as we’ve made clear to the league, players are planning on showing up for spring training on time for a full 162-game season as outlined in the collective bargaining agreement and the league’s previously issued schedule.”

Commissioner Rob Manfred could try and say that given the pandemic he could use emergency powers to get into a shortened season but that would immediately trigger a grievance from the union. Given that the MLBPA is already said they had their eyes on a grievance for last season with the unilateral 60-game schedule handed down by Manfred, the union would have a strong case.

The variable would be playing 162 games in a shorter timeframe through the use of 7-inning doubleheaders. The use of doubleheaders was used in 2020, would allow the league to potentially see fans in the stands for more games if the vaccine rollout allows for it, while at the same time ensure the players perform over the 162-game season as defined in the labor agreement.

More and more, businesses are talking about how to transition from the socially distanced pandemic world to something closer to pre-pandemic life through vaccination and herd immunity.

The sports world is part of that equation, and MLB is no exception. The league is looking at ways to bring fans back safely with one method being monitored closely being proof of vaccination or negative Covid-19 testing.

For entertainment, the giant ticket distributor Ticketmaster is planning to work with companies like CLEAR or IBM IBM with its mobile or online ticketing service. Both companies provide health pass services that address HIPAA. For the Olympics, Prime Minister Yoshihide Suga of Japan that vaccinations would likely be required for both athletes and fans who wished to attend. And international travel will almost certainly come with “vaccine passports” of some type.

So, it seems likely that either league-wide or on a per club basis the use of showing some form of herd immunity could take place.

Is The Universal DH Here For Good?

Pitchers didn’t hit in the National League in 2020 and questions remain whether that will be the case in 2021. Both the owners and players are not averse to the idea, but the question remains: if the season is played under the current collective bargaining agreement, could the modification take place? Like moving to more doubleheaders, it would be an adjustment to the labor deal.

Will There Be Expanded Playoffs In 2021?

Like the universal designated hitter, the league saw the use of expanded playoffs in 2020 which allowed teams like the Marlins and Brewers to get postseason games in. The Wild Card Series was largely seen as a positive given the pandemic, but the question remains whether the current CBA would allow expanded playoffs? If the players have to trade a shorter season for a percentage of the Wild Card Series broadcast revenues, it seems obvious from Bruce Meyer’s past comments that the full season is financially a better path for the players that expanded playoffs.

The NHL has reached a deal with sponsor decals on helmets, and MLB has talked about sponsor patches like the NBA and helmet decals as a way to bring in additional revenue. Helmet decals were used during MLB’s 2019 London games, and if not for the pandemic canceling games there in 2020, would have done so again.

While the league’s owners would certainly love to see the additional revenue come in for 2021, expect them in 2022 when a new CBA is reached.

No, it’s not a factor in 2021 broadcasts, but it’s a big issue the league needs to address this year. FOX renewed their national broadcast deal. Ditto for Turner’s TBS. The open question has been, when will ESPN renew?

Multiple reports have now said that ESPN will walk away from their Monday and Wednesday games and focus just on Sunday Night Baseball. According to the Sports Business Journal, the league has been unable to broker FOX or TBS picking up the slack, and streaming partners see the asking price as too high. Somehow, someway, the Monday and Wednesday games will air when the current national deals expire at the end of the upcoming season. But the league may be forced to back down on the asking price, or sweeten the pot by getting any future expanded playoff games in the mix should that be reached as part of the next labor deal.

Could The Next Labor Deal Be Pushed Out?

Speaking of that labor deal. …

The mini-agreement that the league and MLBPA reached to allow the pandemic-shortened 60-day season to take place in 2020 was anything but smooth. Not since the 1990s was their open warring between the sides through the media. With the 2021 season having so many questions and the potential for additional negotiations around it, the bargaining sessions for a new labor deal become all the more difficult given the expiration of the current CBA in December. While fans have wondered whether there could be a lockout or strike, it’s very possible that the two sides could agree to simply extend the current labor deal out into early 2022 to allow time for the pandemic landscape to abate. The key figures in Manfred, deputy commissioner Dan Halem, MLBPA executive director Tony Clark, and MLBPA chief labor lawyer Meyer have not said extending the current labor deal is in the cards, but they haven’t ruled it out completely. Only as the year moves forward will this option become clearer.

This article was written by Maury Brown from Forbes and was legally licensed through the Industry Dive publisher network. Please direct all licensing questions to legal@industrydive.com.