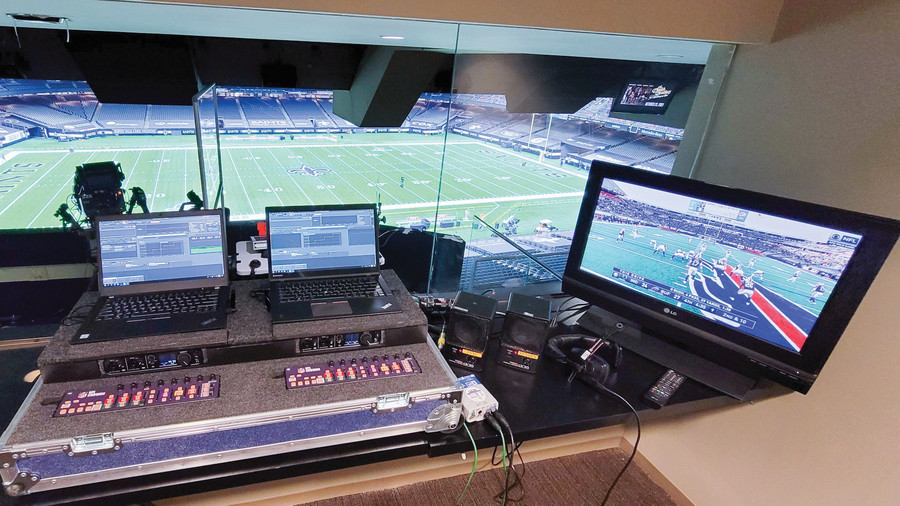 BALTIMORE — As the worldwide COVID-19 shutdown moves towards the one-year mark, Scott Pray recalled what was happening in March 2020 in the sports world, and in particular, sports audio.

“Last April, the lead audio representatives of all of the networks were really against doing anything artificial,” said Pray, audio director for ESPN. “We’ve since changed our views. Our goal has always been to bring a good viewing and listening experience to the viewers; that now means they want the broadcast they saw pre-pandemic.

“So our approach,” he added, “has been to try to replicate that experience as best we can.”

At the start of the pandemic, Pray said that he and his colleagues “initially forgot” that adding crowd sounds meant they were “simply doing their jobs.”

“That’s what happened when we were in the ‘NBA bubble’ for 95 days, [working in] the three [smaller-than-average NBA) arenas” at the ESPN Wide World of Sports Complex just outside of Orlando.

Notably, since no fans were on hand, the actual sounds of the game reached the air — including the colorful language. “We went to a five-second delay to deal with that issue, but otherwise we tried not to vary our approach too much,” Pray said. “When we used crowd noise, it was incorporated from each team’s regular arena into the broadcast, as the NFL does.”

However, Pray said while the NBA and NFL have both added sound, each league does so in different ways. For the NBA, the home arena sound is delivered into the arena, “but ESPN also takes a second feed to add to the broadcast mix,” he said.

That’s different for NFL broadcasts. "In that case, there is a crowd murmur from the stadium feed,” Pray said. “Then the NFL takes a second stream with audio from the home team stadium, which is a separate feed. On ‘Monday Night Football,’ we had our A1 mixer executing commands for the different crowd sounds and adjusting levels for various game action,” such as touchdowns or penalty calls.

NFL Films “provided the systems for most playbacks and we accepted it in 5.1 format and mixed it into the MNF broadcast,” said Pray, “but in the NBA bubble, Firehouse Productions provided six teams of two mixers each, one for the home team and one for the visitor, and would feed the sound to us in 5.1. We also had an in-house disc jockey to enhance our presentation and make it more familiar” for the fans.

Ahead of the game

The concept of adding crowd noise to a broadcast was initially broached several years ago to Fox Sports by an audio mixer from Southern California, but wasn’t implemented until it suddenly became a need, not an option.

The man behind the idea was Fred Vogler, president of Los Angeles-based Sonofans, who finally found his opportunity in the pandemic.

“Given the fanless sporting events, we thought that good crowd audio could enhance productions, so we proceeded with Fred, the NFL and NFL Films, which had also considered this approach,” said Michael Davies, senior vice president, field and tech operations for Fox Sports. 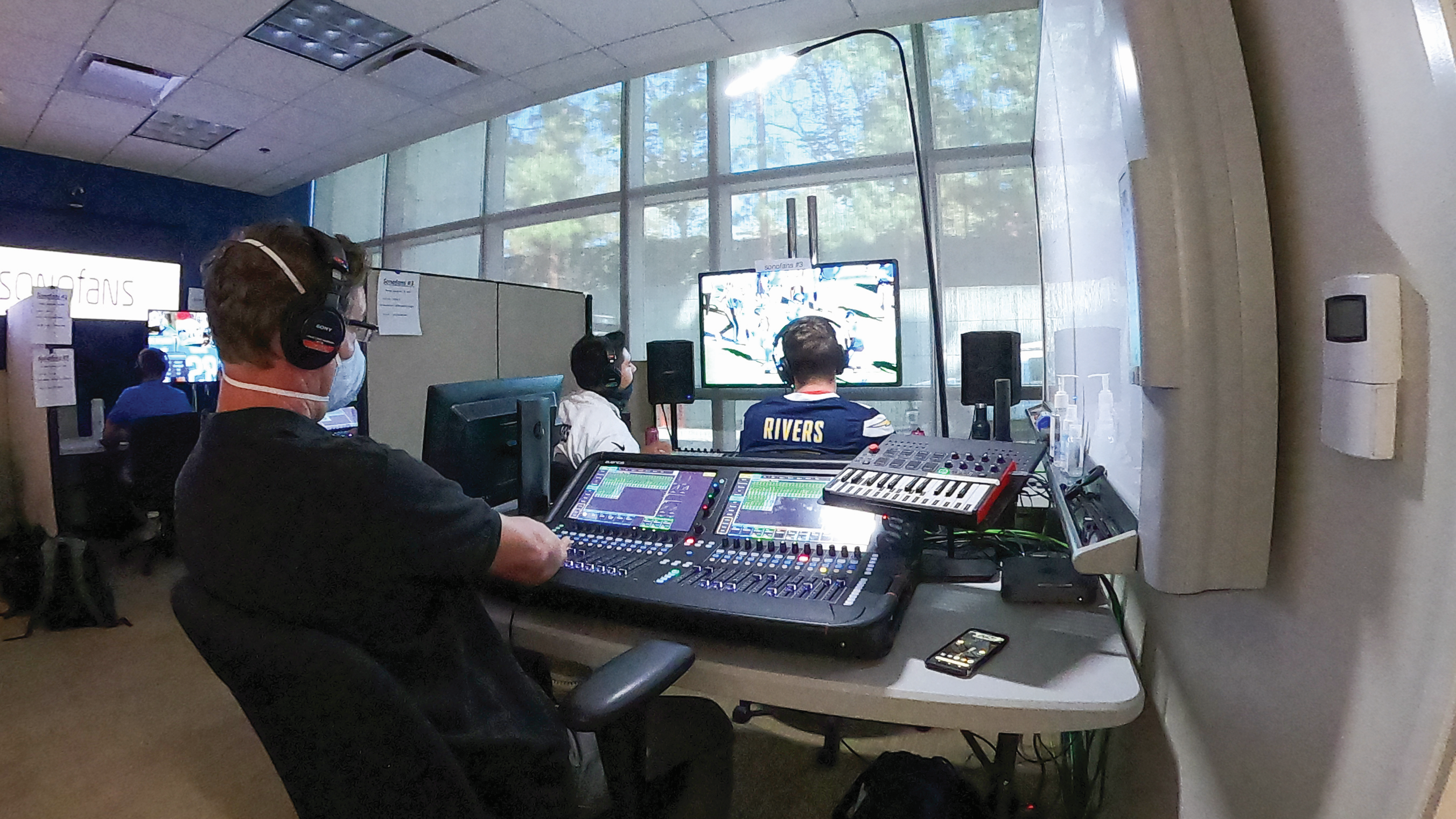 Overall, said Davies, “the response has been very positive, so we [previously] added it onsite to our MLB, boxing, soccer and NCAA football coverage, with Sonofans curating various sounds for each sport from our four or five mixing stations.”

For the “NFL on Fox,” the balance varies with each situation. “We score a game as you would a new movie with music, which takes special skills. Events on the field need a [manual] interpreter to find the correct response,” he said. “That’s taken some getting used to, but folks have gotten very, very good at this.”

As for actual crowds, which have been as high as 25% capacity, the fans “can become pretty vocal and make up for the 75% who are missing,” said Davies. “Still, we need to figure out the right balance, because we didn’t want to mow over the real sounds in favor of what’s curated.”

Like ESPN, Fox also incorporated the crowd murmur, or “walla” sound effect. “When the ‘walla’ was not as notable as it normally is,” he said, “we filled in the dead spots with the curated sounds.”

There are two levels to the mix. “One is from the A1 mixer in the truck, who handles the usual field effects, announcers and music; then we feed the crowd in at very low latency from our L.A. broadcast center so [the mixer] can implement what they deem necessary — such as when a penalty call goes against the home team,” said Davies, adding, “That can be odd, however, if the opposing team has a large number of fans in the seats. That happens fairly often during NCAA football telecasts.”

Although Davies characterized mixing sounds in the current environment as “complex,” he’s already seen an evolution.

“We’re constantly hunting out new sounds and tools in the tool box, so our mixers can get the most authentic reaction,” he said. “There was even some thought of going all virtual with the sound, with a kind of noise floor during the baseball postseason, even to the point of pumping it into the stadium.”

And as Pray pointed out, “with no crowd, you can hear the field effects more [to the degree that it resembles] almost a studio environment,” Davies said, “but while the mic distribution plan didn’t really change, how we mix did. For instance, during the latter games of the World Series and in working with NFL Films, we relied on NFL Films to mic certain players — not so much for people talking, but for the effects.”

Sometimes, that hasn’t been necessary. “The one thing we leaned into in the second half of the NFL season was the sound coming off the field,” said Fred Gaudelli, executive producer of “NBC Sunday Night Football.” “Because there’s [virtually] no one in the stadium, those sounds were heard in a way that came through loud and clear. We were hearing things that you would have never, ever heard before.” 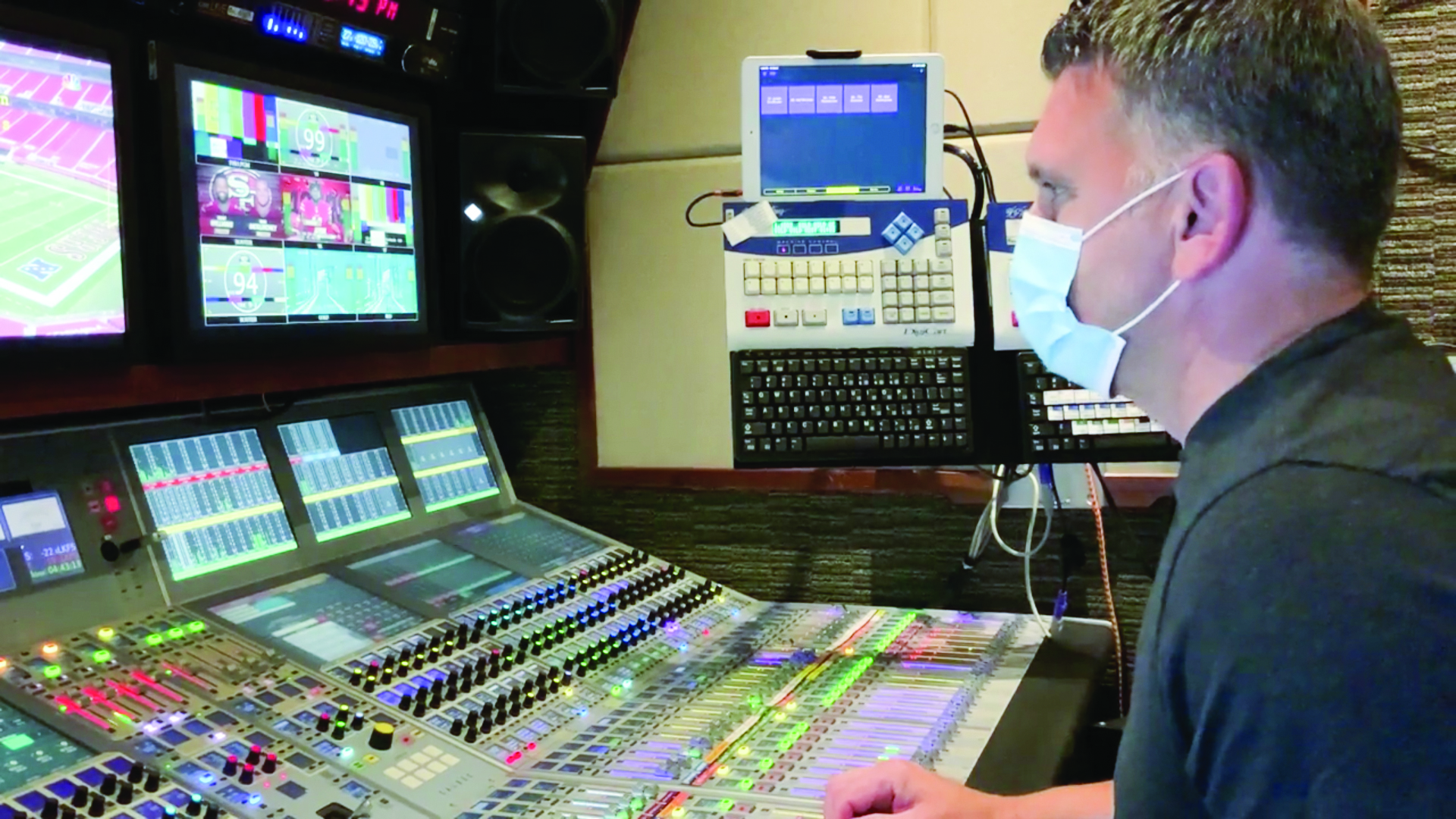 Mike Francis, vice president of remote engineering for CBS Sports, said that sound accents of a game come not only from the fans and players, but from other influences, too. “The 32 [NFL] venues are all different animals in relation to acoustics, which the crowd can generally equalize,” he said.

With NFL Films providing a home crowd mix for all of the networks, Francis said the balance of mixing the live and artificial crowds “has been educational and challenging, partially because it masks the acoustic issues in a given stadium. That’s hard to handle on an architectural level.”

That issue even extends to announcers, who he said “feed off the crowd.”

“Early on, we were tentative in how much stadium sound we gave [the talent], but many of them wanted as much as they could get to provide energy for their call,” Francis said. “Each has their own preferences for the decibel level and just how much crowd they want to hear in their headset.”

On the technology side, CBS broadcast up to eight NFL games a day, with Calrec the audio console of choice. Microphone acquisition is a combination of the Calrec Hydra II, Dante audio-over-IP “and some good, old-fashioned analog copper, in case something goes wrong,” Francis said.

“The technical interfaces are between CBS’s main mixer in its truck and its audio quality control team in its broadcast center in New York, which interacts with the NFL Films crowd mixer to ensure that the audio matches the events on the field,” he added. “They’re able to note the subtleties that come from football intelligence.”

What CBS did during the NFL playoffs depended on the venue. “That’s because 15,000 people in Arrowhead Stadium in Kansas City may sound like 30,000 in another stadium,” Francis said. And repeating venues in the playoffs is helpful to keep everyone on the same page.”

Changes CBS, which is broadcasting Super Bowl LV, made for the postseason included repositioning parabolic mics on the field “due to the expansion of the benches for social distancing, which has made them harder to fit in the right spot; the sounds can be pretty shocking,” said Francis. “It’s audio you might not have heard before.”

This article was written by Mark R. Smith from TV Technology and was legally licensed through the Industry Dive publisher network. Please direct all licensing questions to legal@industrydive.com.