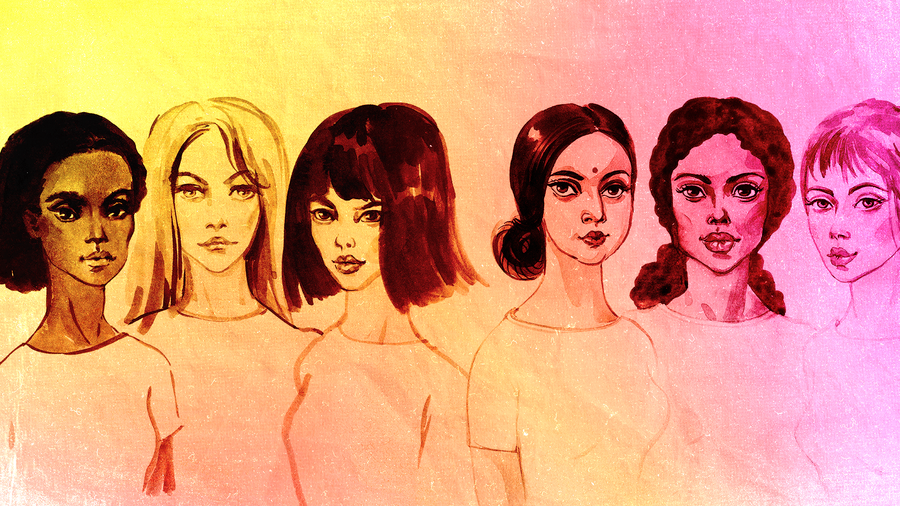 Women on TV: they feud, they gossip, they fight in a lilypond. Until now. In recent years, media has started to come around to the idea that catfights are played out. Maybe it's even more fun to watch incredible women supporting each other.

Friends and Sex and the City are at least partly responsible for ushering in our era of powerful, mutually-supportive women. Since then, the trend has only gathered steam—a fact not lost on the women making and starring in television.

Megan Hilty, who starred as Patsy Cline in a recent TV movie about real-life BFFs Cline and Loretta Lynn (played by Jessie Mueller), reflected on these shifts for the 2019 Television Critics Association summer press tour audience. She called her new project a refreshing change from starring on Smash, where her character spent two seasons locked in competition with another woman.

"While I am incredibly grateful for Smash and everything that came with that show ... it is a breath of fresh air to work on something that shows the wonderful aspects of female friendship," said Hilty, adding, "There are ups and downs, but the storyline doesn't have to be fueled by conflict to be interesting. And I feel like it's so rarely done and I'm so proud to be a part of something now that is showcasing that, and hopefully, that possibly starts to shed a new light on how other films and TV shows are made. That women don't have to be at war with each other to be interesting."

That's right, Megan Hilty. Women don't have to be at war with each other to be interesting. And looking at the current TV landscape, we were pleasantly surprised to find so many examples of women celebrating and supporting each other.

Here are a few:

A joint venture between the Canadian Broadcasting Corporation and U.S. channel IFC, Baroness Von Sketch Show stars four comedians writing and performing sketches about their lives as 40-something women in Canada.

"I always feel, as a woman in my 40s, being able to work with these other women and create the content that we're creating, I don’t take that for granted, at all, especially in this climate. What we’re allowed to do is incredible," said star Meredith MacNeill.

The stars added that they've all heard some version of the line that women can't be funny, a notion they reject 100 percent. In fact, they think that it's an exciting time in comedy because of all the fresh, new voices, including funny women.

"Being able to speak, and have our voices, I think is really important. And I think with the diversity to the earlier question of all this sketch coming out, is I think there’s a lot of people who have really interesting voices that we've not heard that now we’re getting to hear. So I think it’s more a conversation of we’re all funny, we’ve just — our culture has been from one angle for so long," said star Jennifer Whalen.

One of the shows in particular that Whalen named was actually a brand-new sketch show called...

HBO recently debuted this comedy series starring Robin Thede, Ashley Nicole Black, Gabrielle Dennis and Quinta Brunson. The four leads are joined by high-wattage guest stars that include Laverne Cox, Angela Bassett, Kelly Rowland, Nicole Byer and more. The leading ladies have a terrific friendship at the heart of the sketch show, which, as Thede jokes with DIRECTV, was "an unfortunate byproduct" of working together.

In all seriousness, Thede said it was an instant sisterhood on set.

"Every time we step on set there’s an instant family feeling and sisterhood ... I think it was just a byproduct of the fact that we were all so passionate about coming together to create this amazing show and this groundbreaking series," said Thede, adding, "It was really crucial that we hit matters that are important — different economic statuses, to the LGBTQ community, to just all sorts of different people — Afro-Latinas, Afro-Caribbeans, first-generation African. We wanted to really show the variety amongst black women so that a show that seems very singular and is specifically cast can be universally funny and universally appreciated."

This new dramedy stars Kat Dennings as a young woman who breaks up with her boyfriend...and realizes she has completely neglected her female friendships. So she embarks on a journey to reconnect with them, which creator Jordan Weiss says will not only celebrate that type of "love story" but also be complicated and messy, as love stories often are.

"I feel like, at least in my life, the most important emotional relationships that I've had are with my female friends," said Weiss. "So I wanted that version of a romantic comedy, that version of a love story that is between these platonic friendships. And so codependent sometimes, perfect sometimes, awful sometimes. It’s just sort of the whole picture."

Dollface actually has an almost entirely female cast, crew, editing team, and writers' room. Star Brenda Song told DIRECTV that it was incredible to go to work on a female-driven show.

"This is a first for me to work on such a female-driven show, and I love it," said Song. "Because it felt, I mean, it sounds so cheesy, but every single day was like going to camp with your friends ... I think that’s what makes such a difference."

Dead to Me (Netflix)

Liz Feldman can also attest to the power of working on a female-driven show. She is the creator of Dead to Me, a show about two women who meet in a grief support group for bereft spouses.

"I wanted to focus on the power of female friendships. When I think about the women in my life, the kind of woman I am and hope and strive to be, these are women who are multilayered. They are flawed," said Feldman. "The kind of women that ... straddle the sort of good and bad that's in all of us ... I view life as funny and dark and absurd and heartbreaking and heartwarming and all of the things, hopefully, that's what you feel when you watch Dead to Me ... And obviously, in being able to work with actresses like Christina Applegate and Linda Cardellini and the actor James Marsden, you know, I'm very blessed in that they bring such humanity to the roles that they play."

Great shows about female friendship don't always begin that way. Such is the case with The CW's new mystery show Nancy Drew, which stars Kennedy McMann as the title character and Leah Lewis and Madison Jaizani as her two best buds George and Bess. But the trio doesn't start as friends in this adaptation.

"I play George Fan. And she is not Nancy’s friend, actually. Plot twist," Lewis told DIRECTV with a laugh, adding, "She's the town screw-up. She is just this really tough girl that kind of really doesn’t run on Nancy’s wave ... But as you see her work with Nancy, her barrier starts to break down a little bit, even though that's not what George wants. And, yeah, George didn't really like Nancy that much in high school, but we'll see how that pans out."

"So I play Bess Marvin. The girls really don't know why I'm here, and I've come to this small town. It doesn’t quite make sense. ... She definitely is trying to make friends. So, yeah, it would be interesting to see how buddy-buddy we get," Jaizani told DIRECTV.

Luckily, there are plenty of mysteries afoot to promote sisterly bonding. Creator Josh Schwartz tells DIRECTV, "Mysteries are also a way of pulling the characters together. In the beginning, it’s like Nancy’s like, 'I work alone. I don’t need these people who think they’re going to help me.' And she actually finds that she needs them both for friendship but also to help her navigate through these mysteries in the town."

Friendships aren't the only relationship that can celebrate women supporting one another. The new Batwoman on The CW features Ruby Rose and Nicole Kang as stepsisters Kate Kane and Mary Hamilton, respectively. Kang told DIRECTV that her character absolutely idolizes her stepsister and wants to help her in any way she can.

"[Mary] is a certain type of younger sister who looks up to Kate, who wants her attention, who wants her approval, and the list goes on. And so that’s been really fun to explore in the family dynamic," Kang said, adding, "It's interesting because sometimes people in your given family or chosen family see you better and clearer than you see yourself sometimes. So I'm like Kate's number-one fan, and in that way, I believe that Mary sees all the best in Kate, and she's really attuned to the ways that she's hurting and the ways that she's trying ... So I think Mary is hoping for a chance just to reintroduce herself and create a closer relationship."

Co-star Rose adds that Kate doesn't really have time for her bubbly stepsister — until Kate discovers that there is more to Mary than meets the eye.

"What happens throughout is I discover her secret, and suddenly, it's like, wow. There's a whole side of you that I didn't even realize was possible," says Rose. "You do amazing things ... There are other people doing good things, and there are people right in front of me that care about the world and that care about me and that are doing things that I didn't notice."

In addition to all of these recently debuted or upcoming shows, there are shows all over television where women are coming together to help one another. There are Big Little Lies and Insecure on HBO; The Bold Type on Freeform; Better Things on FX; Call the Midwife on PBS; Grey's Anatomy on ABC; Vida on Starz; and the recently-ended Jane the Virgin and Crazy Ex-Girlfriend on The CW.

We'd love to see this trend continue. For more stories of powerful women, check out all the offerings on DIRECTV.