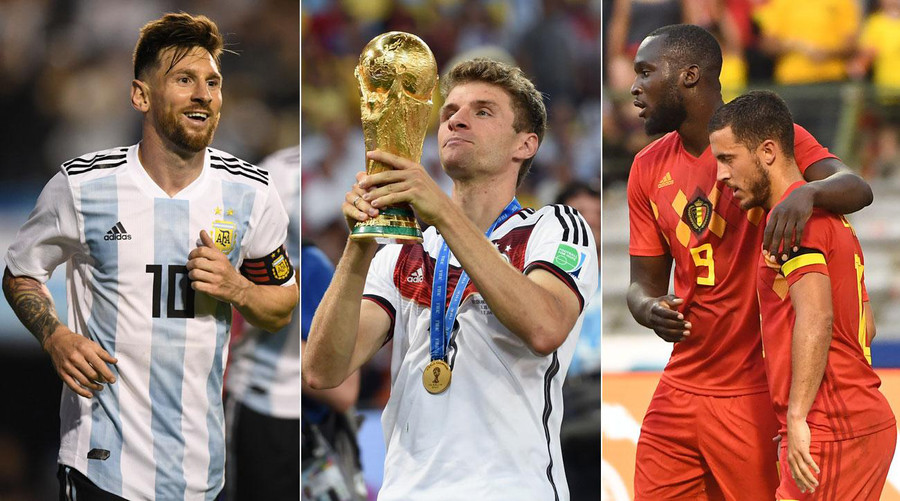 Colombia loves its fútbol, and the country—the second most populous in South America—is home to big, successful clubs and iconic players. There’s no question it’s an important soccer nation. And four years ago, Colombia threw a big parade for its national team, in the capital of Bogotá, shortly after it was eliminated in the World Cup quarterfinals.

Soccer may be the most universal and accessible of sports. But at the highest level, it’s also really, really elitist. The same clubs dominate Europe’s top leagues, season after season. The same men share FIFA’s player of the year award, year after year. And the World Cup, the biggest tournament of all, is similarly stratified and notoriously exclusive. Only eight countries have won it, and since Argentina claimed its first back in 1978—40 years ago—only two more have joined that list. The last time a World Cup final featured a team that isn’t among those eight or the Netherlands, which probably should’ve won one by now, was 1962. And that nation, Czechoslovakia, no longer exists.

So, it seems World Cups often are defined by honest goals and expectations (even the eternally optimistic and relentlessly competitive Jurgen Klinsmann said in 2014 that talking about a U.S. title “is just not realistic”). For some, it’s trophy or bust, and for some, it’s a parade honoring a quarterfinalist. For others, celebrating qualification and avoiding embarrassment are the top priorities.

So with that in mind, Planet Fútbol takes a look at the hierarchy in the upcoming World Cup, which kicks off next week in Moscow. This competition has a tendency to remind most nations of their place. Occasionally, a team jumps a tier during the tournament—but rarely two. If they do, then expect a parade.

Countries are listed within a tier in alphabetical order, with World Cup group and new FIFA ranking included.

In it to win it

All are former champions, all are stocked with world-class talent and none of these nations will be happy unless they leave Russia with the trophy. One of them likely will.

If the tournament goes to form, we could see Brazil-France in one semifinal and Germany-Spain in the other. But neither is anything close to a sure thing. Brazil’s success still hinges on Neymar’s health and happiness. There’s been a bit of a changing of the guard with Spain. Germany’s quest to repeat faces longer odds historically (no one’s done it since 1962) and France faces questions of tactics and temperament. Nevertheless, this is the cream of the crop.

The tier of talismans

These are decorated countries that have high expectations. They’re good, but not top-tier good, and they'll attract attention mostly due to the fascination with three all-time greats contesting the final World Cup of their prime.

Lionel Messi, Cristiano Ronaldo and Luis Suárez all have some help. But in reality, considering their talent, influence and age, this World Cup summer is more about this trio of talismans than their teams’ collective potential. As they go, so do their nation’s title hopes.

Dreaming of the semifinals

Strip away the pedigree that so often seems to come into play, and these teams certainly have the potential to knock on the final-four door. Belgium is the top squad in this tier, and a semifinal spot would come as little surprise. But the Red Devils’ golden generation hasn’t produced yet, falling in the quarterfinals in Brazil in 2014 and then again at Euro 2016. So here they sit for now, alongside four teams that have the experience, and enough top-class talent, to make a run.

Regarding Concacaf’s best hope, Mexico, expectations may be tempered for some because of a brutal draw. Group F is a tough one, and finishing behind Germany means a likely round-of-16 date with Brazil. But the fatigue and frustration caused by six consecutive second-stage eliminations means success will be defined by whether El Tri reaches that elusive fifth game.

With a few breaks or bounces, these teams are capable of a quarterfinal spot that would thrill fans back home. Denmark (Christian Eriksen), Egypt (Mo Salah), Peru (the exonerated Paolo Guerrero) and Poland (Robert Lewandoski) have stars capable of firing their team to glory. All also received draws that paved the way to the second round (Peru and Denmark likely will decide second-place in Group C).

Nigeria and Switzerland are more balanced squads, but both have potential. Nigeria arguably is the most talented African team in the tournament, and the Super Eagles boast enough players at high-level clubs to have raised expectations. Switzerland often is overlooked, but it's proven tough to beat and should get out of Group E.

Best of the rest

None are favored to get out of their first-round group, but there’s something about each team here that’s worth watching. Senegal has genuine quality in the likes of Sadio Mané and Keita Baldé. Sweden-minus-Zlatan showed its resolve eliminating Italy in a European qualifying playoff. Serbia has the grit to contend in Group E. Costa Rica has the experience and confidence earned during its incredible run to the 2014 quarterfinals. Japan is a veteran team that remains Asia’s most likely contender, and Morocco is marshaled by Juventus defender Medhi Benatia.

And of course, there’s Iceland, which has a decent resume for a tournament Cinderella. It ousted England at Euro 2016 then won a World Cup qualifying group featuring tournament semi-regulars Croatia, Ukraine and Turkey.

They’re thrilled to be here. But that’s not necessarily a negative—the World Cup is supposed to be for the world. There will be significant pressure on Russia, the tournament’s lowest-ranked team, to avoid joining South Africa as the only host nations eliminated in the group stage. But for the rest, every point will be worth celebrating.

Panama will be Concacaf’s potential feel-good story (it’s not their fault the USA choked). The joy Los Canaleros exhibited when qualifying for the first time was awesome to behold, and a roster featuring six MLS players offers some fans in the U.S. a bit of a rooting interest. At a World Cup, what goes on outside the velvet rope can be enjoyable as well.

This article was written by Brian Straus from Sports Illustrated and was legally licensed through the NewsCred publisher network. Please direct all licensing questions to legal@newscred.com.