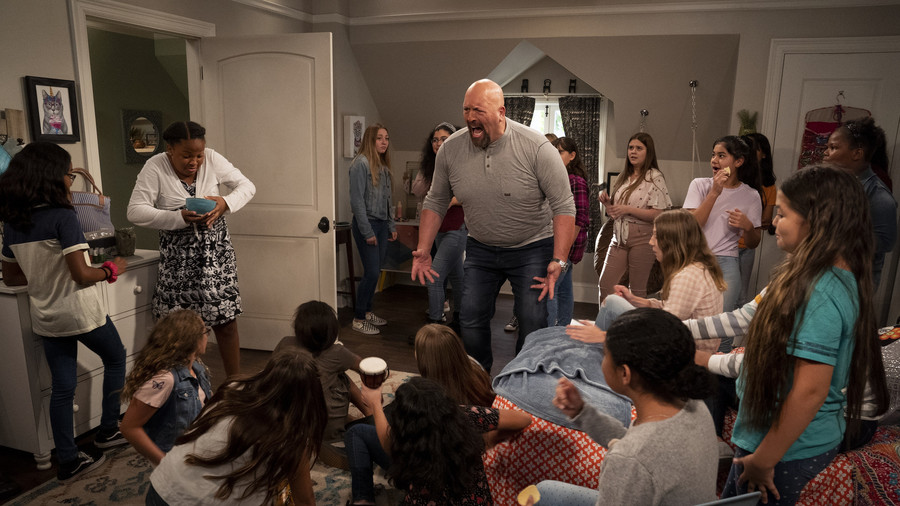 Wrestler Big Show: I want to show a different side with Netflix comedy

Wrestler Big Show has said he wanted to show a different side of himself with his new Netflix family comedy.

The WWE Raw star, real name Paul Wight, plays a version of himself as a wrestler who is now at home caring for his three daughters in The Big Show Show, and said he was hoping people would see he is not the character he plays inside the ring.

“If I had a quarter for every time somebody has walked by me and gone ‘Oh I would hate to meet you in a dark alley’, my first thought is ‘Why? I might have a flashlight, I might know where we are. I’m thoughtful, I’m kind’.

“But giving people an inside look at the humanity and sincerity and the vulnerability, especially with everything going on now, this has got to be a good thing.

“This is going to give people a chance to escape and for me, I want always to do things different than what people would expect from me.

“I had a role and a responsibility as a character in WWE, to perform a certain way, but to steal a line from Shrek, I’m like an onion, I’ve got layers.”

Discussing how close his on-screen character is to his real personality, the seven-time WWE world champion, who stands at 7ft tall and weighs 400lb, said: “Sure there is the Big Show character, the size and the presence speaks for itself, but the vulnerability is brought out, being a dad, the love he has for all of his girls, and the willingness to make fun of yourself, make your daughters have a better day.

“I think every dad can relate to that, there is not a dad in the world that hasn’t had his nails painted by his daughter. If you’re a dad and she wants to paint your nails, you let it happen, if she wants to bake cookies with sprinkles and pink hearts, you do it. That is just part of being a dad.

“I think it’s going to resonate in a very authentic way with a lot of dads, they are going to shake their heads and go ‘Yeah, I’ve done that too’.”

Asked if he hopes the new show will lead to more of this kind of acting work, he said: “That would be beautiful, that would be fantastic.

“Of course that is going to be up to Netflix but this is available worldwide and there are people who I have built a relationship with over the past 25 years and hopefully this is  going to give them some comfort in this time and remind us how important the family unit is.

“And hopefully it will lead to me being able to do more of this.

“Even if I never get to do this again, this has been one of the most incredible experiences that I have ever had in my life, I’ve got three new daughters (the actresses that play his on-screen children) that I will know the rest of my life and be involved in their life.

“I’ve got a great new friend who is a close confidant, the best TV wife ever, Allison Munn.

“Hopefully this is something I can continue to do a lot more of, if it doesn’t work out personally for me, I’m very grateful and extremely thankful for the opportunity to put this out.”

The Big Show Show is streaming on Netflix now

This article was written by PA Senior Entertainment Correspondent and Laura Harding from PA Snappa Service and was legally licensed through the NewsCred publisher network. Please direct all licensing questions to legal@newscred.com.