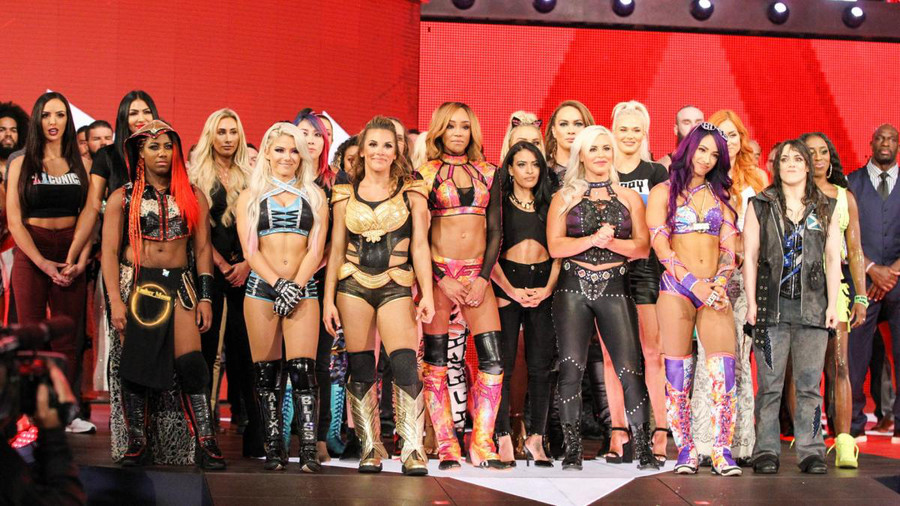 Evolution, Babies, and Blackhearts – WWE This Week: 5 THINGS WE LOVED AND 3 WE DID NOT

WWE is setting the table for SummerSlam and beyond this week with huge announcements, flying babies, and blackhearted championship matches!

Find out how the WWE Superstars are faring this week on their road to the Barclays Center in Brooklyn on August 19th with five things we loved (and three we certainly did not) below!

Well this is a big deal. And it's about damn time.

After weeks of rumors and speculation (and decades of build up), WWE this week finally announced on RAW that the women will deservedly get an entire pay-per-view all to themselves. With every woman on the current traveling roster on the ramp, WWE Chief Brand Officer, Stephanie McMahon - joined by her husband and COO Triple H, as well as her father, CEO Vince McMahon - proudly announced Evolution, the WWE's first ever all-woman event taking place this October 28th at Nassau Veterans Memorial Coliseum on Long Island.

In addition to every woman currently on RAW and Smackdown LIVE!, expect retired veterans and women's wrestling luminaries Trish Stratus and Lita, as well as various stand-out NXT talents, to make an appearance at this monumental event.

In a shocking turn of events, Tomasso Ciampa - aka the Sicilian Psychopath, aka the Blackheart, aka the current blood enemy of former best friend, Johnny Gargano - defeated the Dutch Destroyer, Aleister Black, to earn the NXT Championship on this past Wednesday's episode of NXT.

This match had it all. Interference! Ref bumps! Psychology! And above all, Grade-A wrestling.

While we fully expect this to eventually lead to a Ciampa v Gargano title match at NXT Takeover: Brooklyn, we mostly look forward to Ciampa's reign of (delightful) terror in the meantime.

LOVED: Nothing He Can't Do

Are you ready to walk with Elias...in your earholes?

WWE's kimono-clad troubadour, Elias, has finally dropped his debut EP (now available on iTunes and Spotify!) and it is perhaps the most important piece of music since "Ode to Joy".

We could go on and on about the Clapton-esque guitar work or the soulful lyricism, but well just let the man himself tell you exactly why whatever town you live in is a truly awful place:

We will admit, we've been concerned about Kevin Owens lately. The Kevin WEEE know would never try to be friends with..well, anyone. This is, after all, the man who powerbombed his best buddy, Sami Zayn, onto the ring apron, nearly breaking his spine, on his very first night in the company.

So after weeks of seeking to align himself with the current Money in Bank briefcase holder, Braun Strowman, with all manner of niceties, and failing, it was encouraging to see KO reach a breaking point this past Monday. Though he didn't actually DO anything (yet), he did deliver some ominous words in Braun's direction that hopefully portend a return to wonderfully vicious form that we've been missing out on for months now.

We won't have to wait too long to find out, however, as Stephanie McMahon and, reluctantly, RAW general manager, Kurt Angle, decided that KO will face Braun for the Money in the Bank briefcase at SummerSlam. Color us giddy at the thought of KO with the case! He will be just the worst!

LOVED: On Board with Baby

In the ongoing saga of Daniel Bryan and the Miz, we've gotten to a point where not only bringing a baby (or rather, "baby") to the ring is acceptable, but also preparing to fight a man with said baby strapped to his chest, and/or tossing said baby in order to distract, and then kick in the face, your mortal enemy, are all now on the table.

While this certainly isn't the first use of a baby as a foreign object in the ring, it's certainly the most recent, which in the world of wrestling, makes it the best.

OK look, Brock Lesnar and Roman Reigns are both great talents working at the highest level in their industry. There is no denying this. And after defeating Bobby Lashley on Monday, Roman has earned yet another opportunity to face Brock Lesnar for the Universal title at SummerSlam in Brooklyn next month.

But we've seen some version of this match 3 times already. And I don't really remember any of them.

Combine that with the fact Brock, despite being Universal Champ, is basically a phantom at this point, and Roman, who has been shoved down our throats as "The Guy" for years despite never being able to beat Lesnar, makes the chances of this match getting booed out of Brooklyn (again) extremely high.

HOWEVER! The added wrinkle of the aforementioned KO/Strowman Money in the Bank match makes the likelihood of shenanigans equally as high, and therefore, possibly amazing?

NOT SO MUCH: Ellsworth Fired. Again.

Everyone loves an underdog story, even if that dog is kind of a twerp. And therefore we are saddened by the apparent second firing of James Ellsworth in less than a year, this time at the hands of Smackdown Live! general manager Paige.

Will Jimmy Dream rear his chinless head at Evolution in October to once again help Carmella?

NOT SO MUCH: The Authors of Pain Get Edited by Titus Worldwide

The Authors of Pain are two huge gentleman who ran roughshod over much of the NXT roster the last couple of years before getting called up to Smackdown Live! after this year's Wrestlemania. We were excited to see the Wordsmiths of Woe continue to pen a tome of agony, using the blood of their opponents as their ill-gotten ink.

Then they disappeared. For a long while. Then, this week, they reappeared! Aaaand were immediately punked out by a (mostly) comedy act, Titus Worldwide.

Sadly, it might be time to go back to the drawing board for the Essayists of Unease...