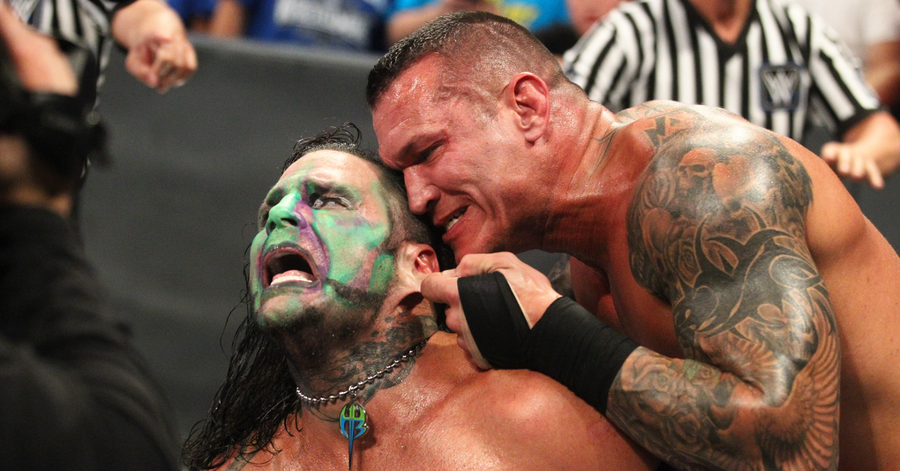 WWE This WEEK: 5 Things We Loved and 3 We Did Not

SummerSlaaaaam and the livin' is easy. Unless you're Jeff Hardy. Then various parts of your body are clinging on for dear life.

Find out how the rest of the WWE Superstars are faring this week on their road to the Barclays Center in Brooklyn on August 19th is shaping up with five things we loved (and three we certainly did not) below!

LOVED: The Miz' Very Respectful Eulogy for Team Hell No

The recent reunion of the once-popular Team Hell No was short-lived, ostensibly due to a leg injury suffered by the Devil’s Favorite Demon (and definite future mayor of Knoxville, Tennessee) at the hands of the Bludgeon Brothers.

Ever the empathetic coworker, The Miz, decided it would be in good taste to eulogize the seemingly defunct team of Daniel Bryan and Kane with a mock funeral on this week's SmackDown Live! complete with pallbearers, sullen handshakes, and wreathes of flowers behind a Kane mask on a pillow. You know, the usual.

Bryan, naturally, was not amused. But we certainly were! If for no other reason than this appears to be the official kickoff to the loooong-gestating Bryan/Miz feud that started back when DB was still on the shelf with what were, at the time, career-ending (though thankfully not) neck issues. Will these two finally clash at SummerSlam? If we had to prognosticate, we’d say that’s a DB-approved YES!

Former NXT champion and all around stand-out talent, Andrade “Cien” Almas, finally resurfaced along with his manager Zelina Vega after all but disappearing in recent weeks to wrestle Sin Cara (yet again) in his first WWE pay per view appearance at Extreme Rules in Pittsburgh on Sunday. Unfortunately for both Almas and Sin Cara, their exceptional match played to a nearly empty house as the first match of the kick-off show leaving fans of El Idolo, and probably the man himself, wondering when he’d ever get an opportunity to shine in front of more people.

Almas and his fans didn’t have to wait long, however, as he faced perhaps the best wrestler working today and current WWE champion, AJ Styles, in the first match of the night on Smackdown Live! Tuesday night. It was immediately clear that these guys had great in-ring chemistry as they took each other to the limit in what was certainly the match of the evening.

It has been said many times that Randy Orton is only really good when he’s really bad. This tenet held true once again as the Viper, for reasons still unknown, slithered out of hiding Sunday night to deliver a savage boot to the crotch of Jeff Hardy, who had only juuust been racked moments earlier by low-blow aficionado, Shinsuke Nakamura, a move which won Nakamura the US Title in under 6 seconds.

And that was the end of that!

Orton materialized once again on Tuesday night’s Smackdown Live! broadcast during Hardy’s rematch with Nakamura to once again brutalize the Charismatic Enigma. However, it was not Jeff’s grapefruits that suffered this time, but our own very eyes as Orton appeared to nearly rip off Jeff’s gauged earlobe during his assault. There are no "official" WWE clips, but trust us. It. Was. GROSS. After flushing our eyes for 5 straight minutes we were still left asking, “Why, Randy?! Dammit, WHY?!”

Becky Lynch was much ballyhooed as one of the Four Horsewomen of NXT and quickly became a fan favorite when she got called up to the main roster a couple years back. However, 2017 was a bit of a bummer for fans of the Irish Lasskicker as she couldn’t seem to win consistently and didn’t seem to be much of a focus for the WWE Women’s Division.

Lately, however, her luck seems to be turning around as she’s picked up several wins the last few weeks culminating in a victory over relative newcomer Mandy Rose on Tuesday night. This led to the announcement of a match next week pitting Lynch against current Smackdown Live! Women’s Champion, Carmella, in a non-title bout. But if Lynch wins, she’ll get to face off against Money Mella again, but this time in the middle of Barclay’s Center next month at SummerSlam for the belt.

Let’s be honest, Rusev should be a champion right now. But instead of gold, fans of the Bulgarian Brute have had to settle for a daily holiday instead, which, on this Rusev Day, still has us elated.

While the build-up to his battle with AJ Styles at Extreme Rules on Sunday left a lot to be desired, their match, much like AJ’s match with Andrade Almas on Tuesday, proved that the Rusev can and should be involved in the title picture at all times. Or at least wrestle AJ much more often.

NOT SO MUCH: The Pittsburgh Crowd at Extreme Rules

Continuing the unfortunate trend of wrestling audiences spontaneously doing anything they can to distract from PPV matches, the Pittsburgh crowd nearly ruined what was an otherwise amazing bout featuring Seth Rollins v. Dolph Ziggler for the Intercontinental title by counting down the last ten seconds of EVERY minute of their impressive 30-minute Iron Man Match. Get it together, Steel City. Jeez.

NOT SO MUCH: Bayley and Sasha Banks Tread Water

Building for years, what should have been an amazing blood feud between two of the original Four Horsewomen has turned into awkward backstage conversations and...therapy.

NOT SO MUCH: The Deleters of Worlds' Downward Spiral

The Deleters of Worlds, featuring two of the biggest weirdos in WWE at the moment, Woken Matt Hardy and Bray Wyatt, battled against the much less impressive B Team (Curtis Axel and Bo Dallas) to retain their RAW Tag Team titles...and lost. Perhaps another dip in the Lake of Reincarnation will produce more worthy vessels through which the Deleters could reinvigorate their expedition of gold? And trust us, that question totally makes sense.