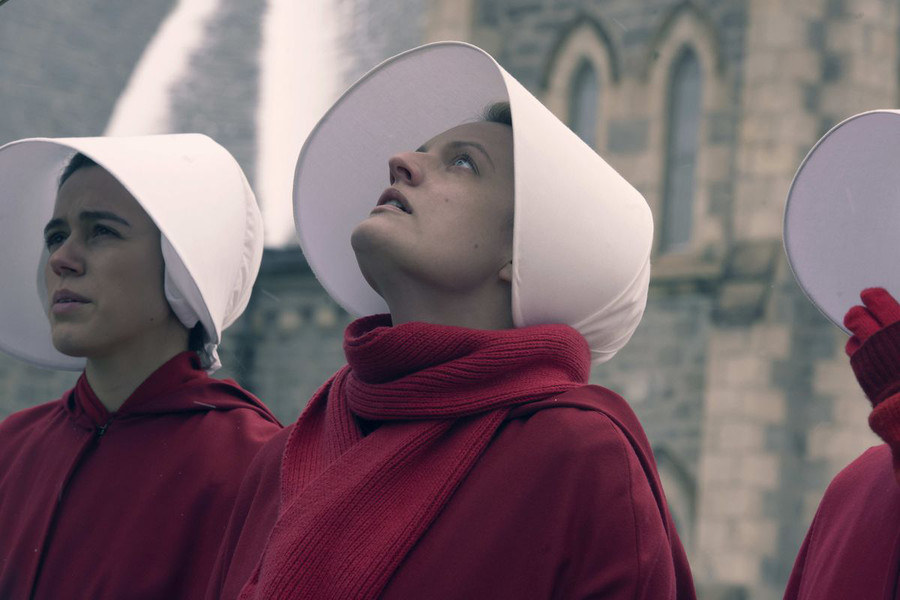 "Once upon a time, at the start of Gilead, Fred and Serena were truly intimate," says Yvonne Strahovski. And for a brief moment, in the 11th episode of the third season of "The Handmaid's Tale," it seemed like they would be that way again. But, Strahovski's Serena being as cunning as she is, and being so singularly focused of late on reuniting with baby Nichole (nee Holly), reconnecting with her husband came with an agenda.

In that 11th episode, entitled "Liars," Serena and Fred (Joseph Fiennes) took a road trip. On their adventure he actually allowed her back behind the wheel of the car to drive for a stretch of open road, and she allowed him to be intimate with her. And then they prepared to pass over the Canadian border, Serena having told Fred about Mark (Sam Jaeger), and Fred trusting her trust in this new friend.

"Given the lead up to it and how they were intimate together and how things have been looking up, if he does truly want Serena back in the type of way they were at the start of Gilead, then he's just going to have to go with it," Strahovski tells Variety. "He's been trying to prove himself to her all season and show that he can be committed and that he's not going to chop off another finger. So, he's committed to pleasing her, and that means giving her what she wants."

But Fred overlooked that what Serena really wants is the baby -- and maybe a bit of revenge. "She wanted to stick it to him," Strahovski admits. Certainly, "she knows exactly what's going to happen" when she convinces her husband to travel to a place where he is seen as a war criminal. She was the one "who would have come up with a deal that she could craft for herself and pitch it to Mark," but their conversations would have been about how to keep her safe as an asylum seeker who is turning in a criminal (i.e. Fred).

Like most decisions Serena makes, Strahovski feels this one was a "slow build" as she thought out how it could work -- and to a degree what she needed to do with Fred to ensure he trusted her enough to believe he, too, would be safe up there. Strahovski doesn't think there was one recent catalyst that changed her mind about taking up Mark's offer for help, but rather it was "a bunch of building blocks" on which she kept ruminating.

Starting with Fred beating her and cutting off her finger in the second season, Serena's antennae were more than at attention regarding her ultimate place in Gilead. The loss of Nichole set her off completely, and getting a few moments with her earlier in the third season stirred something in her that told her she needed to act. She took the secret phone from Mark then, undoubtedly to begin planning for when she could see Nichole again, and in a more permanent way. But, Strahovski points out, Serena did try to make it work with Fred, too.

"We spent the whole first few episodes of the season basically walked away from Fred, basically given up on him, only to kind of come back to him with the inspiration of seeing the Winslows and how perfect their family was and how many children they had and D.C. It was sort of like one last-ditch effort to entertain the idea that maybe Fred could work for her. But it was just never going to," she says.

That, coupled with the temptation of being with Nichole, she says, is what convinced her she had to make the change. And once she decided to go to Canada, she started saying her goodbyes to Gilead.

"I don't think it was easy for her to walk away from Fred," Strahovski admits, which is why her being intimate with him one last time was not just about needing him to feel in love and 100% trusting of her. She also made sure to "say the things that she wanted to say about how he held her back and how she brings up her book" while they were on the road trip because "I think it's really difficult because I think she still cares for him -- I think she really wanted it to work. So it's saying goodbye to something that she is going to mourn, and she does feel guilty about the decision she made."

Still, Strahovski says Serena didn't really have a choice about bringing Fred along for the ride when she decided to go to Canada. "I don't think she would have ever felt safe. That would have been such a betrayal for Fred, and if he was still free, I think he would just hunt her down and make her life miserable," she says. "She knows he would have gotten to her now or sabotaged whatever she had planned for herself and Nichole in Canada. She knows how they work: They have people on the ground in Canada. She has to do that to protect herself but maybe wishes she didn't have to do that -- but that's his own fault: He made the bed, and now he has to lie in it."

Shooting some of those final Gilead moments with Fiennes, Strahovski says was bittersweet for the character but joyful for her, getting to infuse a bit of light and reveal in a taste of freedom, especially when she was driving.

"She's behind the wheel, she's taking charge and I guess it's symbolic of her taking charge of her life," Strahovski says. "There's that great moment where she looks at the road behind her and where she's come from and then she look ahead at where she's going, and it's a private moment of, 'Am I doing this? Yes, I'm doing this. I'm going to do this.'"

But when Serena finally settles into Canada in the penultimate episode of the season, entitled "Sacrifice," things are not nearly as "cut and dry" for her as she had hoped. Sure, she "did something that's part of this resistance theme for Season 3," Strahovski notes, but she isn't celebrated for it. And Fred confronts her with how that affected him, proving her concern to be fact that if he somehow gets free, she is in big trouble. And the thing she wanted most -- to be with Nichole -- doesn't happen the way she had imagined it. She gets supervised visitation with the baby, brought over by Moira (Samira Wiley), who makes sure to remind the baby, in Serena's presence, where her home is and that Serena is not her mother.

"That's so hard for her. That's the only reason she went there, and it's so slow and she doesn't have the time with the baby that she imagined. It's so anticlimactic for her. But what is she supposed to do? She's just twiddling her thumbs and pining for the baby, basically," Strahovski says.

And her situation gets worse in the season finale, in which Strahovski says Serena will experience a "shocking slap in the face." But whether that sets up her situation for the recently ordered fourth season remains to be seen.

"Structurally things changed in Season 3. We got rid of the Waterford household, so that was a huge structural change, but without Serena and Fred's house they still played in the season. Obviously this [move to Canada] is going to involve another structural change," she says.

Serena's story has moved away from the titular character's completely now, but Strahovski says that shouldn't imply she will be seen less next year. "I certainly didn't have a conversation with them where I said, 'Hey guys, I need less scenes,'" she says, noting that the big film roles she has been booking are shooting in hiatuses. "I really love this role, and I love this show."

This article is written by Danielle Turchiano from Variety and was legally licensed via the Tribune Content Agency through the NewsCred publisher network. Please direct all licensing questions to legal@newscred.com.